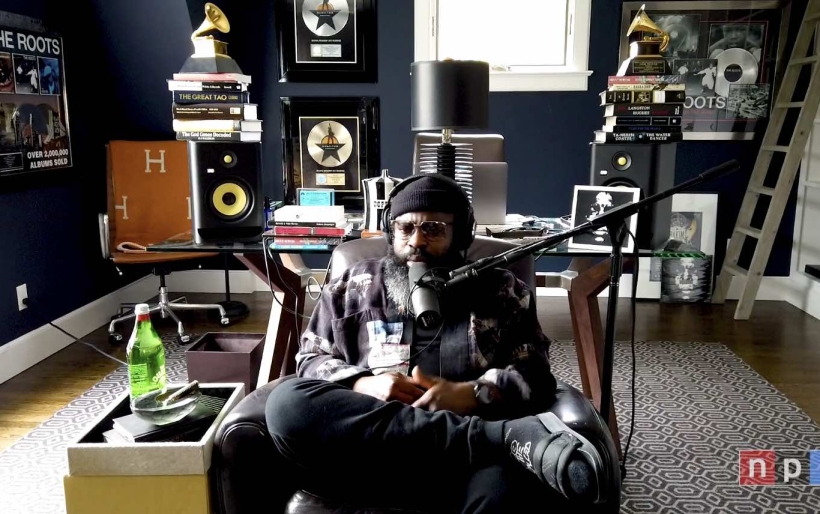 I like to imagine this is how Tariq “Black Thought” Trotter composes all his rhymes — seated in a cozy and chill chair, surrounded by Roots posters and bookshelves and a backdrop of Miles Davis records, Hamilton gold records and Grammys.

This was the scene at Thought’s recent Tiny Desk At Home concert with NPR Music, where he premiered three brand new tracks — “Thought vs. Everybody,” “Yellow,” and “Nature of the Beast.”

The first song is built around soulful beats and samples as it moves forward at a brisk pace — it’s chorus-free with continuous bars like “I’m a walking institution / I’m an HBCU.”

“Yellow” is rooted in a swing jazz arrangement and comes from a new musical Thought is starring in, Black No More, written John Ridley and based on a 1931 novel of the same name by George S. Schuyler, presenting race relations through an Afrofuturist lens by telling the story of a scientist who “solves the race problem” by marketing “a mysterious machine that promises to remove the burden of race from any person of color by turning them white.”

“Collectively we feel that this play has the potential to change the landscape of musical theater,” Thought says, noting that the lyrics were not easy for him to write. “As a proud black man, writing this number caused me to dig deep creatively. It challenged me, and you’ll see from the lyrics, I had to connect with feelings I’ve never personally felt, and it caused me to look at the world through a completely different lens.”

The performance closes with the very poppy modern rock song “Nature of the Beast,” and it shows Thought flexing his singing ability with assistance from John Baldwin Gourley and Zoe Manville of Portugal. The Man.