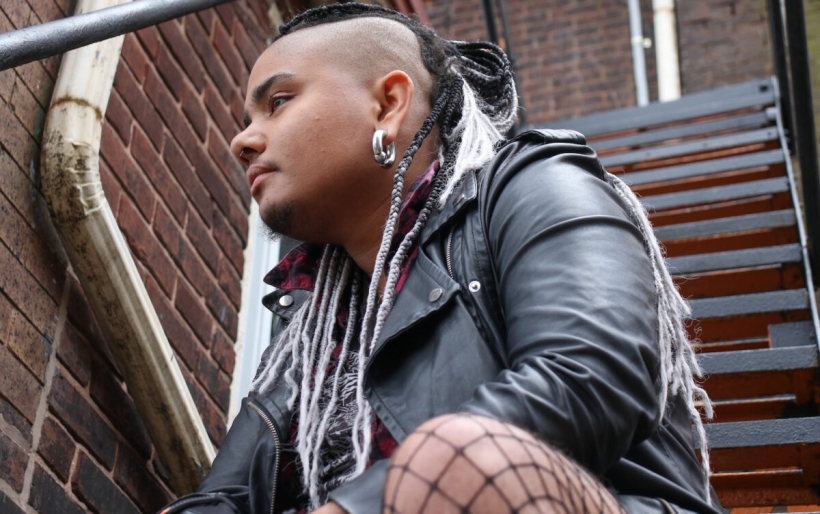 Overwinter | photo by Roxanne Drip | courtesy of the artist

On his debut full-length project under the name Overwinter, Philadelphia’s Francis Ponton travels an emotional road from dysfunction, to solitude, to lust and newfound connection, with alluring beats and melodic textures guiding the way.

Released today via local indie label Goodhowareyou Records, the Francis Winter LP eases to a start on “For U,” where a shimmering keyboard and a chopped up sample of Bill Withers’ “Make A Smile For Me” score the opening scene starring a character who knows they’re in a broken relationship, but can’t bring themself to leave: “even though it hurts me, I still say I’m yours” Ponton sings.

Samples and song references are no small part of the appeal of listening to Overwinter. Ponton is a musical omnivore with impeccable taste, and whether its a sideways nod to Led Zeppelin on “Makes You Wonder” — an uplifting bop about never letting hope and dreams out of your sights — or a retro lift of Amy Winehouse’s “Wake Up Alone” on “Loneliness” — where Ponton’s vocals yearn “when will you be by, when will you return / when will you come back, as my heart starts to burn” — the abstracted flips from his musical library perfectly compliment the emotional crux of whatever songs they land in.

Where the sleek title track features jazzy trumpet and upright bass, peeping through a wash of phase-sweep atmospheres, “Rainy Nights” (an pulsing instrumental clapper with an agitated synthpop tones a la The Weeknd and Chromatics) and “Late Nights and Smokes” (with its gear-crank rhythm on the minimal verse leading to a massive chorus) find our central character getting their groove back. The latter is the most filled with desire, as Ponton sings “When I’m around you, there’s no one else / In your arms, I simply melt.”

By the time we reach the closing “Nobody Knows,” the narrator of this song cycle seems rejuvenated, born anew, and it’s only fitting that the beat backing it is built around some serious mid-20th century gospel rock. It’s practically impossible not to feel some uplift from the jaunty piano and sea of voices taken from Pastor T.L. Barrett & the Youth For Christ Choir’s “Nobody Knows,” and it’s perfectly incorporated with Ponton’s slick beats and vibrant textures. Even if the conclusion at the end of this journey isn’t religious per se, it is no less of a cathartic release, and Overwinter’s production prowess hammers it home.

Listen below, and find more on the artist over at Facebook.