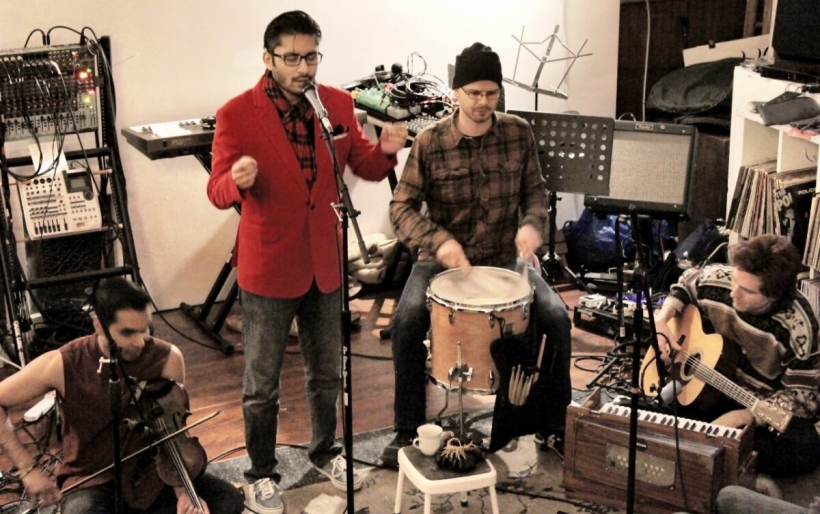 Falsa | photo courtesy of the artist

When he lived in Philadelphia, singer-songwriter and multi-instrumentalist Umer Piracha developed a name in the living room folk show scene for his atmospheric mixture of sounds inspired by Indian classical music and covers of songs by artists like Jeff Buckley and Radiohead.

As his presence on the scene grew, Piracha launched the project Falsa, which eschews the pop/rock covers and focuses on the more atmospheric, original side of his songwriting. Pulling on Sufi devotional music, Falsa’s songs expand and envelop the listener in a heady and reflective mix of horns, violins, droning harmonium, and meditative voice.

Piracha has since moved to New York and taken the project with him, and this spring, Falsa’s first studio recording has made its way onto Bandcamp.

Backed by Tom Deis on bass and harmonium, Paul Arendt on guitar, Siddharth Ashokkumar on Carnatic violin, Adam Hershberger on trumpet, and Greg Foran on percussion, American Sufi is punchy and powerful, bringing traditional sounds into an experimental, almost post-rock collective that sprawls across soundscapes that stretch from seven to ten minutes each, with Piracha singing lyrics inspired by Sufi poets Amir Khusrau, Rumi and Hafez, who he says “touched on something essential to human existence in their writings.”

Noting the uncertainty of the world as we all cope with the Coronavirus pandemic, Piracha “We felt it was a good time to release the album that we finally finished, even though we cannot tour, because people could use listening to healing and transcendant music.”

Listen to American Sufi below and grab a download at Bandcamp.