Checking In With... Ed O'Brien of Radiohead and EOB - WXPN | Vinyl At Heart 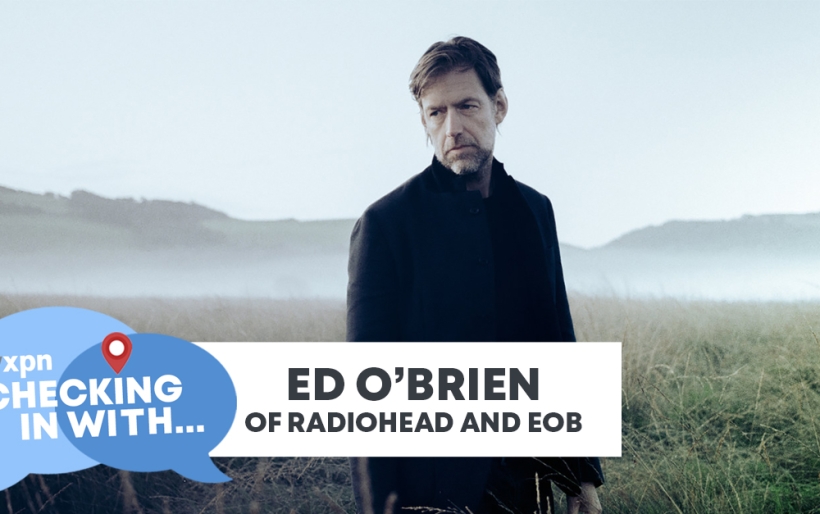 Checking In With… Ed O’Brien of Radiohead and EOB

In times of crisis, it’s more important than ever to check in on your friends and loved ones. Here at XPN, we’re Checking In With our extended musical family to see how they’re holding up during the Coronavirus quarantine…and what music has kept them grounded. Today, John Vettese chats with Ed O’Brien of Radiohead and EOB.

When we got Radiohead guitarist Ed O’Brien on the phone for our Checking In series, the first thing I wanted to ask was how he was feeling. A month ago, he Tweeted that he had come down with flu-like symptoms that he was reasonably sure stemmed from Coronavirus. And since tests were hard to come by, he was self-quarantining with his family at their home in Wales. O’Brien cheerily reported that he was doing much better: “It hung around for a while, and that’s the thing people seem to be saying, it stays in the system longer than you think. But I’m gradually gently getting a lot better.”

In the time since the pandemic hit, O’Brien has exploring the area around his home, posting stunning photos to Instagram of misty meadows, algae-covered rocks on a shoreline, the sun setting behind a cluster of mountains.

“We’re so lucky, I really don’t think we could be in a better place to self-isolate,” O’Brien says. “We’re in absolutely stunning countryside. We love it around here anyway: it’s really quiet, it’s wild, we’re living in a valley, and you can get on top of mountains and hills and its can be quite wild and barren up there. We’re really lucky, we’re in a really idyllic place to be riding this out at the moment.”

O’Brien’s debut solo album, Earth, released on April 17th and explores a poppier dance rock side of his musical leanings, reminiscent of Primal Scream and The Stone Roses. In our conversation, he reflects on how it’s a different role being a frontman, versus playing guitar at stage right; he also talks about the gigs that he and his bandmates did get to play before the industry shutdown happened, and how they’ve stayed in touch in the time since.

O’Brien made some breathtaking selections for his Checking In song picks; peruse those and listen to our whole conversation in the player below.

Checking In With Ed OBrien of Radiohead and EOB

“It’s probably, if I looked on my iTunes, it would be the most played song in the last 20 years. It’s extraordinary. First of all, you’ve got extraordinary musicians — João Gilberto singing and playing guitar, you’ve got Stan Getz on sax, you’ve got the incredible Tom Jobin, a great songwriter, on piano, you’ve got an amazing drummer Milton Banana. And it’s the moment where Brazilian music meet jazz. You got this beautiful Brazilian feel, this lightness, this spirit. And this melancholy. In Bossa Nova there’s a lot of melancholy, saudade is the Portuguese word for it: sadness, longing. and then you’ve got this incredible mellifluous, melodic, extraordinary sax solo from Stan Getz. This is one that whenever I hear, I get a spine tingle.”

Song That Raises Your Spirits: Requiem by Gabriel Fauré

“A requiem, for those who don’t know, is a mass, a piece of music for the dead, for those who have deported. So it’s got this weight to it, but also this incredible beauty, and this tender moment. I would ask if you could play the Sanctus movement — when I aa a kid, I sang it in a choir. As a kid, at nine or ten years old, you’re not really thinking — you’re more concerned about what’s going on on the bike, or a fight, you know? The kind of classical music you sing, it’s just one of those things you do. But I remember it was really a moment performing this, it was one of the moments where you awaken to the beauty of this thing you were involved with. I think it’s just one of those pieces of music that’s very somber, it’s beautiful. And when Im feeling down, that’s the kind of music I want. It’s almost like immersing myself in that mood and that emotion, and in order for me to come out, I need to process that and fully get into that mood, and that music helps me through it.”

Song That You’re Most Proud Of Working On: “Olympik” by EOB

“It was the last song that was written for the album, and for me it was always…the song around which the album orbited. I ways thought it was going to be the trickiest, and it was basically a live take with Omar Hakim, Nathan East, and David Okumu, and myself playing. And it was one of the magical moments in the studio, and they don’t happen that often. It’s as Quincey Jones says, he has this beautiful phrase for it, it’s when God walks through the room. You don’t know why it’s take four, or what it was that differentiates it from take three or take two. It’s sort of like you’re working towards it. And we did it, and we knew we din’t have to do another take. And it’s a long piece of music, and that kind of groove to keep it going, particularly for Omar who’s drumming, and Nathan on bass, to be playing with these incredible musicians is really a dream cone true. There’s a lot of emotion in that track, a lot of emotion in the playing, and those guys totally killed it, it was amazing.”