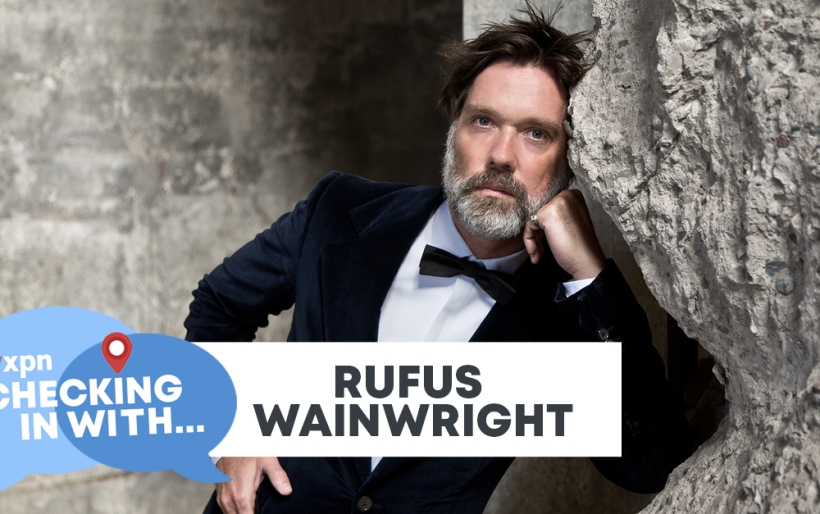 Rufus Wainwright | photo by Tony Hauser | courtesy of the artist

Checking In With… Rufus Wainwright

In times of crisis, it’s more important than ever to check in on your friends and loved ones. Here at XPN, we’re Checking In With our extended musical family to see how they’re holding up during the Coronavirus quarantine…and what music has kept them grounded. Today, Dan Reed chats with Rufus Wainwright.

Singer-songwriter Rufus Wainwright was at his home in Los Angeles when we caught up with him for Checking In, and had positive things to say about how his city and state were handling self-quarantining and social distancing…at least from his perspective.

“Thankfully we started this process earlier,” he says. “And it seems from my living room on television that it’s having a positive effect on what’s going on. Even though it’s hard to tell in general what’s going on. But you take your little victories when you can.”

He’s reflective about his position during the pandemic, even though he’s rethinking the approach to his next record Unfollow The Rules, due out later this year — he’s lucky to have fans, he says, who are loyal, and who will will wait for him to tour.

“I’m one of the happier stories in this whole saga,” he says. “To work in a restaurant and grocery store is on the front lines, or in the medical profession…it’s pretty brutal, so I have nothing to complain about.”

In our conversation, we spoke about working in both pop and opera; he got into the latter at age 13 when he heard Verdi’s Requiem for the first time, expanded into pop music and pop songs in his teens and twenties, but called opera “the secret ingredient emotionally, artistically, and spiritually” to his work. He also spoke about actually producing two original operas, encountering the harsh reality of that world, and finding way back to pop, with lessons learned. He also tells us about the first quarantine song he’s finished writing, and shared his love for music from Showboat and from his mother. Listen and read more below.

Checking In With Rufus Wainwright

“The Paul Robeson version is appropriate, it was the first version I knew, My parents were fans, and especially my mother was a huge Paul Robeson fanatic. So we listened to that a lot. And later on, the version that really cemented the deal for me was Judy Garland singing it on one of her TV shows. You really have to see the visuals to understand how explosive it is. And Paul Robeson was black, and Judy Garland was white, and it was one of those few songs that captured every aspect of where it came from. It was written by a Jewish person but it’s about slavery and it’s sung by a white person or a black person, but it still doesn’t matter because the message is so strong and clear. It’s one of the great moments in American music where all the desperation of our history tries to redeem itself in music, and becomes eternal and very valuable to us.”

Song That Raises Your Spirits: “First Born” by Kate and Anna McGarrigle

“I always have to preface this by reminding people and alerting people that it actually isn’t totally about me in a sense. It’s more about the phenomenon of the first born son. My mother had me at that point, so I was around, and I think she was experiencing a lot of very classic symptoms that occur to a mother with her firstborn. And she also looked to her friends who are first born, and she looks to the bible because she refers to Moses at the end. In a lot of ways it’s a cautionary tale to anyone who’s a first born, because you’re overloaded with all this attention and love, and then you get to the bridge and it’s like that doesn’t mean you’re going to make it. I’ve always been able to utilize it in a very substatntial way. It’s not all rosy and ‘I’ll love you forever and everything’s great and you’ll always be mine,’ it’s ‘you are very gifted and loved and get a lot of attention…and don’t blow it.’”

Song That You’re Most Proud Of Working On: “Going To A Town” by Rufus Wainwright

“It’s sadly it’s become a perennial song. Sadly in the sense of what the subject matter is, it’s how exhausting the United States Government is. I wrote it around the Iraq War but this whole period is certainly taking the cake, certainly in America. The Iraq war was certainly no picnic for people in the middle east. But Trump is so destructive of the country right now, and so the song once again has a lot of poignancy and a lot of that anger we seem to feel regularly. But in a weird way, and to give this a positive spin, I wrote this song because I love the United States. I’m from here, I live here, and when one listens to it, there’s a tragedy there…like you’re breaking up with your lover or parent in a way. It is a love song in the end, maybe with some sense of wanting to rectify the situation.”