Checking In With... Dave Alvin - WXPN 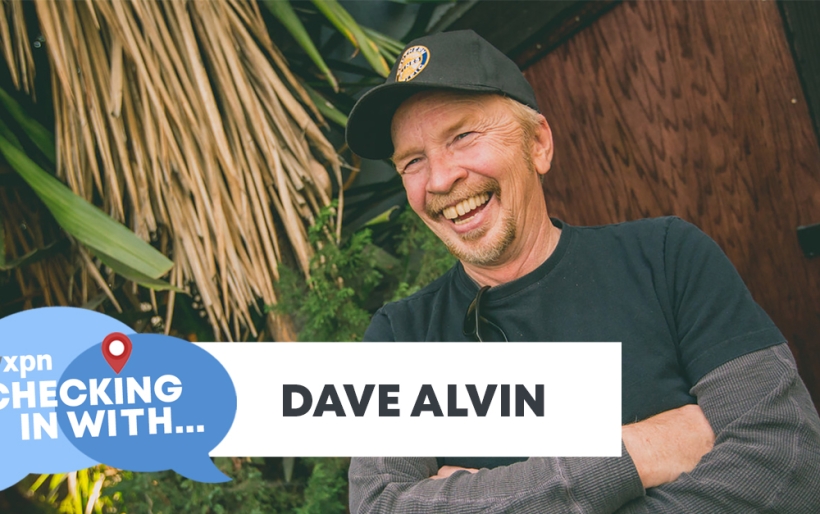 Checking In With… Dave Alvin

In times of crisis, it’s more important than ever to check in on your friends and loved ones. Here at XPN, we’re Checking In With our extended musical family to see how they’re holding up during the Coronavirus quarantine…and what music has kept them grounded. Today, Dan Reed chats with Dave Alvin.

Dave Alvin  is a Los Angeles legend, having done time in bands like The Blasters, X, and The Knitters, and rocked a robust solo career since the late 80s. His new album The Third Mind is out now, and he caught up with us via phone to talk about what his longtime hometown has been like since the Coronavirus pandemic escalated a month and a half ago.

“I haven’t really left the house for three weeks, maybe more,” Alvin says. “But I’m fortunate that…the house I have is on a hillside, so I have kind of a larger piece of property, I can go outside and there’s no one around me or anything, so that’s kind of nice. The air is unbelievable, you see the mountains every day, it’s even better than when we were kids, the air is stunning. There is a silver lining, but I wish we didn’t have to achieve it that way. “

In our conversation, we talked about the jazz improv influence on The Third Mind, and how Alvin looked to legendary recordings by Miles Davis for inspiration. He and his bandmates had “no arrangements, no rehearsals, the only thing we agreed on was keys. ‘Okay, it’s D minor, everybody likes D minor?'”

We also talked about L.A.’s punk scene history and how the city in the 70s and 80s found space for roots-oriented heavy rockers like The Blasters, and Los Lobos. Hear all this plus Alvin’s picks of favorite tracks by Sam Cooke and Glen Campbell below.

Checkin In With Dave Alvin

Favorite Song Of All Time: “Blowin’ In The Wind” by Sam Cooke

“One of the beautiful things about the song is its ambiguity. We know what the song is saying, but the way Dylan says it is so wonderfully ambiguous. Well, we’ll see, it’s in the wind. Sam Cooke had a unique voice, and his influence on other singers…I mean, I wish I could sing like Sam Cooke. I can’t even hit one note that resembles Sam Cooke. But you look at singers across the wide spectrum of music who were influenced by him — Rod Stewart, [Joe Perry] from Journey, so many R&B singers — I feel like, for all the hit records he’s had and how large his legend looms, Sam Cooke is one of the more underrated not only singers but visionaries in American music history. He knew fairly early on what he wanted and how he wanted to get it. He wanted control of his art on the business side. I admire Sam Cooke a lot; it’s not just the voice, it’s not just the good looks, that was a guy who had the whole package.”

Song That Raises Your Spirits: “Shenandoah” by Glen Campbell

“I remember the first time I heard it, I heard Paul Robeson doing it. And the combination of Paul Robeson’s voice but also the melody and, again, that word ambiguity. One of the great things about old folk songs is over the years, verses disappear, or verses change to fit whoever is singing it. It started out as an old fur trapper song of all things, about a fur trapper in love with the daughter of the Oneida chief Shenandoah. So it’s not really about the Shenandoah Valley, it’s about love. It’s such a classic American song because it’s about love and migration. It’s the ‘Louie Louie’ of American folk music. I love it, I don’t care how corny it is.”

Song That You’re Most Proud Of Working On: “Fourth of July” by Dave Alvin

“Normally with songwriting you work and work really hard. And sometimes those songs don’t work out because you’ve put too much effort into it. But it opens you up to accept the ones that just appear, and sometimes songs juts appear, and those aren’t always the best songs, but they are unique. And ‘Fourth of July’ just appeared. I’d written a long, four-page poem about this particular period of my life when I was very young, before The Blasters, and this young woman and I were living together and felt like already at 21 our lives were over. And one night I was siting with my girlfriend a decade later and we were watching our friends bowl and drinking beer, and I don’t know where the idea came from — I’d been working on another song — and then I realized ‘that four page poem you wrote, if you get rid of the three pages, and put this music to it, you’ve got a song.’ I ran home and twenty minutes later had ‘Fourth of July.'”