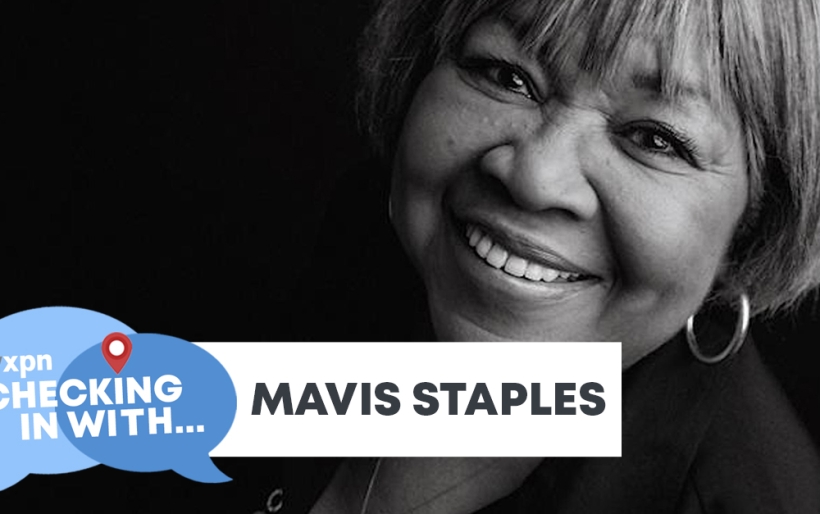 Mavis Staples | photo by Myriam Santos | courtesy of the artist

Checking In With… Mavis Staples

In times of crisis, it’s more important than ever to check in on your friends and loved ones. Here at XPN, we’re Checking In With our extended musical family to see how they’re holding up during the Coronavirus quarantine…and what music has kept them grounded. Today, Dan Reed chats with Mavis Staples.

Legendary singer Mavis Staples was at home in Chicago when we reached her for our Checking In chat. “It is crazy times, but we got to be strong,” she says of the health crisis, and notes that her new single “All in It Together” benefits My Block, My Hood, My City, an organization in her hometown that helps seniors get access to testing and treatment for Coronavirus. “The seniors need help. I won’t say more than anyone, but we have to take care of our seniors. “

The song was written with Jeff Tweedy of Wilco, and as we talk, Staples recalls meeting him and his band in a gig at The Hideout in 2008, and going on to become regular collaborators. “Now we’re family!” All of her song picks for Checking In seem to come with stories about meeting legendary musical figures, from Marvin Gaye to Mahalia Jackson to Prince. Hear it all in the player below.

Checking In With Mavis Staples

Favorite Song of All Time: “What’s Going On” by Marvin Gaye

“I knew Marvin and he was such a sweetheart. Actually, Marvin sent for me to come to Los Angeles back in the day, he was going to produce my next album. I was there for over a week, I told his people I think I should go home, Marvin he never got to me. So his wife came to the hotel and got me, took me to the studio, and Marvin was so busy. He was recording, was on the floor, he had a little lamp down there so he could  see his lyrics, and hitting the floor keeping the beat. I couldn’t believe what I was seeing. I stayed another couple days, and he told me ‘Mavis, I’m so sorry, I’m trying to get this album out, but we’ll meet again.’ And I said ‘Marvin, it’s okay, that was the best joy I got, seeing you down on that floor.’ He laughed. But we were friend, not really friends, but it was an honor to know Marvin Gaye.”

Song that Raises Your Spirits: “Precious Lord, Take My Hand” by Mahalia Jackson

“I grew up with the song, I was a church girl all my life. In fact, Sister Mahalia Jackson was my idol, she was the first female voice I heard singing a gospel song. And I was blessed, you know, they had the first black festival in New York, in Harlem, and Sister Mahalia Jackson was there, we were there, and I was sitting right next to her. And when it came her time to sing, she reached over and told me ‘baby you’re going to have to help me sing this song, Haley don’t feel so good today, I’ll help you.’ And I said ‘Yes m’am, I’ll help you.’ And when her pianist started playing this song, I knew what it was, she said ‘You go on, you start.’ She sent me up to the microphone, and I started singing ‘Precious Lord.’ I was about 17, I was still in high school, and it was the best, it was a moment I will treasure and cherish all my life. I can still visualize it. Cause she joined me, someone helped her up to the microphone, got through the first verse, and then there I was on the same microphone with this great lady.”

Song You’re Most Proud of Working On: “Time Waits For No One” by Mavis Staples

“My father called me, and said ‘Mavis, this man Prince is looking for you.’ And I said ‘Pops, what prince, I don’t know no prince?’ He said ‘The one they call purple.’ I said ‘No, not Prince! What does he want with me, daddy?’ He said ‘take the man’s number and call him.’ I called the next morning, and I get Prince’s manager, and I asked ‘why would Prince want to produce me? I can’t sing no songs like Appolonia and Vanity, like “you nasty boy.” I’m a grown woman! I need a song of substance.’ And he said ‘Ms. Staples, Prince is very much aware of the nature of your talent. And he will be writing adult songs for you.’ And I said ‘okay, that sounds better.’ I called my manager at the time, they got together, and next thing I know I was on the Paisley Park label, going to meet Prince. I was so excited. His secretary called a week later and said ‘Ms. Staples, Prince would like you to come to his tour in Paris.’ I said ‘Did you say Paris?’ I never go anywhere by myself, so I said ‘Can my sister come?’ She said ‘I don’t think that will be a problem.’ So Yvonne and I went to Paris to Prince’s LoveSexy tour. We has The Staple Singers, we had our song “When Will We Be Paid For The Work We’ve Done,” he fell in love with that and he recorded. And I read that he started his last show with that. When we met, he said ‘Yvonne, Mavis, you all sing ‘When Will We Be Paid’ for me!’ We said okay, and started singing and there’s this one part in the song where we sing ‘We’ve stumbled through this life for more than 300 years.’ And I stumbled, but Yvonne didn’t stumble — we had a little choreography to go with it. And he told Yvonne, ‘Yvonne, you didn’t stumble, you have to stumble.’ And she said ‘I’m not on stage! We’re singing this for you.’”