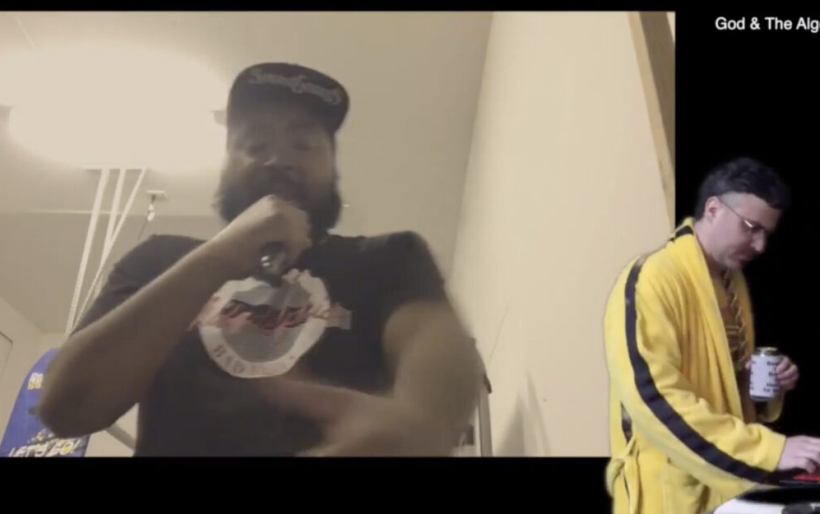 Reef the Lost Cauze and DJ Caliph-Now | still from video

When Reef the Lost Cause raps “Don’t call it a comeback, I’ve been here for years” at the conclusion of “Back At It,” the hook hits him a bit differently. “It feels like I have been here for years, in this garage.” With Reef in the center of the screen, spitting bars from his Aunt Lindsay’s place in Sea Isle City, and DJ Caliph-Now in the foreground cutting up beats, this video — the Stay AT Home concert, released on May 1st — puts the Philly MC’s own spin on the livestream gig phenomenon.

At the top, he tells his viewers “Stay at home, curb the virus, do what’s right…OR YOU’LL DIE” with a menacing supervillian voice. He also gets self-depricating later on, acknowledging that “this is weird without people standing here with their arms folded, but it is what it is.” He’s sentimental, too, wishing his buddy and occasional collaborator Haj from Dumhi a happy birthday before going into “Squeeze,” a song Haj produced, and at the end heading inside the house for an incredible cameo from his son Manny.

The setlist features “God And the Algorithm,” “Back At It,” “The Majestic,” “Squeeze,” “Boxcutter,” “The Puzzle,” and Reef’s latest single, “Old Boy”; watch it below and dig further into Reef’s catalog over at Bandcamp.