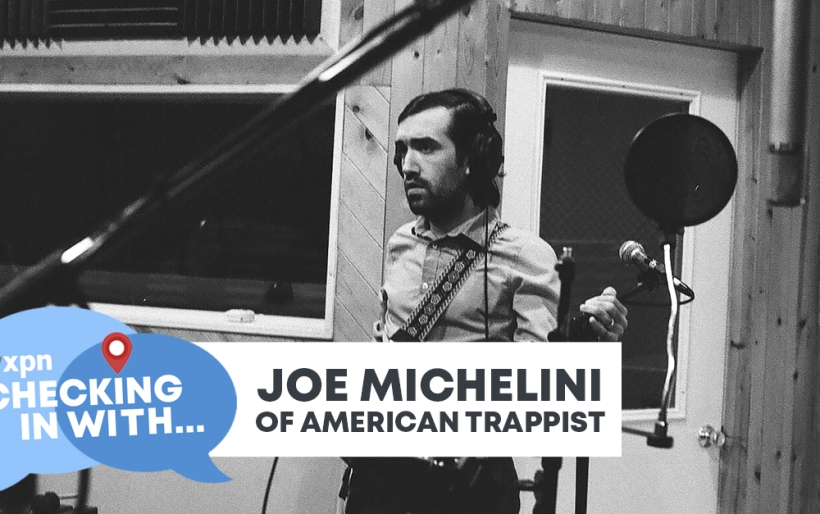 American Trappist | photo by Kara Donnelly | courtesy of the artist

Checking In With… Joe Michelini of American Trappist

In times of crisis, it’s more important than ever to check in on your friends and loved ones. Here at XPN, we’re Checking In With our extended musical family to see how they’re holding up during the Coronavirus quarantine…and what music has kept them grounded. Today, John Vettese chats with Joe Michelini of American Trappist.

“There are times at home when you start getting wrapped up in your own head about how crazy this is and how it’s impacting your whole year,” says Joe Michelini, the singer-guitarist and songwriter of American Trappist. “And it only takes a moment to realize that everyone’s going through the same thing or worse.”

Reflecting on the Coronavirus pandemic with a mix of nervous worry and levelheaded perspective during our Checking In chat, Michelini notes that our collective uncertainty right now is oddly comforting. He’s hopeful the we’re-all-in-this-together outlook of the present moment yields something positive on the other end

“It’s hard. Hannah, my wife, and I run a recoding and animation studio in the suburbs, and our work has obviously been impacted,” he says. “It’s really hard to know what comes next. At the same time, because we’re small business owners, we’re generally working seven days a week, 24 hours a day, and we’re getting a mandatory break to breathe. That’s probably healthy.”

Joe told about those production sessions he’s still able to do at Berlin Studios, meeting with bands via Zoom to remotely work on projects and make post-quarantine plans. He also talks about his own new record The Gate, out Friday. It’s the first American Trappist album recorded live in the studio with Michelini’s longtime band of players: Shane Luckenbaugh on drums, Max Kulicke on guitar, and Lewie II on bass, with contributing producer Jackie Milestone.

“Bands come and go,” Michelini says. “I don’t know how long this band is going to be together. I just happened into it. But while we are together, this record is special because it represents this band, this group of people in particular playing these songs together, as opposed to me making the record on my own, or micromanaging or dictating parts, hiring musicians, or any combination of those things. This American Trappist record really belongs to the five primary people who made it. It feels like a photograph of a wild animal. There’s no way you can make the same moment happen again even if you tried.”

Grab a pre-order of The Gate here, listen to our Checking In chat with Joe Michelini in the player, and check out his musical picks down below — which includes a breathtaking song he produced for singer-songwriter Pat Parker.

Checking In With Joe Michelini of American Trappist

Favorite Song of All Time: “Grand Canyon” by Timber Timbre

“I got into Timber Timbre on their first record, I’ve always liked this band and their songs. ‘Grand Canyon’ is off a record called Hot Dreams, which is one of my favorite records of theirs. I had just got off tour with the band I used to be in, River City Extension. We were on our last national tour and about half way through the tour, you could just feel the band breaking up for a bunch of reasons. But we’d put so much time and effort into this record, and we had to tour on it. We were really proud of it, but everything around it besides the record was crumbling, everyone was feeling very emotional, and tense, and tired, exhausted by years of being in the band, and so on. We were in the southwest, we had a couple days off, and none of us had seen the Grand Canyon. So we drove overnight from the gig to watch the sun rise at the Grand Canyon. Everyone was grumpy and sweaty and whatever, but we’d decided to do it. When we Saw the Grand Canyon and the sunrise, I remember feeling like I got knocked in the chest, like I got the wind knocked out of me. I feel like it was a bit of a release for everyone, and a reminder of how small we are and how small what we’re doing is. We spent the whole day, the following day, apart, walking around the park and getting some much needed space. We got back in the van, got home from tour, the band inevitably broke up, and then this record came out, Hot Dreams. And I heard this song, and it really just felt like it encapsulated so much of that experience and what we were feeling at that time, and what we had walked away from. I guess we were all a little bit emotionally vulnerable but this song ended up having a big impact on me because of that.”

Song that Raises Your Spirits: “Circuital” by My Morning Jacket

“I love My Morning Jacket. I grew up without a lot of pop culture exposure, and without a lot of exposure to rock music. I always end up finding a funny way there, and My Morning Jacket was one of the first real big rock bands I was exposed to, around 18 or so. And I fell in love with them, for good reasons I think. They’re a wonderful band, they’re weirder than they’ve ever gotten credit for, and they do such a great job live and in the studio. Circuital is a great record, it’s massive feeling but it’s also soft, and it really inspired a lot of what I would do after that.”

Song You’re Most Proud of Working On: “High” by Pat Parker

“Pat was introduced to me through a mutual friend. You never really know what to expect, but Pat’s a really sweet and interesting guy. He works in the healthcare industry in Philly, and he is an encyclopedia of the history of soul music and jazz in Philadelphia, of which there is a super rich history. Pat’s just kind of knows all of it, which is really interesting. This was his first time going into the studio to make a record, and when I heard his songs, when I heard his voice, I was like ‘woah!’ I think about this a lot, and I think for someone like Pat, who is not involved in the music scene, who is not going out to shows, at least not the shows that you and I are at, but has this extensive knowledge of the history of all these clubs and recording studios and artists who have come out of Philly, I think there’s some sort of healthy detachment. I’d love to see Pat involved in the local music scene and be known, and be meeting with other artists, and be a part of that community, but he didn’t have any expectations for it. He came in with a respect for the history of music in Philly, and a real love for it, and I think whoever somebody approaches anything like this, whether it’s making music or writing, there’s a difference. You forget, there’s a real palatable difference between people who are trying to climb the ladder and having a miserable time doing it, and people who are doing it because they love it and because they respect it and because they want to make a contribution. Pat checked all those boxes. He’s so humble, so talented, he has such an incredible, unique voice, and I think this song came out beautifully.”