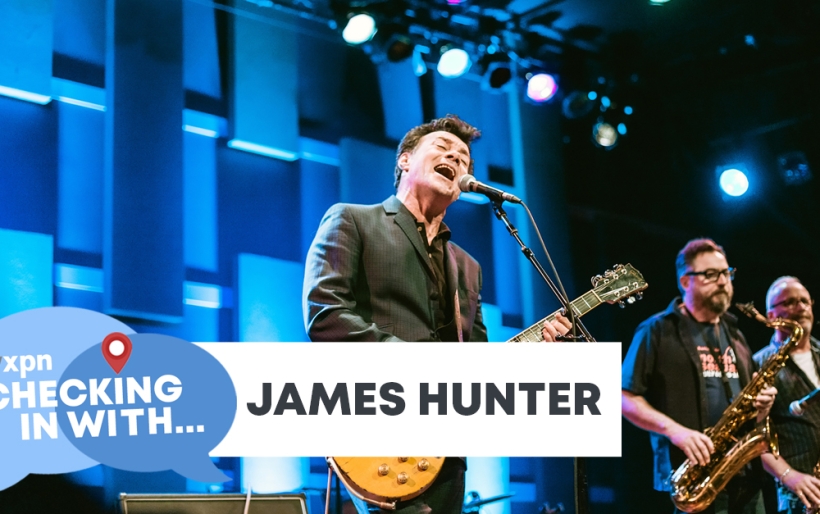 Checking In With… James Hunter

In times of crisis, it’s more important than ever to check in on your friends and loved ones. Here at XPN, we’re Checking In With our extended musical family to see how they’re holding up during the Coronavirus quarantine…and what music has kept them grounded. Today, Dan Reed chats with James Hunter.

For the past two month, British singer-songwriter James Hunter has been staying in Tom’s River, New Jerse, with his wife and parents in law. “We came here just before the virus and the lockdown kicked in, thinking there was a possibility that tour might still be going ahead,” he tells us during our Checking In chat. “So we came over. And we decided the safest bet is to hang tight until things calm down a bit.”

Our conversation touches on his new album Nick Of Time, keeping in contact with bandmates online, what he looks for in backing musicians, and some of his favorite lesser-heard gems in music. Hear it all in the player below.

Checking In With James Hunter

Favorite Song of All Time: “It Ain’t No Use” by Lou Johnson

“Lou Johnson is somebody I discovered through the miraculous medium of YouTube. I hadn’t heard of him before, and he sort of first recorded all those tracks that were made famous later by people like Dusty Springfield. All those sort of real Bacharach standards I think were recorded first by him. He just missed the boat, he didn’t get the hits he should have, he slipped through the cracks somehow. He’s one of the best singers, kind of like Jerry Butler and then some.”

Song that Raises Your Spirits: “L’Internationale” by Tony Babino

“I was a bit down after the last general election result. And a friend of mine cheered me up with this one, it’s an old worker’s anthem. They’d sing it at party meetings at the end, and my mate John Banes sent it to me to cheer me up, and it’s sort of a tongue-in-cheek version of this rather stirring workers’ anthem.”

Song You’re Most Proud of Working On: “This Is Where We Came In” by James Hunter Six

“It was the most perfectly realized of all the ones we recorded. It was the execution, and the theme of it…for older cinema goers it’s sort of a familiar phrase. I think younger people won’t get that because when you go to the cinema, you get turfed out as soon as the picture ends. But in the old days, you could come in halfway through a film and then watch it through again, and then exit when you came to the bit where you originally entered. So I used that phrase as an analogy for a relationship that’s on its last legs.”