Checking In With... Ani DiFranco - WXPN | Vinyl At Heart 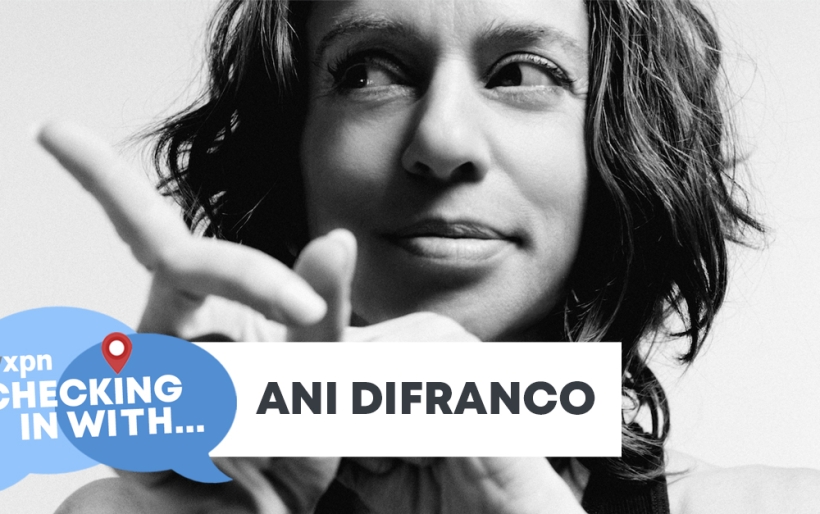 Ani DiFranco | photo by GMD Three | courtesy of the artist

Checking In With… Ani DiFranco

In times of crisis, it’s more important than ever to check in on your friends and loved ones. Here at XPN, we’re Checking In With our extended musical family to see how they’re holding up during the Coronavirus quarantine…and what music has kept them grounded. Today, Dan Reed chats with Ani DiFranco.

When we got Ani Di Franco on the phone from her New Orleans home for a Checking In chat, the first thing we learned was that her city was beginning to ease back to its pre-COVID state in a surprisingly fast way.

“A couple nights ago, the mayor announced a partial reopening, with restaurants at 25% capacity, et cetera,” DiFranco says. “So I rode out on my bike, I rode around, and it sure did immediately look different. There were open doors, people coming and going, the level of activity jumped right away.”

While she’s grateful for the amount of time that she’s gotten to spend with her family during quarantine — she wouldn’t be seeing her two children as often in a regular touring world — DiFranco has also been occupied with Righteous Babe Radio, a 24 / 7 webstream that she’s been working on “with my friends and comrades and musical associates” that features songs but also book excerpts, spoken word and poetry, daily news reads, and live bootlegs from over the years to “keep it nice and raw and real.”

We asked Ani if having such a fervent fan base is a boon in these tough time, and while she says she sees it playing differently for different artists in her friend circle, she loves the access that she still has. “Even just being a solo performer is a great thing in terms of musicians and how they’re impacted by the pandemic,” DiFranco says. “Theoretically I could turn on my phone camera and reach all those core fans.”

We talked about her 30+ year journey maintaining her artistic independence. We talked about Long Time Gone: The Prison Music Project, her new release on Righteous Babe Records, due out June 5th. And we talked about some of her favorite music of all time. Hear it all in the player below.

Checking In With Ani DiFranco

Favorite Song of All Time: “Journey in Satchidananda” by Alice Coltrane

“I love Alice Coltrane, and I spent lots of private time with her recordings taking them in deeply into my soul. That particular track has been my walkout music in my live performances for many years. So for me, when I hear that bass line start, my whole life flashes before my eyes. My life in music, my whole long journey…I get misty eyed!”

Song that Raises Your Spirits: “Backwards” by Princess Shaw

“Princess Shaw is an incredible person with an incredible documentary, Presenting Princess Shaw, that introduced her to the world, including me. The documentary hinges on three tracks that began as a cappella performances that Princess Shaw uploaded to YouTube, and Kutiman, this composer / performer in Tel Aviv takes her songs and produces them using only found sounds from YouTube. It’s musical collage production behind her a cappella offerings. And then the documentary shows you how this process plays out, and it’s very surprising and inspiring. And she’s a health care worker, she works at a nursing home in New Orleans. I interviewed her for Righteous Babe Radio about her life these days; it was very intense, and I got to revisit all the tracks forwards and backwards.”

Song You’re Most Proud of Working On: “Nowhere But Barstow And Prison” by Ani DiFranco and Spoon Jackson

“The prison music project is a record that’s been ten years in the making. The first five years, my friend Zoe Bookbinder spent going into New Folsom Prison doing songwriting workshops. She got a body of material, beautiful songs, raps, poems, from the men in prison. And she caame to me to produce its into a record, which took another five years. We had many collaborators, a lot of women singing these songs of incarcerated men and I find that juxtaposition interesting. Some recordings are the men themselves, singing over the telephone. And this will benefit the Southern Center for Human Rights arts in incarceration programs. We hope to speak to the humanity of the 2 million people in prison in the U.S. right now. To help us reexamine this situation of mass incarceration, especially now in this time of COVID-19. Spoon Jackson has been in prison for 40 years, and he has a life without parole sentence. So without intervention without the Governor of California, he has no hope of becoming parole-eligible, and he somehow stays hopeful, alive, connected. He released books of poetry from prions, he’s done podcasting, been involved in plays and helped teach courses on writing in prison for other prisoners, and for friends outside in academia. He’s a very connected person for his circumstances.”