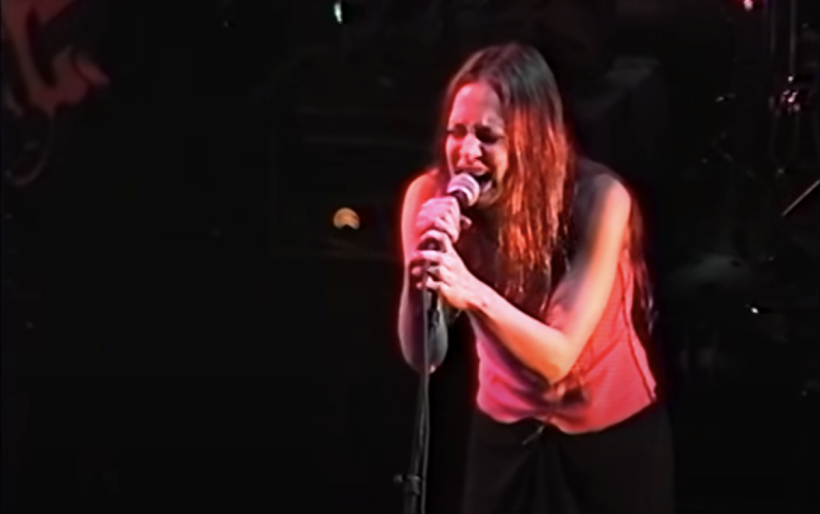 Watch Fiona Apple play all of When The Pawn, cover Bill Withers and more at The Tower Theater in 2000

If you’re like us, you’ve spent a decent bit of your COVID quarantine obsessing over Fiona Apple‘s brilliant new album Fetch The Bolt Cutters and dearly wish you could see the beloved post-alternative singer-songwriter perform. Today, we might have the next best thing for you.

Twenty years ago, on May 23rd of 2000, Fiona performed at the Tower Theater, and a video of the entire concert is on YouTube. It was her second time playing the Tower that spring in support of When The Pawn… She’d previously appeared at the Upper Darby venue in March, and seemed generally apologetic about it to this particular crowd, warning return attendees that the setlist was going to be exactly the same.

“I don’t know how to do that stuff where people come up and they play whatever they play,” she says. “I can’t prepare like that. So I’m sorry about that. This show’s going to be different in its own way, but I don’t have anything special.” On the contrary, and without having the March gig to compare it to, there’s nothing about this performance to apologize for.

We see a massive amount of energy exhibited by Fiona and her bandmates — Joe Simon on vibes, Jebin Bruni on keyboards, Keith Lowe on bass, Matt Chamberlain on drums, and Michael “Lucky” Lockwood on guitar. The entirety of Pawn is performed, along with a well-chosen handful of songs from her 1996 debut Tidal, and they pair off nicely, like the way a riveting “Limp” glides breathlessly into a dreamy “Sullen Girl.” A performance of “Sleep to Dream” at the show’s midway point is punchy and powerful.

Fiona’s between-song interaction is a treat as well. The way she presents her persona very much varies from tour to tour and show to show, and I’ve seen her aloof, explosive, and cryptic at various turns over the years. Here, she is warm and welcoming, seeming simply stoked to be there from the moment she greets the audience with a jovial “Konbanwa!”

“We were just in Japan, and so now I know how to say things for shows,” she explains. “I’m very unpracticed in talking English right now, as you can probably tell. If I say ‘Konbanwa,’ that means ‘good evening!’ If I say ‘Tanoshinde,’ that means ‘are you having a good time?'”

The gig reaches an emotional peak towards the end of the main set, when a sleek performance of Pawn‘s “A Mistake” crescendos in cathartic screams, Fiona howling the concluding “why, why, why,” and then twirling and leaping as the band plays out. The crowd erupts into applause, and folks in the front row begin passing a bevy of gifts forward. “What happened just now?” she laughs.

There’s still more in the tank, though, and after an encore break, Fiona and the band return for an encore of two covers: a downbeat and dreamy “Just One Of Those Things,” a Cole Porter song, and a rousing rendition of Bill Withers’ “Kissing My Love” that Fiona once again throws herself into completely. Incredible. Watch below.