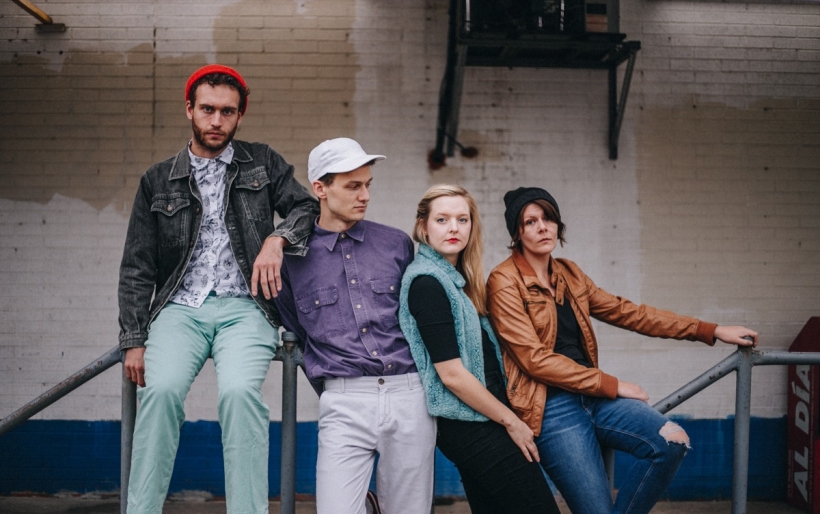 Little Splash, released on May 22 via IndieCorp LLC, is the group’s formal re-introduction. Formerly known as the Brooklyn-based band all boy / all girl, Grocer began their new life with a move to Philly and a March residency at Ortlieb’s. When the residency was cut short due to the COVID-19 pandemic, the band performed on Facebook from their South Philly basement, continuing to build momentum in advance of their debut.

Single releases “Infinite Commute” and “Blue Danube” already gave an indication into what Little Splash would provide, as much as any one song can. Every time Grocer dances too close to one particular genre classification, they quickly pivot towards another, incorporating influences from contemporary indie rock to art rock to post-punk, with a few additional bells and whistles in the form of voicemail messages that open, close, and punctuate the album.

The balance between Danielle Lovier’s ethereal warble and Nicholas Rahn’s haunting drones anchor the album, as every song plays to a specific vocalist’s strengths. Both voices are captivating in their own right, and layers of driving percussion, guitar, and bass elevates these vocal lines into a sound as addictive as it is indescribable. “I want to take off all my clothes / And run naked through the street,” Lovier proclaims with urgency on “Glitters,” a track as anthemic as it is anxious. “I am touching you now / Can you feel me?” she begs, instrumentation swelling behind her. Then, on the next track, “Everything Alright,” Rahn’s voice is languid as he insists that “Everything’s gonna be alright,” with drum beats and arpeggio lines attempting to push forward as Rahn pulls back, this conflict between singer and song forming the heart of the track.

Where Grocer succeeds is in tying these elements together in a natural, genuine manner. At no point does the latest jazzy guitar riff or droning background feel superfluous or pretentious. “Death in the U.S.,” for instance, would suffer in less adept hands, opening with drum hits before Lovier enters, singing “Bury me in a moving van / on the open road / with the rest of the band.” Plucky guitar licks and heavy reverb supplement Lovier’s agitated “Death in the U.S.A.!” shouts, but the final product becomes an authentic artistic vision, rather than quirk for quirk’s sake. It helps that, at eleven songs and thirty-eight minutes, every track is essential, and the album is unburdened by the prolonged navel gazing that tends to pervade contemporary experimental music.

Grocer’s record release show, originally scheduled for May 28 at Boot & Saddle, has since been rescheduled for September 28. In the meantime, the band is planning a rooftop concert for May 29 (or, in case of inclement weather, May 31) that will allow an audience to watch from a safe distance. This show will also be available by Instagram and Facebook live-stream. In the meantime, listen to Little Splash below.