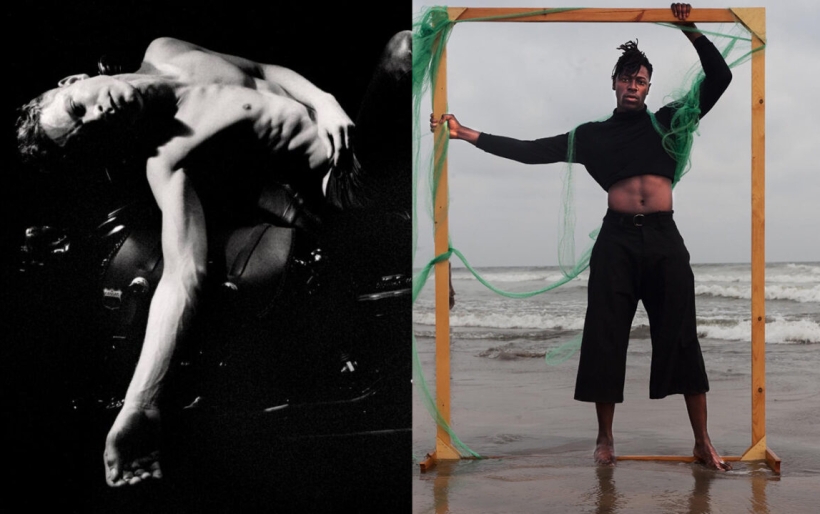 “Half of my whole life is gone,” Perfume Genius’ Mike Hadreas croons to open his latest album, Set My Heart On Fire Immediately. The first minute of album opener “Whole Life,” is deeply contemplative — morose, even — until twangy guitars enter, injecting the track with a sense of wonder. This immediately establishes the album as a deeply personal self–reflection of Hadreas’ queer identity.

Similarly, Moses Sumney’s latest work, græ, revolves around an examination of Sumney’s multitudinous identities. The album’s title is a reference to the infinite range of shades between black and white – even the usage of the ‘æ’ symbol is a cheeky reference to the project’s amorphous fluidity. On “boxes,” one of the album’s several interludes, Ayesha K. Faines muses “I truly believe the people who define you control you.” Throughout the entire album, Sumney aims to deconstruct and eliminate our need to label things that don’t need to be labelled. In a recent interview, Sumney pointed out that many media outlets bill him as a “queer musician.” He remarked, “I don’t correct people when they say that… at some point proclamations of identification are largely for other people, not for the self… It’s worth noting that no one has ever been considerate enough to ask me.”

Both albums are careful examinations of the need for self–identification, and both albums are defined by their subsequent lack of definition. Lyrically and sonically, both artists reject labels given to them by others. Sumney’s græ is somewhat more intentional about this rejection, while Hadreas’ Set My Heart… opts for a more contemplative approach.

The two artists’ rejection of labels across their respective work is clearly seen in the album’s production: Hadreas and Sumney employ instrumentation and arrangement techniques which not only resist genre classification, they seem to move past the concept of genre entirely.

The first two singles on græ, “Virile” and “Polly,” established this concept early on. Where “Virile” is explodes outward with immense bombast, “Polly” contracts inward with meditative guitar strums. Other cuts on the album similarly refuse definition: the instrumentation and arrangements throughout the 20–song project are dense and varied, in part due to the album’s 40+ collaborations, including contributions from legendary electronic producer Onohtrix Point Never and funky bass legend Thundercat.

The collection of songs on Set My Heart… similarly escape immediate definition. Some cuts, like “Describe” and “Some Dream,” utilize heavy shoegaze textures, with dense walls of guitar. But even in those songs, lighter textures, twangy guitars, and harpsichord arpeggios provide a certain weightlessness. This immediately contrasts songs like “Jason,” and “Leave” which feature relatively sparse, unconventional instrumental arrangements. There are plenty of pop hooks across this album (“Nothing At All,” “Without You”), starkly contrasted by ethereal wonder of “Moonbend” and “Just a Touch.”

The vocal delivery across both albums similarly suggests a sort of fluidity, providing a commentary on the gender binary. Sumney’s characteristic falsetto, employed to great effect on his previous album, Aromanticism, is still present, but songs like “Gagarin,” “Virile,” “Polly,” and “Me in 20 Years,” showcase gorgeous singing in a much lower octave. Interlude “jill/jack,” featuring Jill Scott, directly commentates on the rejection of the gender binary. Mike Hadreas also employs his full vocal range. Hadreas sings “Jason,” a song about a gentle sexual encounter, entirely in falsetto, while “Whole Life” and “Leave” showcase him accessing a lower register. Fluidity between effeminacy and masculinity has always been a key theme of Perfume Genius’ work, and Set My Heart…is no exception.

There are many thematic and sonic parallels to draw between the two albums. And coincidentally, they were both released on May 15th. Despite this comparative review, it’s important to understand that these are two uniquely individual pieces of art, both incredible in their own right, and both fully deserving of individual attention and examination.