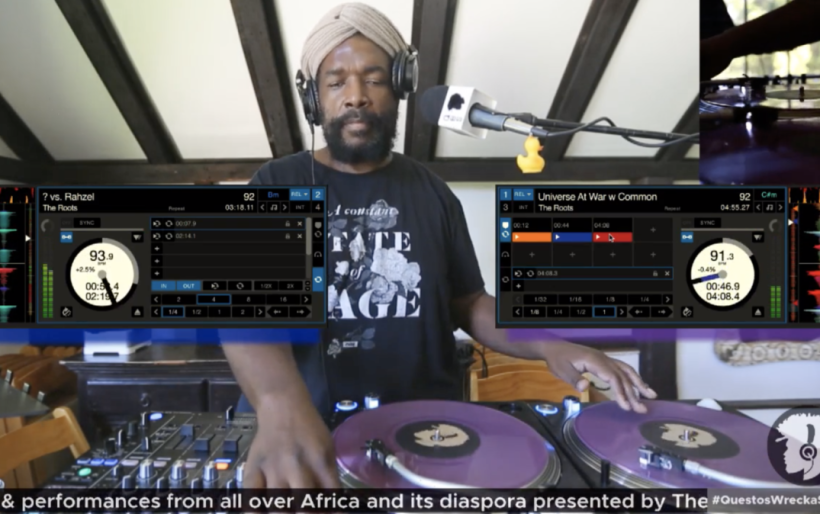 In celebration (or memorial?) of what would’ve been the 13th annual Roots Picnic, Questlove took to Twitch, Instagram, Youtube, Facebook and beyond on Saturday afternoon, to live-stream his first-ever all-Roots DJ set.

For the next 3 hours, Quest proceeded to put on a clinic. Playing a seemingly endless stream of Roots classics alongside demos and collaborations with everyone from Jill Scott to John Legend and Elvis Costello, Quest gave context to each song by telling stories and behind the scenes anecdotes about its origin. Here are a handful of the crazy gems and revelations dropped during Quest’s all-Roots live-stream.

The Roots once made a classical album with composer Laura Karpman

When The Roots first appeared in the 90s, they quickly became known for their unique brand of jazz-inflected hip-hop. Despite this, they’ve made a name for themselves as a band that is comfortable performing in almost any musical context ranging from rock to hardcore jazz, Afrobeat, and beyond. One of The Roots’ lesser-known genre-bending experiments is Ask Your Mama, the 2015 collaboration with renowned classical composer Laura Karpman. Dedicated to the life and legacy of the Poet Langston Hughes, Ask Your Mama finds Karpman and The Roots bridging the gap between classical and contemporary Black musical forms like soul, jazz, and the blues.

“My Mellow, My Man” and “Dat Skat” were written in Cassandra Wilson’s apartment in Harlem

With early Roots classics like “Swept Away” and “One Shine,” it’s clear that the band had a powerful creative rapport with veteran jazz vocalist Cassandra Wilson. On Saturday, Quest revealed that two more early Roots jams were actually written in Cassandra Wilson’s Harlem apartment. The lyrics to “My Mellow, My Man” and “Dat Skat” are perfect examples of Black Thought and Malik B’s chemistry and potency as a duo in the early part of The Roots’ career. With their elastic vocal deliveries and fusion of rapping and scatting, it’s no surprise that Black Thought and Malik wrote it while staying with Wilson, who is a true innovator of jazz vocalizing in her own right.

30 minutes before The Roots’ 2006 album Game Theory was set to be shipped to the factory for distribution, Questlove pleaded with Jay-Z to help him find Thom Yorke to clear a sample used on the album. The Roots’ dreamy, somber cut “Atonement” utilized a guitar loop and snippet of Yorke’s voice from Radiohead’s “You And Whose Army?” According to Quest, it took Jay all of four minutes to locate Yorke at the gym and get him to give his blessing for The Roots to use the sample.

Quest and Malik B tried to go to the Million Man March, their bus never came, but they ended up making “Clones”

On the morning of October 16th, 1995, under the direction of The Honorable Minister Louis Farrakhan, one million Black men descended upon Washington D.C. in a demonstration of outrage at systemic racism and intra-community solidarity. Two men that didn’t make the trip were Questlove and Malik B of The Roots. Waiting for hours outside of a barbershop, the bus scheduled to take them to D.C. never arrived. After heading back home, Questlove heard producer Kelo Saunders (of The Roots production crew Grand Negaz) working on a moody piano loop. After adding a subtle Quincy Jones sample and drums jacked from Philly psych-rock band Surprize, “Clones” became a potent posse cut with Black Thought, Malik B, Dice Raw, and Mars Co-op trading vicious bars.

With the song “? vs Rahzel” we’re hearing the first time Questlove and Rahzel met

A standout cut from Do You Want More?!!!??! “? vs. Rahzel finds the self-proclaimed Godfather of Noise using his voice to imitate everything from trumpet riffs, upright bass lines, and classic hip-hop samples like the “Well, clap your hands to what he’s doing…” refrain from Mountain’s “Long Red.”Throughout the song, Rahzel pulls from his deep bag of vocal tricks while Quest holds down the drumbeat. When The Roots’ late manager Rich Nichols brought the beatbox virtuoso by the studio to meet Questlove, they locked in immediately. Their chemistry told hold so quickly, the duo didn’t even get a chance to formally introduce themselves. During his Twitch stream, Quest pointed out that you can tell Rahzel didn’t know his name because on the song he refers to him as “Roots” and “the funky drummer” in lieu of actually saying his name.

Quest once cut a demo version of The Beastie Boys Rock And Roll Hall Of Fame Induction Performance.

When The Beastie Boys were set to be inducted into the Rock And Roll Hall Of Fame, Beastie super-fan, Questlove was asked to submit a demo of potential ideas for the Beasties tribute performance. Playing all of the instruments and mimicking the voices of Ad-Rock, Mike-D, and MCA (R.I.P.) himself, Quest’s demo is a bizarre but quirky and loving tribute to the hip-hop elder statesmen. Quest’s demo runs through a quickly-paced medley packed with charmingly lo-fi versions of Beastie classics like “No Sleep Til Brooklyn,” “So Whatcha Want,” “The New Style,” and “Sabotage.” It’s a pretty spot-on imitation that only a true super-fan could muster. You can hear that demo at the two hour 39 minute mark as you’re watching the full DJ set below.

Welp, notoriously known for not tooting his own horn. Ahmir does the impossible: plays his music for the first time ever in public. @theroots