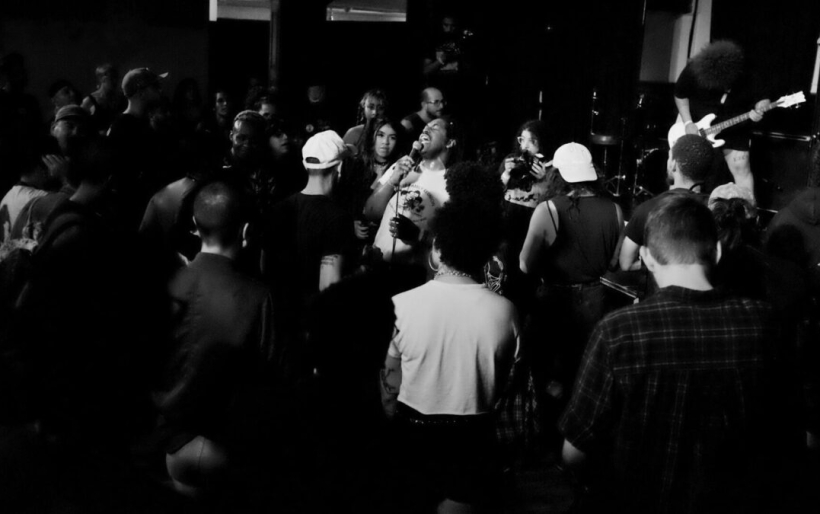 The Skeleton Key: Philly protest songs, Bandcamp suggestions, and a couple of ideas on what should replace a certain Center City statue

Hello Philadelphia. I hope that you are all safe and sound. It’s been strange enough continuing this column during a pandemic – not for lack of content, just cause I’m used to writing about shows and we haven’t had one of those in three months – but now that we’re in the middle of an uprising it feels even less important to talk about new releases or web streams or whatever. Still, as Albert Ayler famously proclaimed, music is the healing force of the universe. We need it now more than ever.

I want to start off this edition of the Skeleton Key by talking about some of the protest music that’s come out of Philly over the past few years. About a decade ago I was at an anti-police brutality demonstration that weaved through Center City behind a flatbed truck with a huge sound system on it that was BLARING a mix of hip hop – I remember a lot of Public Enemy – and punk stuff like Discharge and Doom and while I’m not saying every protest should be like that … well, that would be pretty cool.

While not every song is political, making music certainly can be, especially when it comes to communities who have been denied a voice or told that they can only create art in specific ways. Which is to say: even a love song can be threatening to the status quo.

When it comes to music from Philadelphia there’s a long history of mixing pop and politics going back to the TSOP days with tracks like “Wake Up Everybody” by Harold Melvin & the Blue Notes and “Am I Black Enough For You?” by Billy Paul. When punk broke in the late 70s Pure Hell was right there with “American” and a cover of “These Boots Are Made For Walking” that was pure aggression. Sun Ra and the Arkestra put out “Nuclear War” in 1982 and that’s just one of countless songs about the end of the world that characterized the Reagan presidency.

All my favorite Philly punk bands from that era were definitely making protest music, either overtly – a track from the YDI demo was called “Rizzo’s Coming Back” and had the snotty line “Rizzo’s coming back / I’m getting out / I’m getting out of Philly cause Rizzo’s coming back” – or in more subtle ways. For that you should check out some of the stuff from Bunnydrums, The Stickmen, McRad, More Fiends, and of course The Dead Milkmen.

The Goats released the absolutely charged Tricks of the Shade in ‘92, which despite coming out on a major label, tackled some incredibly revolutionary themes. Read more about them in this article we published last October about their Live at Khyber Pass album. That was also right around the same time The Roots really started taking off and let’s be real just about everything that group has ever done has been political. In 2010 they even put out a full album of covers with John Legend of classic protest songs called Wake Up!, which is awesome.

Even if Jill Scott hadn’t cut her teeth at Black Lily we’d still obviously be talking about both her and the pioneering series focused on women musicians that was held at the Five Spot from 2000 to 2005. Like a number of the musicians I’ve brought up, not everything Scott’s done has been implicitly political but the spirit definitely is. Check out “My Petition” from her second album, 2004’s Beautifully Human: Words and Sounds Vol. 2, for a great example of her ability to weave that in with her own personal stories.

That decade also brought us Witch Hunt and Rambo, two of the best anarcho-punk bands this city has ever seen. Also there’s no way I could talk about any of this without mentioning that “Thanks Bastards” by Mischief Brew – 2006, if you’re keeping score at home – has been echoing in my head every time I read the news.

These days it feels impossible to find a band that isn’t political, which is great. I don’t need to go into the details cause I’ve probably already mentioned them all in previous columns but if I was to make a list of modern Philly bands I’d like to hear blasting during a protest it would look a little like this:

Make it happen. If you need any inspiration, watch this clip of a recent demonstration in LA.

I know this is by far not a complete list of things so feel free to send me your favorite Philly protest songs. You can find my contact at the end of the column. Also please check out this fantastic podcast from my fellow WKDU DJ Al Knight that he put together as a musical tribute to everything that’s happened in the past week. It features tracks from Fela Kuti, Gil Scott-Heron, Kamasi Washington, Karen Bernod, and more.

Speaking of Moor Mother, not only did Camae drop a new album this week but she also announced that she is now part of the famed Sub Pop Singles Club, which is amazing. If you’re not familiar, this is something that goes back to 1988 and Nirvana when they were still an indie band. Some of the other bands that have appeared in this mail-order subscription-based series include L7, Poison Idea, Beat Happening, The Jesus and Mary Chain, White Stripes, Blues Control, and at least a million more.

Her new album, a collaboration with the composer and flautist Nicole Mitchell that was recorded live at the Le Guess Who? festival in Utrecht in 2018, is an incredible trip into a swirling mass of experimental psychedelic jazz.

You can pick up a copy of that and a bunch of other stuff during the Bandcamp sale today. While the sale – technically Bandcamp has waived their fee so musicians get 100 percent of the proceeds – was initially conceived to help people out during the pandemic, it’s partially morphed into a fundraiser with a lot of bands and labels pledging to donate some or all of what they make today to organizations connected to the protests.

Instead of going through a list of everyone who has made that pledge – Bandcamp has already put it together and it’s wonderfully long – I figured to focus on some of the new local releases. Let’s start with a couple compilations and go from there!

The first Folkadelphia Co-Mission compilation came out in April with contributions from Birdie Busch, Nick Millevoi, Mercy Bell, and a bunch more. The mix of rock n’ roll, folk, and more was put together by XPN’s Fred Knittel and it was just as fun as it was good. Volume two includes songs from Sadie Dupuis, Kath Bloom, and Driftwood Soldier.

Madalean Gauze has been absolutely kicking ass with these Fuel the Fight compilations. Not only are all the bands great but the money raised is going to both an essential worker fund as well as the Philly Community Bail Fund, both extremely necessary. The first volume included tracks from Coping Skills, Clap Your Hands Say Yeah, Witching, Joe Castro, Kuf Knotz & Christine Elise, Joe Jack Talcum, and a bunch more. The second comp is just as expansive, featuring Sheena & Thee Nosebleeds, Lily McKown, Laser Background, Data, and about thirty other bands.

The ever-changing Ominous Cloud Ensemble under the direction of artist Erik Ruin has released an album of improv recordings made at the Site/Sound Festival last summer. This lineup of the ensemble includes Julius Masri on electronics, the Arkestra’s Heru Shabaka-Ra on trumpet, violist Myles Donovan, violinist Veronica MJ, Anais Mavïel on vocals and n’goni, and harpist Jesse Sparhawk. The music they make together is heady and beautiful and it all feels especially necessary right now. This is also a benefit for the Philly Bail Fund.

It’s brand new stuff from King Britt, it’s benefiting the Louisville Bail Out Fund for the Breonna Taylor protests, and it’s coming out on the always awesome Black Catalogue label. What more do you need to know?!

Not only is two tone, roots reggae, and early ska just incredibly inspiring but it’s also really fun to listen to. Don’t get me wrong, I love angry music, but there’s something to be said for being able to get your point across while also playing a cool beat that makes people want to shake it and Catbite definitely understands that. Their mix of ska with some Elvis Costello-esque power pop really is perfect. Check out their new split 7” with Omnigone – members of Link 80! – that includes the very relevant cover of the anti-racist anthem “White Riot” by The Clash.

The bands will be donating their proceeds to the National Bail Out Fund, which is described as a “Black-led and Black-centered collective of abolitionist organizers, lawyers and activists building a community-based movement to support our folks and end systems of pretrial detention and ultimately mass incarceration.”

Guitarist Chris Forsyth has been doing a bang-up job uploading old and out-of-print songs to his Bandcamp. This month it’s four covers – Jack Rose, Captain Beefheart, Steve Wynn, and Neil Young – done by his Solar Motel band. As you can imagine all these songs are awesome. But really, you don’t need to imagine it because you can just go on Bandcamp, give them a listen, and buy the album and in turn support Black Lives Matter Philly, The People’s Paper Co-Op, and the bail fund. Do it!

On top of all these bands, there are a number of local labels who are donating all or part of what they make in sales. They include SRA Records, Get Better Records, Mace Canister Recordings, Don Giovanni, Estranged Communications, and Lame-O Records, which just released a real cool one by Dominic Angelella you should definitely check out. Also be sure to cross-reference my list with the one my colleague here at The Key John Vettese put together.

There are a couple events happening between now and the middle of the month that I wanted to highlight. The first is Jamaaladeen Tacuma’s Outsiders Improvised & Creative Music Festival on Thursday, the 11th. While the event had to be moved online due to the pandemic that doesn’t mean Tacuma hasn’t pulled out all the stops, as usual.

The evening will include performances from 24-7-Spyz, the absolutely legendary drummer Bernard Purdie – the creator of the Purdie Shuffle! – Ray Parker Jr., Kool & The Gang’s Ronald Khalis Bell, and of course Tacuma himself. There will also be spoken word and film segments. It’s going to be a blast.

The very next night it’s the June edition of The Monthly Fund with performers Camp Candle and Mỹ Tâm. That’s going to be a benefit for the Amistad Law Project, an prisoner advocate organization that’s based in West Philly.

Before I end this column I just wanted to talk a little bit about what to do with that newly discovered space across from City Hall. I’m no city planner so I figured to share a couple of concepts I saw online. The first comes from Jon Wurster, who incidentally plays on one of the best tracks released this week, “American Crisis” by Bob Mould:

The second idea is courtesy of Soul Glo:

Alright, that is it! I will see you all in a couple weeks. Stay safe out there. If you’d like to say hi, tell me your favorite protest songs, or share some city planning tips, hit me up on Twitter at @talkofthetizzy.