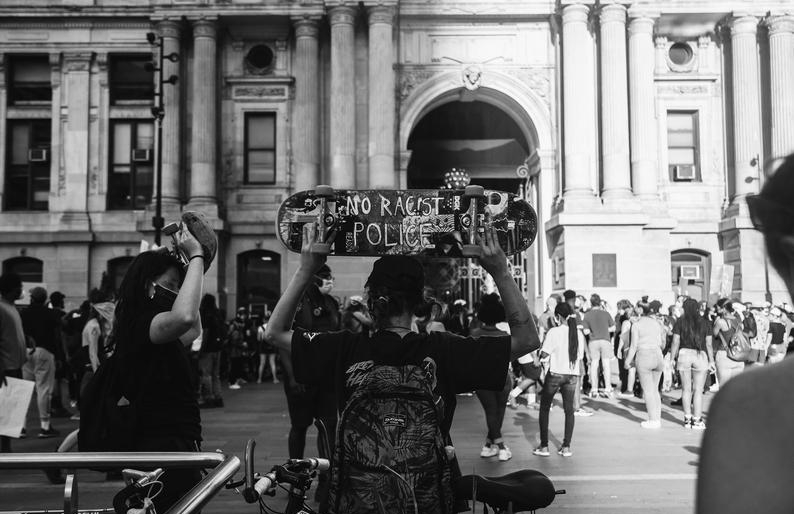 Amid Black Lives Matter protests, Philly musicians are raising their voices on a parallel issue: the city’s budget cuts

As protests spread around the country over the past two weeks, following the death of George Floyd at the hands of Minneapolis police, scores of musicians and artists have raised their voices in solidarity. Here in Philly, members of the music community are also speaking out on a separate, but related issue: the municipal budget.

Mayor Jim Kenney’s proposed budget for the 2021 increases spending on the Philadelphia police department, but decreases other city services, like libraries and cultural funding. Artists like The Districts, Amanda Blank, GrandeMarshall, Petal and more have spoken on social media through posts, petition shares, and retweets, asking City Council to reject any budget proposal that drastically cuts essential city programs in order to increase the police budget.

“What would the city look like if, instead, we invested those funds in temporary housing and drug counseling to help lift addicts out of poverty?,” wrote Slaughter Beach, Dog on Twitter. “Would that not drastically reduce the number of arrests made for burglary and possession? Would that not help build safer, more prosperous communities from the ground up?”

The cuts are not being made arbitrarily; Philly is facing a particularly difficult financial year ahead, with the Coronavirus pandemic causing a steep drop in the city’s revenue from wage taxes. In March, Mayor Kenney warned that the cuts would be “painful.”

The city’s current budget proposal involves laying off municipal staff — notably staff in temporary seasonal jobs, like parks and pools — trimming the Free Library Budget by 18%, and taking away $4 million in cultural funding, the latter of which impacts a handful of organizations. The Philadelphia Cultural Fund, which distributes grants to local arts groups, will not issue any grants in the 2021 fiscal year. The Office of Arts, Culture and the Creative Economy will permanently close this month, with some of its roles being absorbed by other departments. The Philadelphia Museum of Art and Mural Arts Program will lose about $500,000 in city funding each; the budget summary writes “These organizations have demonstrated outside fundraising capacity.” (A thorough breakdown of budget cuts can be found over at Billy Penn.)

“A city budget is a moral document – one that highlights the priorities of a city,” says Mannequin Pussy’s Marisa Dabice over email. The band has been one of the most vocal on social media about the budget cuts, and the band takes issue with Kenney’s priorities: a budget increase for the police “at the expense of gutting the budgets of nearly every other city service.”

Mannequin Pussy has used its Twitter to circulate a petition from the Amistad Law Project and encourage Philly followers to attend the June 9th budget hearing at City Hall, as well as e-mailing their Council Persons. Dabice says that Amistad Law, as well as other community advocacy groups like Reclaim Philly, and Philly Thrive have guided their thinking. Frances Quinlan of Hop Along has also been vocal on the matter, and calls the budget cuts “a grave step backwards.”

In an email, Quinlan says “It becomes clear that to have any hope for the future. we need to start acting and learning on a local level, uplifting our own communities and our youth, and working to serve and hear those whose stories have up to now been suppressed and disregarded, mainly those of black people.”

Along with $217 million for prisons, the city budget dedicates 20% of its expenses to law enforcement. As the Philadelphia Inquirerreports, this falls somewhere in the middle of other major municipalities in the country:

The Inquirer notes that part of the need for the increase is due to a scheduled pay raise in the police union contract, and quotes mayoral spokesperson Mike Dunn that the increase will also go to “to reduce gun violence and ‘advance reform’ within the department with such measures as anti-racism training and equipping more officers with body cameras.”

However, many of those speaking out see a disconnect between the money the city wants to spend on law enforcement, and the comparatively smaller amount of money the city does not want to spend on other services. As The Districts Tweeted to a follower, “The city wants to massively cut funds on important programs that can prevent crime and make communities better & safer (libraries, parks, mental health programs, arts ect.) but give 14 million $$ to further militarize the police that will only result in more violence & pain.”

The city is scheduled to have a budget hearing on Tuesday, June 9th; Quinlan has signed up to speak, and hopes she will get the opportunity to testify against the proposed budget cuts. “I have seen many posts from friends and colleagues in solidarity, and have witnessed generous patience and compassion from activists who’ve been on the ground for years,  and I am both humbled and inspired that there is still an opportunity for me to join and assist in the movement for Black Lives, in whatever way I can,” she says. “In this hearing, if I am allowed to speak, I mainly I want to address (in the 2 minutes I’ll have) the need for services that will uplift and assist our underserved youth. We should be investing in programs that help enrich and encourage kids throughout their education, instead of putting more police into schools. We need services intended to nurture and inspire now more than ever.”

Dabice sees speaking up as a matter of duty: “It’s a strange thing to be a touring musician, every night for months and months out of the year you say announce to people around the world ‘Hi, we’re from Philadelphia,'” she says. “But what does it mean to claim a city if you aren’t willing to put in the work for it? This is a time of action and we would hope that every Philadelphia musician is examining their own relationship to the city and heeds to call to fight for it.”

The budget hearing takes place on Tuesday, June 9th via Microsoft Teams, and City Council will hear public testimony beginning at 3 p.m. to 5 p.m. The public can watch the hearing in Philadelphia on Xfinity Channel 64, Fios Channel 40 or via the City Council Website. More information can be found here. Philadelphia residents can also write their council persons with concerns about the budget before June 25th; look up your council person here, and get their contact information here.