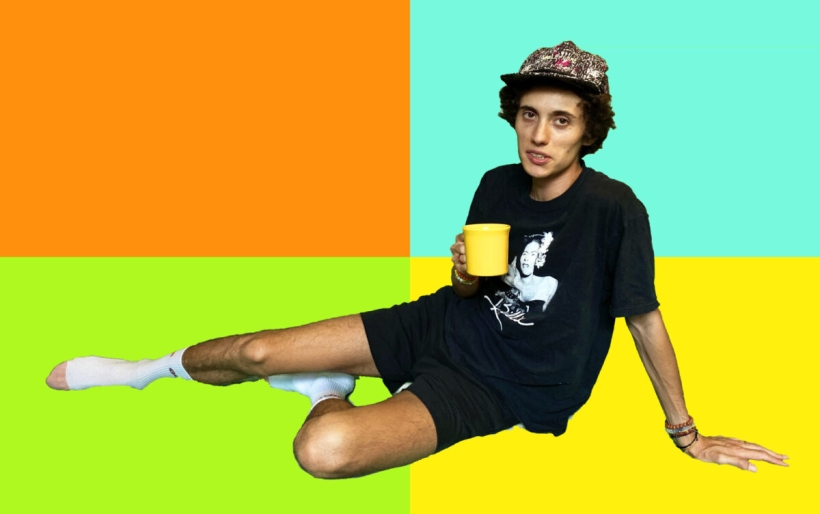 Over email, Gallo tells us he wrote and recorded the track during a three-month period of self-isolation last summer when immigration forced him back to America from Italy. He had planned to stay there with his now-wife, and collaborator, Chiara.

“It’s an affirmation for anyone feeling down on themself or inferior in a world that encourages it.  Originally written as a song for my partner – but it’s really universal and something I need to hear myself especially from time to time. I want people to get ready in the morning to this (even to go nowhere), cook to this, do small life things to this – it can be foreground or background music, and build people up,” Gallo says about the song.

Gallo also says he dedicates the to “anyone feeling beat down and inferior, especially those made to feel this way by an entire system.”

As for the YouTube video, Gallo says, “it’s me 3 months into quarantine, staring out the window reliving the last year in my head via a phone video dump of the last captured moments I have of the ‘old world.’ Scenes from my time in Italy with Chiara, recording, dealing with immigration issues, and ending with the Nashville tornado and protest aftermath.”

Ironically, Gallo finished recording the song in the same room he started in, due to COVID-19 self-isolation. The track was produced and mixed with the remote help of Ben H. Allen, a record producer known for his work with Gnarls Barkley and Animal Collective.

“Now and then feel oddly similar. No one knows where anything is going or anything in general.  I want to be one of the people at least trying to make others happy as the world goes through some major growing pains,” Gallo says.

Gallo describes making the track to be like the fashion term “color-blocking,” when one mashes multiple elements that may not traditionally go together. For Gallo, this meant mashing together all the stuff he likes and not limiting himself to anything in order to create his own idea of “pop” music. According to the statement, examples of elements Gallo “mashed” together include 90’s hip-hop beats, jazz chords, idiosyncratic guitar playing, as well as his singular perspective and lyricism.

“Making this new stuff felt like color-blocking, like if it was a shirt it would have a yellow left sleeve, orange right sleeve, green mid-section, pink pockets and a white-collar, no metaphor. Might not make sense, but that’s a shirt I want to wear right now.”

Gallo describes his colorful aesthetic displayed in the single’s sound from a period of self-embrace with “tastes, colors, joy, the ugly shit, growing up outside of Philly on 90’s hip-hop, top 40, candy, skateboarding and video games” at the forefront.

Gallo says that a full album should be out by the fall but a release date has yet to be announced. Aside from music, Gallo started REALLYNICE.world, a blog described to be  “a creative outlet that started as a place for him to just share thoughts and whatever he was into and has since morphed into a digital festival and a clothes line.”

Though it is a  “strange time to release music” to Gallo, he went through with the release because the song is just as much about the current day as it was when he wrote it. “I want to do whatever I can to balance out the heaviness and build the people up that need to be reminded of their power right now.”