Checking In With... Kilamanzego - WXPN 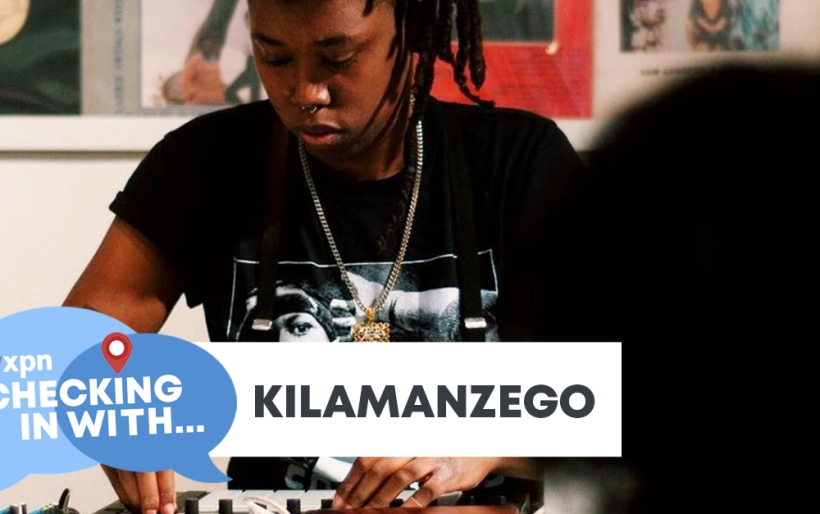 Kilamanzego | photo by Gillian Mapp | courtesy of the artist

In times of crisis, it’s more important than ever to check in on your friends and loved ones. Here at XPN, we’re Checking In With our extended musical family to see how they’re holding up during the Coronavirus quarantine…and what music has kept them grounded. Today, John Vettese chats with Kilamanzego.

Our Checking In series was conceived this spring as a way for us to see how some of our favorite artists were holding up during the public health crisis. Today’s installment is the first one we’ve recorded since another turbulent happening: national public unrest in response the death of George Floyd, who was killed last month by Minneapolis police.

When I caught up with Philadelphia musician, beatmaker, and producer Kilamanzego, she told me she was mostly doing well, but undeniably shocked. Not shocked by the issues of racism surrounding the protests — that’s something that Black people have been talking about for literally hundreds of years, and everybody else is finally beginning to listen. What shocked Kilamanzego was the local dimension of the protests, particularly its aftermath, with curfews imposed on Philly residents and loud, mysterious explosions overnight reminiscent of LRADs (Long Range Acoustic Devices). “It’s like military psycological warfare,” she said, noting that there have been many sleepless nights these past week and a half.

In the midst of all of this, Kilamanzego has been able to find some creative focus. She released a new track called “Black Weirdo” last week, her first piece of music written intra-COVID (and her first to feature her rapping). Tonight, she takes part in No Justice, No Beats, a collaborative project with three other Black producers from around the country. First, everyone pitched in their own isolated recordings to make a sample pack for the group, and then everybody had 24 hours to take those samples and flip them into their own new song.

Kilamanzego says she’s never made a beat in 24 hours before, but she was excited by the challenge, as well as the prospect of teaming up with the other three artists: Dallas beatmaker Caption, Los Angeles’ More Kismet, and Chicago’s Jovan Landry. It happens on the Bad Snacks Twitch channel at 8:30 p.m. ET tonight, and in addition to the musical component, the producers will be checking in with one another, chatting about current events, and encouraging viewers to donate to National Bail Out.

“This first one’s going to be sort of a test run,” says Kilamanzego. “But if it does well, we can do more as a series, and potentially invite bigger artists like producers from Brainfeeder and elsewhere.”

Listen to our full conversation with Kilamanzego below, and check out her Checking in musical picks.

Favorite Song of All Time: “Let’s Stay Together” by Al Green

“Al Green is just, you know…the melodies are really amazing in the song, he’s just very up front about how he feels in relationships, and the first time I heard it, it just really struck a chord with me.”

Song that Raises Your Spirits: “Killa Catz” by Kaytranada

“He’s a big inspiration of mine. There’s really no song of his that I dislike, and the song itself is very bouncy, it has trap mixed in, it has a great hip-hop feel. It gets you moving. Without him, I wouldn’t have started making beats.”

Song You’re Most Proud of Working On: “Black Weirdo” by Kilamanzego

“It’s a song that I started working on before the protests, while COVID was already happening, and I built the framework at that point. And then as the protests were popping off with BLM, I pretty much completed the song. It focuses on me and who I am. I’ve always been a weird kid, I grew up in the Bronx and didn’t really follow…there’s just like a style, or mannerisms that a lot of Black people had growing up when I was there, and I just kind of fell outside of that. It was a way for me to use my voice. It’s me rapping for the first time, and people were really digging the song, it did well on Bandcamp. I couldn’t have asked for a better response.”