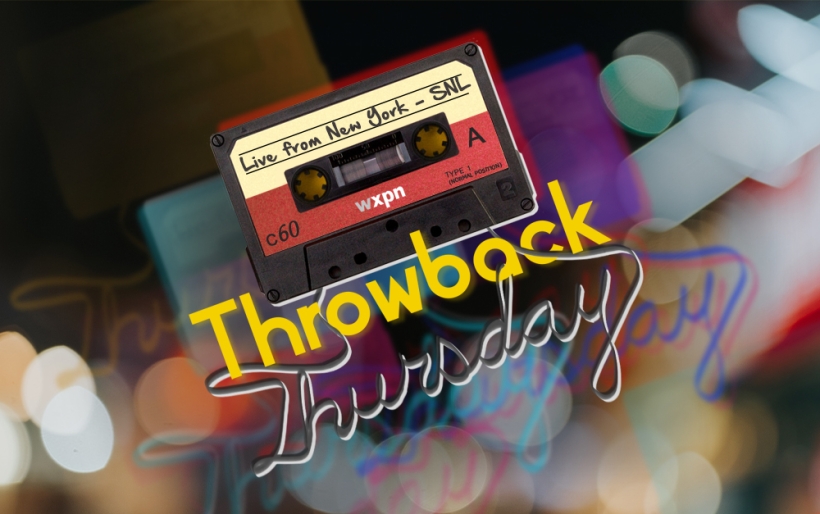 Though Saturday Night Live has been a comedy powerhouse since its premiere in October 1975, the show’s musical guests have always been a showcase for the rising artists of the time as well as musical veterans throughout the past 45 years. As we celebrate SNL on #TBTXPN today, here are some of the most memorable musical moments from the show.

Paul Simon was the second-ever host of Saturday Night Live on October 18, 1975. During this show, he and his old folk duo’s other half, Art Garfunkel reunited onstage after a split five years prior. The two returned to their acclaimed hits as Simon & Garfunkel including “The Boxer.”

1977: Paul Simon returns to duet with George Harrison, dress like a turkey

This would not be the last time Simon would be on the SNL stage. As of 2020, Simon has hosted the show four times and has been a musical guest nine times. After reuniting with Garfunkel in 1975, he would duet with another famous musician the following year when he next hosted the program. In November 1976, Simon would join former Beatle George Harrison on stage to jam out to The Beatles’ “Here Comes the Sun” and Simon & Garfunkel’s “Homeward Bound.” In a sketch from that same episode, Simon donned a turkey costume and sang a few bars from his song, “Still Crazy After All These Years” just to stop singing to complain about how the writers of the show made him wear the costume.

1977: Elvis Costello switches out “Less Than Zero” for “Radio, Radio”

In 1977, Elvis Costello’s debut was supposed to be perfectly arranged. His record label at the time planned for him to play “Less Than Zero,” a song about controversial British politician Oswald Mosley. On stage, Costello and his band performed a few bars of the approved song before launching into his rapid track, “Radio, Radio.” Because of this questionable performance, Costello wouldn’t return to the SNL stage until 1989.

1981: Fear and friends cause mayhem onstage

In the 1980s, SNL would try to bring more underground sounds to their show, like the time they invited the hardcore punk band Fear to perform during the Halloween show in 1981. According to a 2015 YouTube Interview from TheLipTV, Fear band member Lee Ving disclosed that ten to fifteen punk rockers from Washington D.C. were invited to New York to see the show. Instead, eighty punks would jump onto the stage during each song of the set and crowd surf as well. After the performance, Fear was banned from performing on SNL again.

1986: The Replacements are rowdy, drunk, and banned

Five years later, The Replacements would also be forever banned from the SNL stage with their drunken performance of “Bastards of Young” and “Kiss Me on the Bus.” During the second song, guitarist Bob Stinson mooned the audience.

In the 1990s, havoc would continue on SNL. In early 1992, Nirvana performed the infamous track “Smells Like Teen Spirit” and “Territorial Pissings.” At the end of their set, the band trashed their instruments, Kurt Cobain personally slamming his guitar into an amp.

Nirvana’s performance wouldn’t be the only memorable SNL performance in the 1990s. Irish singer-songwriter Sinéad O’Connor covered Bob Marley’s “War” and changed the lyric of “fight racial injustice” to “fight sexual abuse.” At the end of the song, she tells the audience to “fight the real enemy” right before she tears a photo of Pope John Paul II, protesting sexual abuse in Catholicism.

Elvis Costello’s earlier piece of SNL history would be parodied in 1999 when he interrupted the Beastie Boys’ performance of “Sabotage” and kicked off into “Radio, Radio” once again for SNL’s 25th-anniversary show.

2000: Radiohead takes Kid A to the SNL stage

The first year of the 21st century brought on a psychedelic performance from Radiohead as they performed  “The National Anthem” and“Idioteque” from their then-new album, Kid A. In addition to the seemingly endless amount of instruments used, the energy of the band was flowing, as lead singer Thom Yorke repeatedly banged his head when waiting for his cue in “The National Anthem.”

2002: The White Stripes turn up the volume

In 2002, Senator John McCain introduced the White Stripes. Their performance of “Dead Leaves and Dirty Ground” seemed to be the complete opposite of the conservative atmosphere of McCain’s introduction. Like rockers before them, the White Stripes brought more of a grungy sound with Jack White’s gritty guitar riffs and Meg White’s deep crashing drum work.

A supergroup of musicians took the SNL stage in May 2012. With Rolling Stones’ Mick Jagger at the forefront, Arcade Fire and the Strokes’ Nikolai Fraiture combined to perform a new take of the classic 1965 Stones’ tune, “The Last Time.”  This version had new additions to the sound to create a heavier track, such as an accordion.

2016: Kanye West enlists Chance the Rapper, Kelly Price, and a choir for a stunning a cappella of “Ultralight Beam”

If you search “Kanye West and SNL” on YouTube these days, you’re much more likely to get thousands of tabloid vlogs about his extemporaneous remarks in support of Donald Trump during the closing credits of a 2018 episode — the same show that he and Lil Pump performed while dressed as bottled water. A much better intersection of the Chicago rapper / singer / producer and SNL occurred a couple years earlier, when he appeared on the show in support of his record The Life of Pablo. Joined by gospel singer Kelly Price, wordsmith Chance the Rapper, and an uplifting choir, Kanye debuted one of the best songs in his catalog, “Ultralight Beam.”

Last April, a monumental milestone was reached as the first Korean pop group performed on SNL. Seven-member BTS performed two tracks, “Boy with Luv” and “Mic Drop” on the New York stage. While they are not the first Korean artist to be on the show since Psy made a cameo amidst “Gangnam Style” fame, they are the first with the “musical guest title.”

These performances are only a handful of iconic SNL performances, a show that continues to introduce new artists to audience members or provide a spotlight for musical masters.