10 cathartic videos to watch from the J.C. Dobbs noiserock scene of the 90s - WXPN 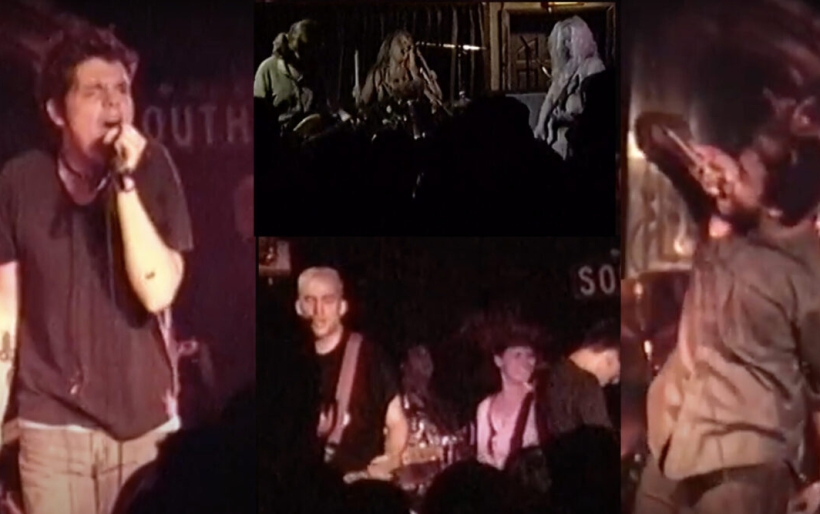 10 cathartic videos to watch from the J.C. Dobbs noiserock scene of the 90s

The world is a total wreck right now, and the machinations of the rock n roll underground probably seem like business as usual. The strange days of protest following yet more deaths of black citizens at the hands of the police and the still looming presence of corona virus and our subsequent reactions to it has seen the void and lack of live music grow wider. As we thumb through our well-worn Spotify playlists and groan at another ill-prepared, but ultimately well intended Facebook live performance by bands and performers we’d probably never pay to see, the void just seems to widen.

At the moment, we don’t know when we’ll be able to stuff ourselves into dusty halls, punk house basements, and seedy dive bars, watching bands rip the stage in rapturous frenzy. Still, the world needs more action now than ever before, and it’s easy to feel awful if you’re participating in something that can be viewed as indulgent. But rock n roll, music in general, has fueled many activists, revolutionaries and subversives. With that in mind, its also important to remember music history. Streaming sites on the internet have enabled us to live in many musical moments and this access is especially important for moments we might have missed.

For me, the part of the cure for the fatigue and ennui of the strange societal shifts has been listening to a healthy dose of mid-90’s noiserock and discovering Philadelphia’s place in that movement. J.C. Dobbs was a venue at 304 South Street in Philadelphia, PA that provided an interesting glimpse into the 90’s noiserock scene — a movement that sought to challenge the rising jock mentality of hardcore, the stale and static passivity of college and indie rock, and the punk rock orthodoxy that birthed it.

Featuring such stalwarts as Jesus Lizard and Guzzard, on labels like Touch and Go and Amphetamine Reptile, as well as smaller labels like Trance Syndicate and Skin Graft, the genre of noiserock married punk and hardcore’s immediacy with the artistry of no wave and the jagged, throttling rhythm section of post-punk bands like Wire and Killing Joke. The songs and ideas of noiserock bands were often presented as cinematic pieces. Singers / screamers would portray different characters from song to song, in rangy and wild topical landscapes. And JC Dobbs, a tiny borderline dive bar on South Street, was right there in the 1990’s to capture some of the era’s best performance.

And thanks to the camerawork and uploading abilities of YouTube user “markit aneight”, aka Joe Burns, and others, we can witness some of the more magical moments. Videos show legendary 90’s era bands like Rage Against the Machine, Oasis, and Nirvana before they emerged as international powers, still playing skeletal versions of songs that grungey Doc Marten attired teens would be singing in their sleep.

“I recorded these shows, [using] Sony TR5 and Sony TR71 8mm home video camcorders,” Burns says via e-mail. “There were also a few other people filming shows there around that time (90’s) and through the years. Nobody at the venue gave a shit. Most bands didn’t give a shit either.” When asked about the eclectic nature of his videos and the space (his account features everything from Voivod to Madonna) Burns says, “I guess I was involved in the ‘scene’ by going to a lot of the shows. I personally didn’t identify [with] one scene or style of music…I think a lot of people didn’t. That’s why the underground ‘scene’ in Philly was always so diverse and pretty fun. The bills a lot of the times back then were so diverse as well. So the scene was made up of everything.”

The videos are fantastic, grainy little capsules of a moment in time, when indie-rock was angrier, weirder, and noisier. It’s the kind of noise we need right now. Here are the ten best videos of 90’s noiserock bands that played at JC Dobbs that you can watch on YouTube right now.

OK, this one is cheating, it wasn’t at JC Dobbs, but instead another lovable divey rock club: the legendary Khyber. But this band was absolutely essential in the 90’ as a huge inspiration for the transformative feminist punk movement riot grrl, and total metallic noise-rock shredders.

Swirling melody, entrancing vocals, and weird songs about sailors. This DC area Dischord label band played with genre and gender in a fun way, but kept the noise intact.

A little more on the theatrical side, this band was like an angry country, baroque 50’s carnival act. Sometimes pushing pop-punk to its noisiest degree, other times just over-the-top punk rock fun.

I really only knew this band from their infectious track “If You See Kay” (23:44 into the vid), but I’ve found myself putting them on more and more Spotify mixes over the years. Wall of sound indie-punk with that 90’s slacker vibe.

Similar to Poster Children in sound, yet these guys were on Touch and Go and played with weird, steel and metal guitars that gave their band its wiry, discordant sound.

Well, duh, obviously this band makes the list. Can you imagine having been there, to see the band that would change music forever workshopping songs like “Teen Spirit” and “About a Boy” to rabid pre-grunge punks? Well, here it is.

A surprise entry, perhaps, because Tool aren’t exactly a noise-band, but their music is heavy, dramatic, and definitely a part of the lexicon of bands modern noiserockers call on as an influence. Plus, this video just fucking sweats.

One of the most underrated bands in punk rock history, Circus Lupus raged with serpentine, simmering angst. Led by enigmatic screamer Chris Thomson, the band played a disorienting brand of punk rock that sounded like the Rolling Stones getting beat up at their practice space by the Circle Jerks in the middle of doing a Joy Division cover. This is the purest sound of noiserock, played by one of the genre’s best bands, captured here in a glorious moment.