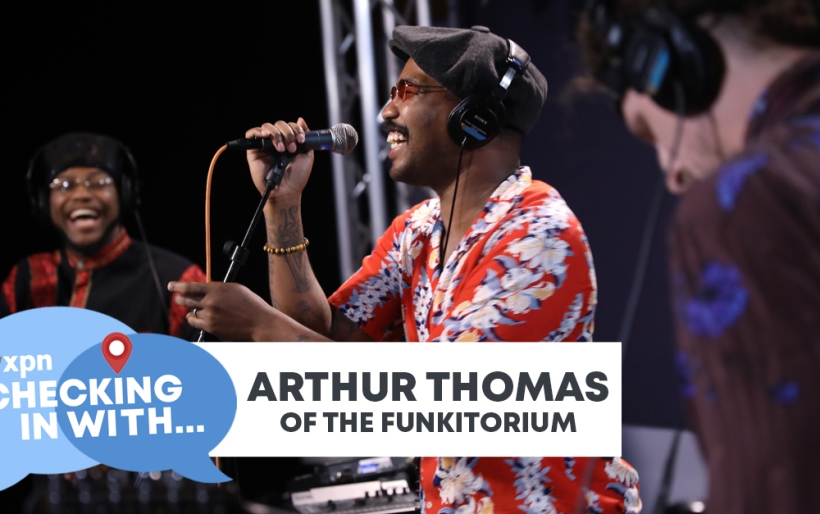 Arthur Thomas and the Funkitorium | photo by John Vettese for WXPN

Checking In With… Arthur Thomas of The Funkitorium

In times of crisis, it’s more important than ever to check in on your friends and loved ones. Here at XPN, we’re Checking In With our extended musical family to see how they’re holding up during the Coronavirus quarantine…and what music has kept them grounded. Today, Rahman Wortman chats with Arthur Thomas of Arthur Thomas and the Funkitorium.

“2020 came in at a whirlwind,” says Arthur Thomas. The Philly funk singer told us how he and his band The Funkitorium started it out with a World Cafe Live show paying tribute to Parliament / Funkadelic. Then he got the flu, and was down for three weeks. He lost family members this spring, and then things picked up with COVID. “At this point, I just expect drastic change, and mentally I’m just like ‘let me focus on who I am, and what I want to be in the future,’ and that’s been keeping me grounded.”

In our conversation for Checking In, Arthur Thomas talked about celebrating Ramadan during quarantine. He says it’s wonderful because it’s a time of peace, tranquility, and unity amongst Islamic community. “But because mosques were closed, I got to be leader in my household, in my family,” he says. “Without leaning on the knowledge of other brothers, I had to seek it for myself. It helped my focus, helped build my inner spiritual side.”

We talked about working on a new record with the team at Spring Garden Records, and what fans who have seen the band’s incredible live show can expect. Arthur also told us about using quarantine to find new sources of inspiration for songs — experience the everyday things in life like restoring classic cars with his brother (they fix up old school Monte Carlos in West Philly, as you see in their “How You Like Me Now” video), and going fishing every weekend, even waiting in line for groceries. “Living life is the best thing to do creatively as an artist,” he says.

Check out his Checking In song picks and listen to our full conversation down below, and get a taste of the new Funkitorium single “Fried Chicken” at the end.

Checking In With Arthur Thomas

Favorite Song of All Time: “Summer Breeze” by The Isley Brothers

“I haven’t met anybody in this world who doesn’t like that song.”

“It’s actually a song I sing to my daughter, and when she hears it, we got kind of a daughter-daddy dance we do together. Even though he’s not talk about his daughter, it’s a song that makes me happy, and she likes it too. It’s an amazing song, it’s like a swing song.”

Song You’re Most Proud of Working On: “Fried Chicken” by Arthur Thomas and the Funkitorium

“It’s kind of a double entendre song. It has elements where you think it’s a normal funky song, and you’re just talking about fried chicken. But on the backside, it’s taking about truly bringing the black community together. Which I feel strongly about. Coming up in a household where I had both my parents, I had a lot of friends who didn’t have both their parents, and I know that a lot of people who haven’t really tapped into the African American community, they don’t really know why certain things are the way they are. So I gave it a fun way of how I explain the way I view the way to rebuild the community in the future. It comes off as playful, but it’s very pro-African American, very uplifting to our community.

“The way we wrote this song is we were rehearsing for the Funkadelic show, and before very rehearsing we’d do this thing where Just and Nate and Chops would come up with a groove while warming up. We let them go, they were doing their thing, and me an Re-Mus hop on mics before rehearsal, warming up our vocals, and we came up with “Fried Chicken.” First I was a little bit nervous because I was like, ‘I don’t want the lyrics to scare people off.’ But then it’s like, people kind of need this, people need to understand who we are as a person. If you truly love us and like us the way you say you do, understanding us is key.

“And the way this song came out, I didn’t expect it to be as good as it is, and to have people [respond] …We recorded it at CCP, there was a class going on as we were recording the song in the studio, and to see the students say ‘wow that’s crazy,’ that lets me know, ‘okay, I did it.’ I’m proud of how the whole process came out.”