Checking In With... Joe Reinhart and Kyle Pulley of Headroom Studio - WXPN 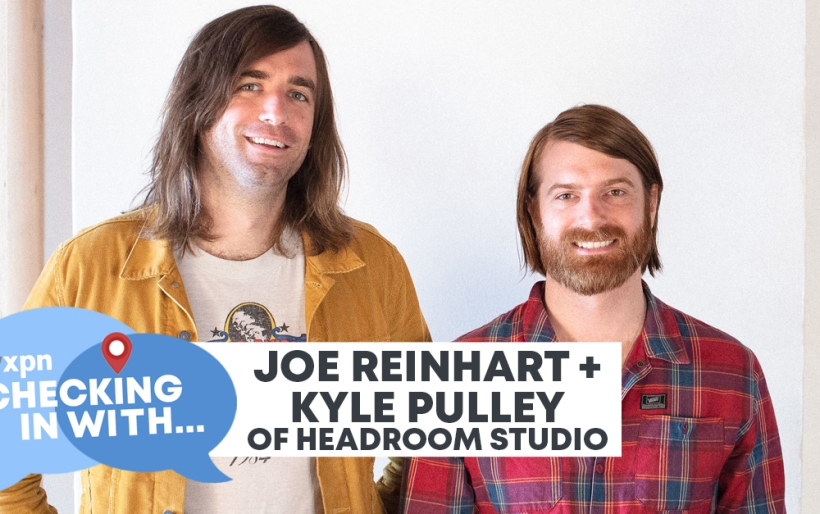 Checking In With… Joe Reinhart and Kyle Pulley of Headroom Studio

In times of crisis, it’s more important than ever to check in on your friends and loved ones. Here at XPN, we’re Checking In With our extended musical family to see how they’re holding up during the Coronavirus quarantine…and what music has kept them grounded. Today, Rachel Del Sordo chats with Joe Reinhart and Kyle Pulley of Headroom Studio.

As we’ve learned throughout this Checking In series, the COVID-19 pandemic has hit the musician community hard — and that extends for musicians who make their living running a recording studio, as Joe Reinhart of Hop Along and Kyle Pulley of Thin Lips do. They’re owners and operators of Fishtown’s Headroom Studio, which is slowly easing its way back into action following the Coronavirus shutdown.

When we talked to them for Checking In, Pulley and Reinhart acknowledged the stress and uncertainty of this moment, but kept a positive outlook as well. “Some days it’s like ‘this is so awesome, I have so much time,'” says Pulley. “Other days I’m like, ‘the world is ending, I’m really sad.'”

“This forced nothingness was kind of welcome, since I tend to go pretty hard all the time,” adds Reinhart.

COVID definitely changed Headroom’s ability to make records; as Kyle tells it, they went from a full calendar to a completely empty one in a matter of days this spring. But he says they’ve been able to do remote session work and mixing work during lockdown, and have begun allowing small groups of musicians in to record after Governor Wolf allowed businesses to reopen this spring, all while seeing to the little things like sanitizing surfaces and keeping air purifiers running.

Reinhart adds that they’re “limiting the amount of people we have in, like significant others and photographers. While those things are important, they are perhaps not essential to the creative process.”

The studio has also been promoting a charity raffle raffle for limited edition colored vinyl releases and test pressings from Reinhart’s old band Algernon Cadwallader, one of the first artists to ever record at Headroom.

“Why do I have ten copies of each Algernon record?” Reinhart says. “While they don’t mean a whole lot to me, other than the product itself, I think I knew one day there’d be opportunity to sell them. People would send me links like ‘hey, I saw your record for $300 on eBay.’ That’s crazy.” But, he says, “The opportunity felt like now to be able to give back a little to the Black Lives Matter movement and raise money. It’s been working so far.”

Find out more about the raffle here; below, listen to our conversation, which also includes some of Pulley and Reinhart’s favorite songs of all time.

Checking In With Joe Reinhart and Kyle Pulley of Headroom Studio

Favorite Songs of All Time: “1979’” by Smashing Pumpkins and “Everybody’s Got Something To Hide (Except For Me And My Monkey)” by The Beatles

Kyle: “What band have I always loved, and loved the longest? Even though he’s turning into kind of a kooky edgelord crazy guy, I think my all-time favorite band that I’ve loved the longest is Smashing Pumpkins. I think ‘1979’ [is my favorite song of theirs]. I love that the drums stay the same the whole time. I think it’s awesome, it took me forever to realize that. It’s a classic song.”

Joe: “When I was younger, and started to notice how things appealed to me sonically, I noticed that like Pinkerton sounded different and underground punk had a sound…in like 6th or 7th grade when I noticed ‘Hey, this doesn’t sound like everything else. I wonder why!’ There was something about ‘Everybody’s Got Something To Hide (Except For Me And My Monkey)’ — The Beatles’ song on The White Album, I still have my mom’s copy of that with her maiden name written on the cover — something about the way the guitars rip through and it’s very upbeating. John wrote it, there’s some quotes that the Maharishi used to say a lot, like ‘Come on, it’s a joy,’ things like that. But it’s mostly a feeling, it’s about how he and Yoko really didn’t give a shit what anybody else thought.”

Song that Raise Your Spirits: “Prom” by SZA and “Heartstrings” Oscar Peterson Trio with Milt Jackson

Kyle: “I think it’s actually a breakup song. I’m usually pretty good with lyrics, knowing what songs are about, but her lyrics are pretty stream-of-consciousness. The melodies and production, it’s more upbeat, it’s such a bright-sounding song, and the melodies are uplifting-sounding in a way. I get it stuck in my head all the time. I would love to write a song like that. It always puts me in a good mood.”

Joe: “I know you said not to pick a whole album…but I went ahead and picked a whole album. I picked Very Tall. It’s Milt Jackson with Oscar Peterson, and I forget who the drummer is. Something about that era of bebop is…you know, there’s no lyrics, so just the way it sounds and the mood is extremely relaxing to me. So if I’m tense or feeling grumpy about something or all worked up, it’s very much like taking a hit of CBD. You feel your shoulders go down a bit and it sweeps over you like a cool wave. I find it very therapeutic.”

Songs You’re Most Proud of Working On: “On My Own” by Shamir and “Somewhere A Judge” by Hop Along

Kyle: “It was really fun to work on. I got to collaborate with one of our assistants, Danny Marillo, who played drums. We blended his drum performance and looped it. I got to do a lot of programming, which I don’t always get to do, and I got to play bass on it, and that’s always fun. It’s a little bit of a different song than I sometimes get to work on, and Shamir is a super talented very gracious artist to work with and a pleasure to have, and I think we’re both very grateful for how it’s been received.”

Joe: “For me as someone who sees a lot of what a song is from the demo to watching a band live, whether it’s something I play on or just produce every step of the way, that’s a song went through a bazillion transformations. We recorded a version that was ready to get released, it was going to be for a movie project, we were all very happy with it. And then we kept working on it and reworking on it and I think one of the last few practices before it was time to record, I was like ‘this chorus is just not thrilling everybody, what if we made the bridge the chorus?’ And we did that, and Tyler came up with this groove that Mark latched on to right away, and it just felt really good. Recording it a lot of magical things happened, I was really happy with the autotune idea. And still playing it live, it;’s very challenging to sing and play it, and every time we’re done that song live, I just breathe out. ‘Ahhh, I made it.’ Or ‘no, I didn’t make it.’ Either way it keeps me on my toes, and that’s what I appreciate about it.”