Checking In With... Jake Ewald of Slaughter Beach, Dog - WXPN 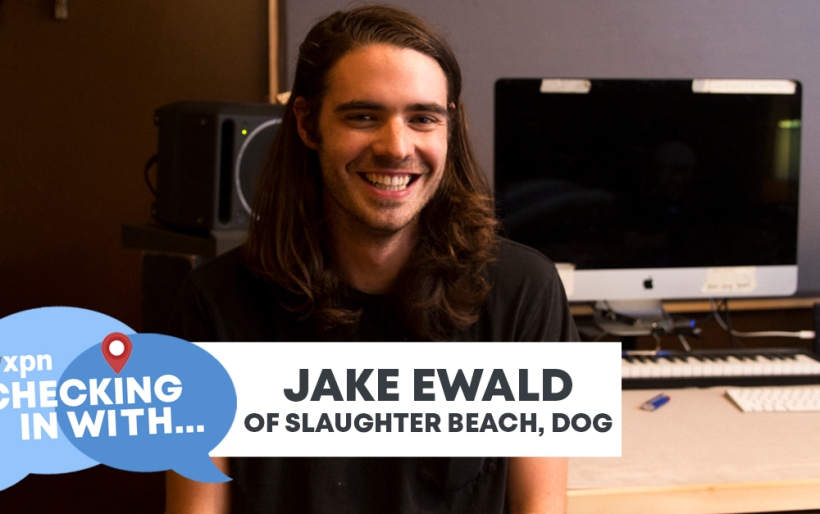 Checking In With… Jake Ewald of Slaughter Beach, Dog

In times of crisis, it’s more important than ever to check in on your friends and loved ones. Here at XPN, we’re Checking In With our extended musical family to see how they’re holding up during the Coronavirus quarantine…and what music has kept them grounded. Today, Rachel Del Sordo chats with Jake Ewald of Slaughter Beach, Dog.

We’re just past three months of the COVID-19 quarantine, and at times the year can seem like a turbulent blur. Jake Ewald of Slaughter Beach, Dog has a remarkably good memory of the activities that have kept him grounded since March.

“In the beginning I was practicing a lot of guitar,” Jake said during our Checking In chat. “After that I was doing a lot of drawing. It’s a constant stream of diving into one thing, getting really sick of it, and doing something else. More recently I’ve been trying to process all of the insane insanity going on with the police, and the protests.”

As a way of giving back in the wake of the protests, Slaughter Beach, Dog released a new song, “Fair Shot,” with proceeds from sales going to racial justice organizations. Ewald says it was written during the sessions for the band’s last album, Safe and Also No Fear, and recorded right before George Floyd was killed. He held off on the release initially, but after a couple weeks felt like it would be appropriate to put out as a benefit. “Especially with all the stuff Bandcamp has been doing with the multiple fundraiser days, that’s made it so great, not just for artists, but for fundraising too,” Ewald says, initially intending money to go to the Philadelphia Bail Fund.

“And when I went to donate it, it turns out the Philly Bail Fund was funded,” Ewald says. “So I just donated to Black Lives Matter, and there’s still some purchases every week, and I’m going to keep it going as long as it goes.”

We also talked about Ewald’s current book recommendations — he’s been doing a lot of reading during quarantine — we heard about how post-it notes play into his creative process, and we got to hear some of his favorite songs of all time. Listen below.

Checking In WIth Jake Ewald of Slaughter Beach, Dog

Favorite Song of All Time: “Shelter From The Storm” by Bob Dylan

“When I think about it, I think of it as a corny old song. But when I listen to it, it’s totally not corny, and it makes me cry every time. It’s so sincere about feeling like, not only feeling the need to be taken care of, but like there is somebody who’s going to take care of me no matter what. It messes me up.”

Song that Raises Your Spirits: “Naive Melody (This Must Be The Place)” by Talking Heads

“It’s so bouncy and nice, and the lyrics are generally positive. It sounds like somebody who’s totally in love with everything, but not in an annoying way. It’s all presented in such a pure, believable way.”

Song You’re Most Proud of Working On: “One Down” by Slaughter Beach, Dog

“I do this thing a lot now where if I get in a good zone on a song, and I start writing verses, I kind of keep going until I stop, and not put a limit on it. As I write each verse, I’ll write it on a Post-It note and get it all out. And once I’ve emptied the supply, I’ll go back and rearrange the Post-It notes in what order feels the best. I think that was the first song I did that with, and I really liked the feeling of it. It became more special whenever I brought it to the band and we spent at least four or five months trying to jam on it every now and then, and it never really happened, never really clicked. And then we sat down one day and it felt really good. I love the way it sounds, the way it came out, and usually I’m pretty critical of those things in the long run.”