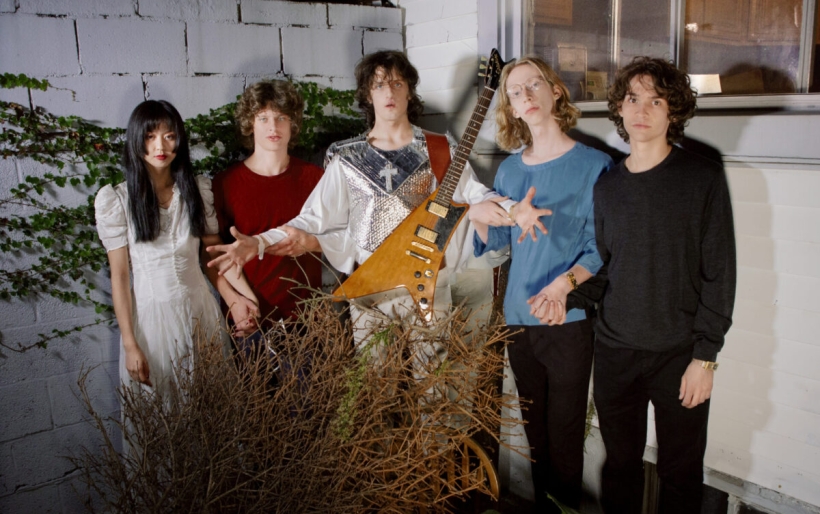 Godcaster | photo by Riley Buttery | courtesy of the artist

Philly-based art-punk outfit Godcaster‘s four most recent singles—”Serpentine Carcass Crux Birth,” “Apparition of the Virgin Mary in My Neighborhood,” “Don’t Make Stevie Wonder,” and “Christ in Capsule Form”– all sound as chaotic and varied as their titles suggest.

Ranging from less than a minute long to almost four minutes, each of these tracks thrashes with unhinged, manic rock. Godcaster’s sound is rooted in progressive garage rock; something about the ordered chaos of their music is energizing and tantalizing. Take a Talking Heads album and a can of Monster Energy, throw them in a blender, and voila: you’ve got Godcaster.

Thankfully, as announced this week, these singles are all part of an upcoming album: Godcaster’s debut LP, Long Haired Locusts, will be released September 4th on Ramp Local. Featuring David McFaul on keys, Von Lee on flute and vocals, Lindsay Dobbs on trombone and vocals, Bruce Ebersole on bass, Sam Pickard on drums, and Judson Kolk on vocals and guitar, Godcaster’s debut album was recorded, mixed, and mastered by Ryan Power. Long Haired Locusts was recorded live-to-tape, a sonic element which only furthers the band’s lo-fi, DIY, garage rock-esque aesthetic.

Pre-Order Godcaster’s Long Haired Locustshere, out September 4th on Ramp Local. Listen to the album’s singles on Bandcamp below.