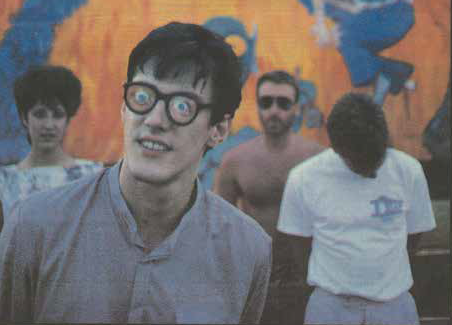 New Order in Trenton, 1983 | photo by Anton Corbijn for NME | via No Slam Dancing, No Stage Diving No Spikes / DiWulf Publishing

Cries And Whispers: Listen to New Order play City Gardens in Trenton in 1983

One of the more famous photos of Brit-rock sensations New Order was snapped on the evening of July 9, 1983, in Trenton, New Jersey.

The band was traveling with famed photographer Antojn Corbijn, who was documenting their U.S. tour in support of Power, Corruption, and Lies for the New Musical Express. They pulled into City Gardens on Corbijn’s last day with them, and realized they were still in need of a band portrait. According to Amy Yates Weulfing’s oral history of the venue, No Slam Dancing, No Stage Diving, No Spikes, Corbijn walked the band across the street to a carnival that posted up for the summer.

The carnival, as the book tells it, could be a place of racial tension on gig nights, a likely product of the rowdy music venue catering to predominately white punk and new wave fans being located in a predominately Black part of town. But the photo shoot went smoothly, with the band positioned in front of a large orange banner with a grotesque blue monster and the word “HELL” hugging the top of the frame; singer-guitarist Bernard Sumner is in front of the pack, wearing novelty googly-eye glasses.

“[Corbijn] ran across the road and bought two disposable cameras from the garage, came back, and shot us in the fun fair. That was the cover. That guy is either very lucky or very talented. I haven’t decided which.”

The show that the band played upon returning to the venue was equally expedient, offering no conversation but packing eleven expansive jams in just over an hour. The band was fired-up and unhinged, as we can hear in an excellent quality bootleg of the concert that’s streaming on YouTube; as much as New Order can be associated with shimmering, polished synthesizer-based pop and high-end production, their roots in rock and punk are on full display here, particularly on a gripping performance of “Temptation.”

Though it seems relatively early on in their career, the gig was actually New Order’s second appearance at City Gardens — they performed there in November of 1981, a week after the release of their debut record Movement — as well as their third appearance in the state of New Jersey — their first U.S. concert took place at Maxwell’s in Hoboken in September of 1980.

The setlist included four songs from Power, Corruption, and Lies; three songs from Movement; two b-sides (“Cries and Whispers” and “Hurt”) and two non-album singles that are among the band’s most defining songs (“Temptation” and “Blue Monday”).

The gig was also, as the story goes, infamous for Sumner getting pantsed post-set. As Hooky tells it in his book Substance: Inside New Order:

Barney had got into the habit of wearing these tiny, skin-tight white shorts on stage, and it was a very bad look. It annoyed me. I though they looked shit, and at this gig there was a young lady at the front of the audience shouting at him about his shorts all through the gig, which amused me greatly. After the show Barney walked out on the stage and was talking to [tour manager] Terry [Mason] at the front when this girl appeared again, shouted, “Oh, those fucking shorts!” grabbed them and yanked them right down to his ankles. He, like me, never wore underpants, so the sight of his big white arse waddling off the stage with these tight shorts stuck round his ankles will stay with me forever. Thanks very much, Vanessa.

This tale, for better or worse, is corroborated in No Slam Dancing by City Gardens regular Vanessa Solack: “Back then boxer shorts were the thing, everyone wearing boxer shorts as clothing. It was a no-brainer to yank [Sumner’s] shorts down.”

Listen to New Order’s July 9, 1983 concert at City Gardens in full below.