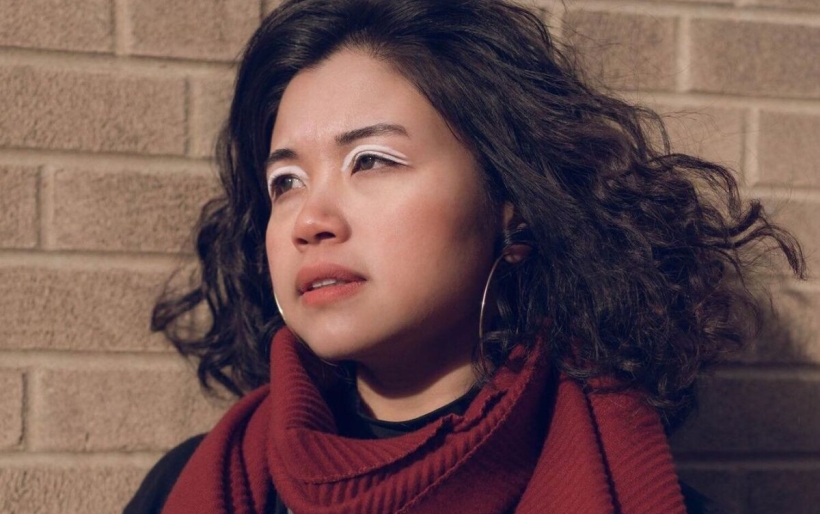 Mỹ Tâm | photo by Sin Weng | courtesy of the artist

Hyunh recorded PHILLY POP alone at home this spring, using only the gear that she has kept with her throughout the lockdown, but she connected remotely with a whole host of collaborators: Luca Farrell on keyboard, David D’arville and Zach Fischer on guitars, Peter Dennis and Summer Kodama on bass, Joey Sullivan on drums and Joseph Borsellino on saxophone. The concept underpinning the project came from a story written by Huynh’s friend Amber “Anba” Janssen, who also appears on several tracks as a voice actor.

Huynh titled the EP after ‘city pop,’ a wave of Japanese pop music from the 70s and 80s, like a bubbly blend of house, disco and synth pop. City pop celebrated the lush, cosmopolitan lifestyle idealized in cities like Tokyo and Osaka, and eventually became a romantic symbol for industrialism’s promises all around the world. But here, Huynh turns this romanticism inside out, broadcasting from a dystopian future haunted by the ubiquitous codification and commercialization of everyday life.

She pays homage to city pop itself, including on a cover of Mariya Takeuchi’s 1984 hit “Plastic Love,” but she also weaponizes the style to provoke questions about superficiality and commodified emotion: How can my happiness be real when it comes at a cost? Who controls my idea of beauty? How much of my life actually belongs to me? At first, the pop stars on Huynh’s fictional radio station sound like they’re singing about love. But after listening to the whole broadcast, it sounds like lovers in their world keep getting bought, sold, silenced and forgotten.

In a series of sharply honest pop tunes mingled with spoken radio ads, Huynh dances through forms of disconnection, alienation and personal despair that months in quarantine have made more real than fiction ever could. Last week, I spoke to Huynh over the phone about how she devised PHILLY POP, and what the project meant for her. Our conversation has been edited for length and clarity.

The Key: When and how did you first start working on music under the name Mỹ Tâm? And does the name have any significance?

Tammy Huynh: I started working on music under Mỹ Tâm late summer to early fall of last year. And the music I performed was original compositions I’d written during my last two years of music school.

In terms of the significance of “Mỹ Tâm,” it’s actually my Vietnamese nickname, and it’s also an anagram of my birth name, Tammy. I was first given that nickname by a friend I had made in Vietnam when I was little, and it was the only time and place I was ever called Mỹ Tâm, which made me a little sad. There was always a part of me that wondered if it was possible for Mỹ Tâm to exist outside of my memories of Vietnam, or better yet I wanted Mỹ Tâm to exist in the public eye. I think we live in a colonized world, so by operating under this name, it represents my resistance against the erasure of my Vietnamese identity.

TK: How did you first come up with the concept for PHILLY POP?

TH: PHILLY POP was originally a catalyst for me to explore mixing and recording, so there wasn’t initially a concept yet. It was more of just, I wanted to challenge myself to create despite not mastering something yet, and I also wanted to make a point to myself that you don’t need the fanciest stuff to create stuff.

The concept didn’t really flesh out until I reconnected with my friend Anba, who is also the voice actor that you hear throughout the EP. And she’s the one that’s writing the dystopian story that inspired PHILLY POP.

TK: Tell me more about the dystopian story that goes along with the EP. What other music or fiction were you thinking about while you were working on it?

TH: Yeah, totally. Anba is still developing her story, and based on what’s she’s shown me there’s a futuristic retro aesthetic to it. When I was talking to her, we thought it would be cool to come up with a radio station within the universe she created, and there are a few knots to the story that you hear during the commercial tracks. For example, the first commercial, “TEKKO,” references the fashion in this story – TEKKO is an app that you can use to coordinate and update your clothing on the go. And the second commercial, “ROOT NETWORK,” references a big brother system within the universe. According to Anba, each person is registered through ROOT at birth, and their personal information and data is meticulously extracted until death. So these are concepts that exist in the story; I know it’s a bit vague, but I also wanted to give some room for her to flesh out her story and use PHILLY POP as a catalyst as well.

I think Anba, when she was writing her story, she was thinking along the lines of the movie Akira, or Wolf’s Rain and Gundam. In terms of the music, a big influence is city pop, which is a subgenre of Japanese pop in the 70s and 80s, and I was particularly influenced by Mariya Takeuchi’s work, and we actually pay homage to her by creating a cover of her song “Plastic Love.” Overall, we imagined a radio station to play these upbeat, nostalgic songs to contrast the stark, futuristic landscape of Anba’s story. We could imagine the characters feeling a longing and hyper-romanticism for the past, which is something I think I feel nowadays, too. Because I love 80s music, and I think there’s something kind of comforting in that nostalgic feel, and a bit of escapism as well.

TK: Can you explain what your recording process was like, recording at home on your computer? And how did you pull off all of those collaborations?

TH: It was definitely challenging, but it also encouraged me to experiment and try new things. I think one of the biggest obstacles was just gear. I recorded this with a Rock Band microphone – do you remember the game Rock Band? So, I found that and plugged it in, and it worked just fine! It’s not the best, but it worked. There was definitely a learning curve, because like I said I’m still pretty new to mixing and recording. But that’s what the internet is for, and I met a lot of cool people on the internet that were willing to teach me and offer advice and encouragement. So the process was pretty humbling, and also I think there’s a lot of freedom in knowing that you’re not good at something, you know? [laughs] So there’s not that much pressure to be perfect.

And how did the collaborations go? Hmm. Due to the nature of social distancing there was definitely a lot of file sharing, and a lot of things left up to chance – you never knew what something was going to sound like until you got the file. But I think what made it easy was that I feel like I have a pretty good connection with all the people I collaborate with, and I think because of that we were able to maintain a cohesiveness despite not physically being there together.

TK: How did it feel to be writing such upbeat music – like the kind that’s played at parties and dance clubs – while living in quarantine?

TH: [laughs] Lonely – it made me feel lonely. But like I said before, we were imagining characters that kind of have this longing for a past that they never lived for, and something to escape from the dystopian world that they live in. And I think I felt pretty similar when I was writing that stuff, it was a sort of escapism for me. And I don’t know if it was just me trying to create an artificial feeling? But I think that’s kind of what made this EP feel more authentic to me as well.

TK: I noticed that your last release, the single “for lonely nights” has a totally different style and instrumentation than PHILLY POP, it’s more like a chamber arrangement. So how does your experience singing these pop songs compare to your experiences singing in other styles and other formats? Do you think those other experiences informed the work you did on this release?

TH: Yeah, they’re definitely very different, and producing both works looked very different. On “for lonely nights” there was a lot of written work, and also more rehearsal in order for it to be cohesive. And I guess the singing style is definitely much different; there’s a different aesthetic to it. But overall, each experience gave me an opportunity to learn how to lead an ensemble and collaborate with others. So even though they sounded very different I didn’t feel like I was performing that differently – I don’t know if that makes sense? – Because it was all music that stemmed from me, and they were all stories I wanted to tell, despite the aesthetic change. It didn’t really feel all too different for me, actually.

TK: Do you feel like it was an ‘ensemble’ who produced the music for this EP?

TH: [laughs] Maybe not in a traditional sense like “for lonely nights,” but I would consider us to be like an ensemble in some regard. We’re all musicians just trying to come together and play someone’s music, you know?

TK: Do you have any future plans for Mỹ Tâm that you can tell us about?

TH: Yeah, absolutely. Last month, the band and I started working on our first studio album, called Sunflower in the East, which we recorded at Rittenhouse Soundworks. We’ve been gigging it out since late summer, and I felt we were ready to start recording, so the album is projected to be released in 2021. Other than that, we are hoping to keep connecting with people when gigging becomes safe again. And who knows? Maybe we can make another album like PHILLY POP as well.

For the month of July, all proceeds earned through Mỹ Tâm’s Bandcamp page will go to Black Trans Femmes in the Arts (BTFA). PHILLY POP came out Friday, July 3rd.