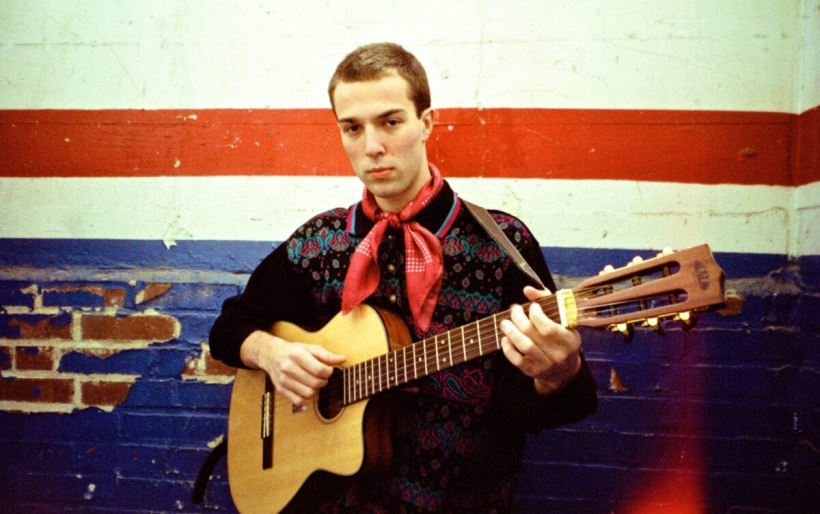 Grant Pavol | photo by Kate Killet | courtesy of the artist

Grant Pavol’s lead single, “Bones,” off his debut record About a Year, is dark. And not just tonally – a new music video for the song is shot in a dull black & white, brightened by a few dingy light bulbs.

Fittingly, Pavol opens the track with “We all desaturate / Nude pith descends to grey.” He immediately paints a colorless, lifeless picture, and considering “Bones” is about the death of his grandfather, William Goldman, this muted palette works to great effect. “Visually, I wanted the video to focus on urban decay,” he says over email, paralleling the literal decomposition of a corpse.

Initially backed solely by a twangy guitar, “Bones” is a literal, sparse examination of death and decay. “The bones just shake and shiver / Soft tissues broke,” he laments in the chorus. But while he sings about bodies breaking down, the production only grows. Sparse guitar plucks are eventually backed by a relentless drum kit, and the gentle plucks turn into grooving, catchy riffs, before the entire track glitches out in a frenzy of electronics. It’s a surprising breakdown, to say the least, and it’s over as quickly as it starts: the track closes with Pavol despondently sighing “My words were ill delivered / And rose like smoke.”

Watch the music video for Grant Pavol’s “Bones” below. Pre-order About a Year, out September 4th on Accidental Popstar Records , here.