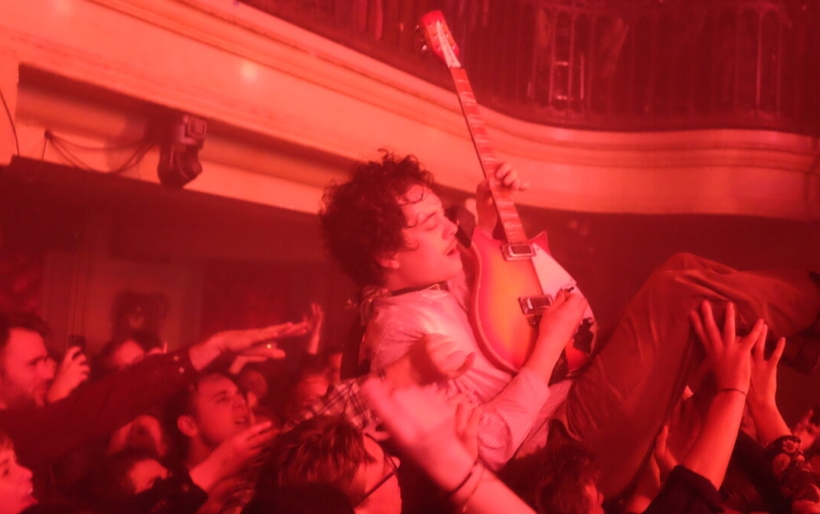 It was December 2017, a slightly simpler time. The year was wrapping up and amidst the rush to establish New Year’s Eve plans I managed to pull off one of the greatest feats of persuasion of my adult life. I convinced a dozen of my closest friends to spend their final moments of 2017 at Johnny Brenda’s with Lithuania, Pine Barons, and The Districts. Most knew one band, a few two, and a couple placed their trust that whoever these bands were, their show would be more fun than stuffing themselves into any of the bars/clubs that burst at the seams every December 31. We all met at my apartment, a few blocks from the glow of the familiar angled, dive-bar chic sign slicing its way into the Frankford/Girard intersection. It remains a vivid memory and one that, especially now, I can’t help reliving; friends trickling through the door, buzzing anticipation, excitement spilling over like pre-show drinks, the hint of worry that your favorite band might not live up your lofty expectations, all building to those steep, narrow, Johnny Brendas’ stairs and into a night where anything can happen.

Independent venues like Johnny Brenda’s find their home in every corner of this country, a sprawling web of art incubators that employ thousands of workers, and bring millions the joy of live music, each injecting their town or city with distinct personality. Now, with the COVID-19 outbreak, this is all in jeopardy. Yes, there are countless other industries which will struggle to survive, but nothing as irreplaceable as the one centered around a night in a dark room with strangers and friends alike, where social distancing melts away and real connection is possible.

For those on the frontline, the early stages of the outbreak were a blend of panic and uncertainty. “It was kind of eerie,” says Hal Real, Founder and President of World Cafe Live. “I got a little choked up because I thought to myself, wow, when is the next time there is going to be live music in this building.” World Cafe Live, a two-stage venue in West Philly that shares a building with the WXPN offices, hosts live music about 350 days a year but, like every venue in Philadelphia, has been empty for months. Real admits that even on that reflective evening in mid March, he could have never imagined just how long that absence would last.

For others, there was barely time to process what any of this meant. Barrett Lindgren, the head Talent Buyer at Johnny Brenda’s, describes the days after the first show cancellations as some of the busiest of his career. “Part of what was so tough right off the bat was trying to get information and putting together a coherent plan of action or guidelines for what was going on.” Lindgren watched as Philadelphia officials scrambled as well, issuing one restriction after another, limiting venue capacity from five hundred to twenty-five than zero in a manner of days.

This posed a particularly troubling question for independent venues; what to do about tickets already sold? “At first, it wasn’t a huge issue because I think a lot of us thought we’d have to shut down for a few weeks,” says Real. But as the full scope of COVID-19 came into view, venues were forced to reckon with the problem of cancelling rather than rescheduling and the refunds that came with it. Not only were these venues cut off from any sort of revenue for the foreseeable future, they were sending out revenue they had already counted on to pay rent and other bills that have yet to cease.

This brings us to the National Independent Venue Association (NIVA) a group formed to help deal with this and the countless other issues brought to the fore by COVID’s debilitating effect on the concert industry. Officially launched on April 17, NIVA already has over 2,000 members in all 50 states and Washington DC, as well as the support of hundreds of artists around the country, from Neil Young to Billie Eilish and everyone in between (the tag #saveourstages is popping up all over social media). With this collective power, NIVA is putting pressure on governments both federal and local, driving home the true importance of independent venues both economically and culturally.  “We have been able to create a voice that none of us had independently.” says Real, who is secretary and founding member of NIVA.

This voice is focused squarely on congress, demanding, among other things, they take into account the fact that most business loans given out to help other industries don’t make sense for one that will be among the last to resume normal activities. While we are beginning to see restaurants open at limited capacity around Philadelphia, this simply is not an option for concert venues.  It may be unfortunate, but strife can often lead to a solidarity that’s impossible in more lucrative times. With all independent venues now in the same leaky vessel, it was time to bind together and fight for a more certain future.

“I sent an email letting them know that we could do whatever they needed from us” says Kyle Costill, owner and operator of Ortliebs in Northern Liberties. “We fully support everything they are saying.” He wasn’t the only one, as venues from every corner of the city, including MilkBoy, The Barbary, Union Transfer, and of course, Johnny Brenda’s and World Cafe Live, signed on as charter members of NIVA. “The primary glue holding us all together is the existential crisis we all face in this sector of the national music ecosystem,” says Real.

As Real tells it, though, this was something he’s had in his mind for years, far before the COVID outbreak. The virus may be putting the concert industry on life support, but it was one with a whole host of pre-existing conditions. Running an independent venue means slim margins even in the best of times, most surviving very much day to day or week to week. The very nature of their independence makes life harder. Where venues run by corporate powers like Live Nation, AEG or Bowery Presents have the benefit of teams of promoters, talent buyers, accountants, and a full marketing staff, each independent venue must tackle every aspect of the business on their own. “It is a daily grind to try to find the right events with the right people to maintain what we have going on,” says Costill.

Right now that grind is looking quite different, with venues turning toward non-traditional means of providing fans entertainment — like the recent rooftop pop-up at Johnny Brenda’s, which you can read more about here. There are also livestreams, but Real half-jokingly says “It’s like looking at pictures of food,” even as he admits it is something World Cafe Life is exploring. “It’s just not the same. It’s never going to fill you.” But given the economic landscape, anything is better than nothing and all venues are reaching for whatever it will take to keep them afloat. In a recent survey by NIVA, ninety percent of independent venues said they will have to close permanently if they are not able to open for business within the next six months, a dire prognosis to be sure.

NIVA is working to express just how devastating this would be not only to the music scenes, but to the economy of the cities themselves. The industry is far bigger than people think: a 2016 IBISWorld study found that live music produces over $20 billion a year. The tendrils extend far beyond ticket sales alone, as a Chicago Impact Report cited, finding that for every one dollar spent on a ticket, a total of 12 dollars of economic activity was generated. That’s not to mention the dozens of employees working a venue each night, from the person working the door to the sound technician. “Venues need to be able to survive this pandemic and thrive on the other side of it for so many reasons, and the economic health of our cities is absolutely one of them,” says Lindgren. “It’s a no brainer.”

Economics can only tell so much of the story. Independent venues shape the culture of a city in a way numbers or studies can never truly capture. “Small and mid size venues are integral to every city and scene,” says Philadelphia indie-rocker Ali Awan. “They’re where creatives hone their respective crafts, meet like-minded peers and collaborators, and generate revenue to keep their art moving along.”

Venues like World Cafe Live, Johnny Brenda’s, and Ortliebs take this responsibility very seriously, recognizing their role as incubators for talent and creativity. Costill cites a band like Philly-based indie-rockers Mo Lowda & The Humble, who first played Ortliebs seven years ago and, despite moving up to much larger venues like Union Transfer – where they were set to headline on March 27th, before the quarantine clamped down — they continue to come back and play Ortliebs’ small back room. “We try to build relationships that last over a long stretch of time even with touring musicians,” says Costill. “We know Ortliebs isn’t the last destination for these bands, we just want to be a great part of their experience.”

Despite all this, most local and federal lawmakers seem to be overlooking the concert industry when planning for the future. Real believes their previous lack of communication and organization as independent venues allowed for this kind of ignorance, and others agree. “My hope is that this insane experience will create some meaningful bonds of solidarity for the independent music community to come back more united,” says Lindgren. NIVA is positioned to do just that, creating a hub for these venues to discuss issues that affect each other all over the country, even well beyond the current crisis. “I see how much these venues mean to people,” says Lindgren. “And I know how much JB’s means to me.”

Which brings me back to the last moments of 2017. It’s later in the night now, I’m covered in sweat, the floor shaking beneath our feet, The Districts’ Rob Grote whirling around stage like a man possessed, a dozen of my closest friends and some hundred strangers taking in the New Year, connecting in a way only possible through the joys of live music in a small, intimate setting. It’s this moment that NIVA is fighting for, the moment we will need more than anything when this is all over.  “Our business is the opposite of how the world is,” says Hal Real toward the end of our conversation. “Our business is about bringing people together.” Here’s to hoping that this business can continue to do that for years to come.