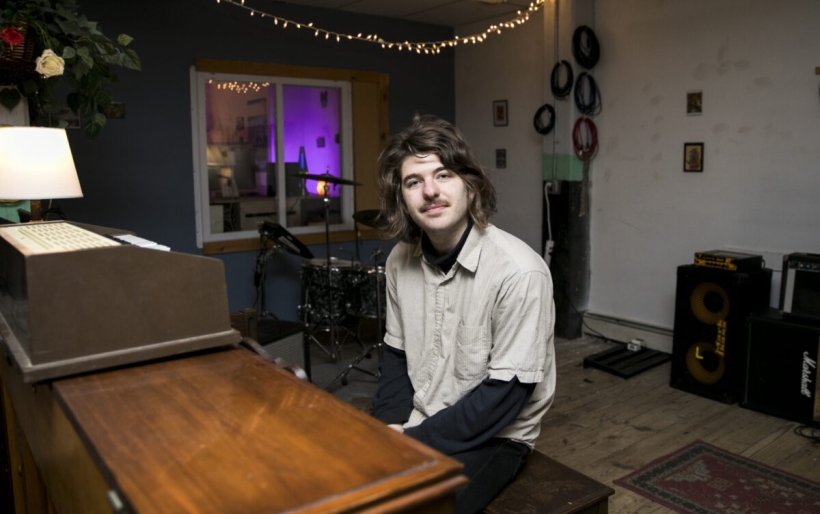 The Districts | photo by Rachel Del Sordo for WXPN

Haggert McTaggert, the product of The Districts‘ Braden Lawrence and Pine Barons‘ Keith Abrams, released a new LP this past week. Songs Of Abstraction is ten tracks and forty minutes of atmospheric psychedelia, featuring cameos from other scene veterans.

The root of Haggert McTaggert lies in the collaboration between Lawrence and Abrams, but the duo call in some old friends for additional instrumentation. “Living Backwards” is essentially a Districts track, with Rob Grote and Pat Cassidy on guitar, and Connor Jacobus on bass. Grote also appears on “Masterpiece Vision,” “Flan Party,” and “When Things Go Bad,” and supplies bass on “Braindead.” Longtime collaborator Casper Rudderow also provides vocals on “Dolphin Show” and “Flan Party.”

That said, a Districts this album is not. Songs Of Abstraction delivers on its title, delivering a moody, atmospheric album that defies easy description. The music itself is amorphous: with every new listen, a different aspect jumps to the forefront, whether that be Lawrence’s hollow voice, the faint sound of guitars behind him, or the auxiliary elements, robotic voices and the faint hums and whirrs of machines. The combination is pleasant, it is unsettling, it is both, it is neither.

Listen to Songs Of Abstraction below.