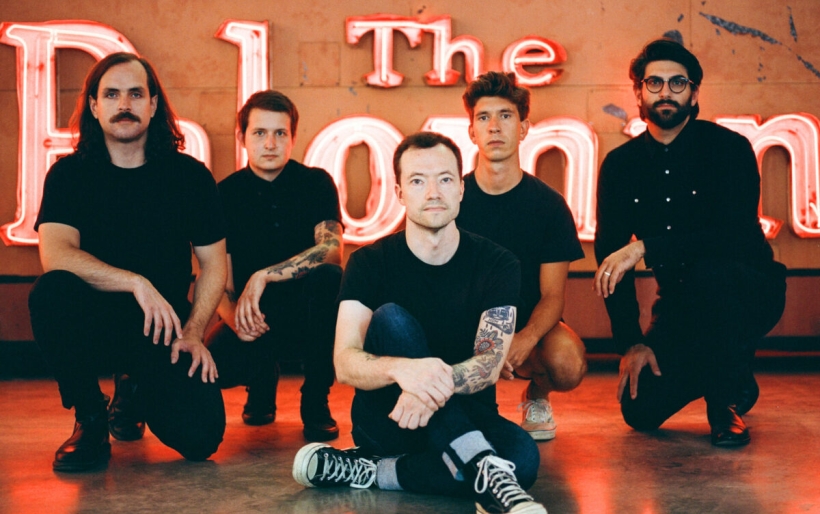 Touche Amore | photo by George Clarke | courtesy of the artist

Los Angeles post-hardcore outfit Touche Amore announced this week that their fifth studio album, Lament, will be out October 9. As part of the announcement, they shared a new track from that upcoming album, “Limelight,” with a guest feature from Andy Hull of Manchester Orchestra.

On “Limelight,” vocalist Jeremy Bolm is at his most raw, screaming “I’m tired and I’m sore / I’m not so proud anymore” in his trademark sound, more shouted-word than spoken. Hull’s wounded falsetto cuts through on the bridge, bringing his own pain on lines like “The worst’s yet to come / Well, the worst’s not invited.”

Hull and Bolm sing over each other at the track’s climax, a swirl of frustration and desperation building on itself. The singers are buoyed by the swell of instrumentation behind them, particularly Nick Steinhardt’s newly-learned pedal steel guitar.

The band says of their new song,

When you’re connected to someone long enough, and you’ve both suffered losses and been there for one another, there’s an understanding and a beauty to the quiet moments. There’s a great line in ‘Pulp Fiction’ when Uma Thurman boasts knowing when you’ve found someone really special, when you can just ‘shut the fuck up for a minute, and comfortably share silence’. I imagined that you’d be shamed for casually omitting that a day or two may go by without realizing you haven’t kissed your partner, but at no point did things feel bad. You’re just in it and it feels like home.

Lament is the band’s first release since 2016’s Stage Four, a tribute to Bolm’s late mother. This new album is meant to reflect on Touche Amore’s past and present through a lens of hope and optimism. The band, in conjunction with new producer Ross Robinson, wanted to mine their artistry and emotions and work outside their comfort zones to create a record that feels new.

Pre-order Lamenthere. Listen to “Limelight” below.