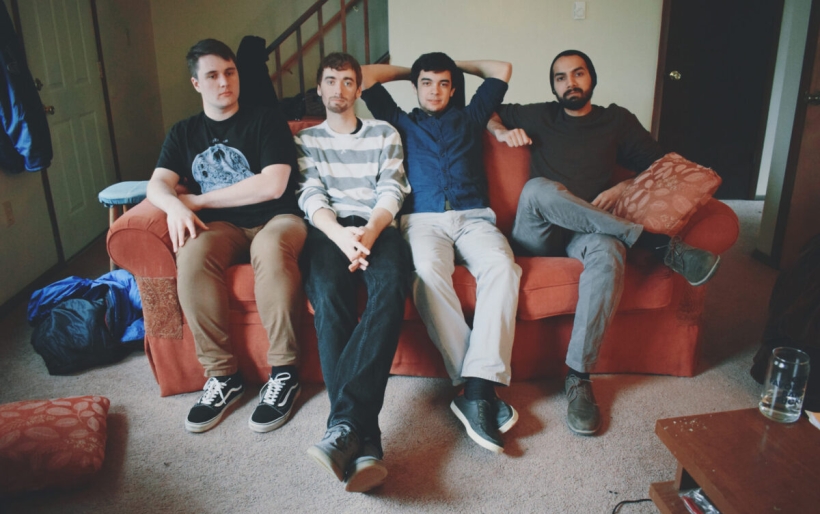 Palmlines | photo by Kristina Abuladze | courtesy of the artist

Palmlines resists oppression and tyranny on Velcroed To Passing Clouds

Palmlines, a Philly–based math rock four–piece, is one of the most exciting new bands emerging on the scene. Their latest EP, Velcroed To Passing Clouds, was released earlier this July, following their debut album, 2017’s Get In Line, Lucy.

Both projects are phenomenal: the group melds softer indie rock sounds with manic, head–banging guitar and vocal riffs in dizzying meters. They sound like a blend of Thank You Scientist and Vampire Weekend: they play highly technical prog/math rock, tinged with earworm melodies and a gentle, almost twee, touch.

I was able to chat with a few of the Philly–based band members (drummer Sebastian Goodridge, guitarist Brad Sorman, and lead singer Rashmit Arora; bassist Otto Kuehermann is based in Carlisle) this past weekend. Velcroed To Passing Clouds was released as a concept album of sorts – Palmlines’ Bandcamp describes the project as referencing “the cycle of succumbing to your oppressors, overcoming them, falling prey again, but eventually coming out on top.” This idea came to the group throughout 2019 and 2020: Arora explained that “it was at this moment where thousands upon thousands of people were pouring on the streets of countries around the world. Colombia had protests going on. Countries in the Middle East had a lot of upheaval.”

And now, in the midst of protests that have been sweeping our country for months, with federal agents deployed to maintain “law and order,” the project has gained increased relevance. Palmline’s concept seems almost prophetic; oppression truly is cyclical, with no end in sight, until the oppressors are dealt with. To parallel these constant, perpetual cycles of abuse, Velcroed To Passing Clouds loops infinitely. “The last song goes right back into the first song… we almost always have some kind of an oppressor bearing against us,” Arora says.

Beyond the heady, incredibly relevant idea driving the album, the music itself is incredible: it’s varied, dense, and all four band members are clearly masters of their craft. On the second half of “Fall Into The Sun,” there’s this moment where, after a lengthy buildup, the band joins together, melding into a breathtaking groove that hits hard enough to make you drop whatever you’re doing in awe. It’s not the most complicated stuff to ever be labelled “prog” or “math,” but there’s something about their music that’s infinitely accessible. It’s as close to easy listening as this sort of rock can get: pop vocal melodies and insanely catchy guitar riffs share equal weight with bizarre time signatures and highly technical drum fills on Velcroed To Passing Clouds.

Palmline’s injection of power pop melodies into a traditionally more inaccessible genre is a key aspect of the group’s songwriting process. Sorman explained that aspect was “a pretty conscious effort. Sebastian was really into trying to sneak a little dance beat underneath other riffs.” Arora added, “we are all technically capable musicians. But we realize that not everyone gives a shit about playing in ridiculous times. We do that a fair share, but we were definitely trying to make this genre more approachable. We can do the noodley guitar thing, but how many people actually care about that, or are actually drawn to that? So that’s definitely a part of the shaping of the sound, trying to make prog rock – really technical music – more approachable.”