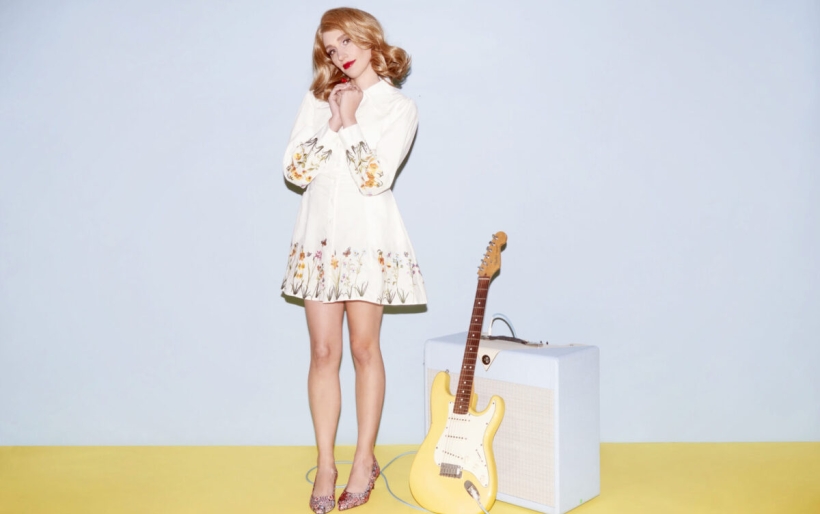 Sad13 | photo by Natalie Piserchio | courtesy of the artist

The new song from Sadie Dupuis’ solo project Sad13 features a syncopated drum beat and perfectly-placed distorted guitar riffs to give the song a distinctive swagger as the Speedy Ortiz frontperson throws back insults she has received over her career: “Portrait of a songster / Young hussy crossed with cuddlecore / 10,000% out for blood.”

The song will appear on Sad13’s new album Haunted Painting and the video, directed remotely by Kimber-Lee Alston, depicts Dupuis as a vampire in vintage clothing, baking a cake out of her latest victim and enjoying a bloody martini.

Dupuis describes the process of crafting “Oops…!” as such:

We recorded “Oops…!” at New Monkey, which was Elliott Smith’s studio. This one has a magic drum sound – thanks entirely to engineer Sarah Tudzin (of Illuminati Hotties notoriety), and Zoë Brecher’s impeccable playing. Just before writing it, on tour with CHVRCHES, a venue employee became physically and verbally violent with one of my Speedy Ortiz bandmates. He directed his fake apology at me instead of the person he harmed, presumably because I am smaller and present feminine. My vengeance complex kicked in and I got a scary adrenaline high making sure this unsafe person was removed from the show. While I’m glad I have protective instincts, I wrote the song to process ways in which I’ve used people’s assumptions about me and my body to wield my own version of toxic masculinity. Kimber-Lee Alston, who directed remotely via Zoom, turned this story and song into an allegory about a 1950s prom queen vampire who lures in her bad boy victims with delicious, blood-filled treats.

In a press release, Dupuis said of her new album, “I worked on Haunted Painting throughout 2019, writing, arranging and recording from home, then finishing the songs in studios around the country in between Speedy’s fly-in dates. It’s maximalist, and more true to me and my tastes than any record I’ve done.”

Watch the video for “Oops…!” below. Sad13 will release the album Haunted Painting on September 25 via Dupuis’ label Wax Nine.