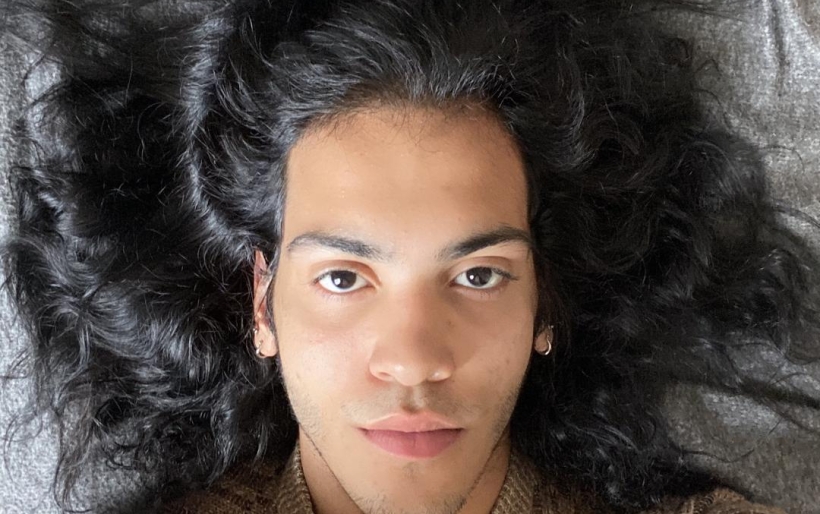 Avhsoj (pronounced “Joshua”) is the stage name of 22 year old Joshua Ulysses, a queer composer from central Pennsylvania via the Bronx, now residing in North Philadelphia. They use tonality, electronics, and sparse minimalist structures to create a depth of musical feeling that is inconceivably vast. A life-long musician, Avhsoj was at first drawn to classical music and composition but, despite a natural calling, cites an uphill struggle against the industry’s various isms that led them down the path of homemade electronic esotericism.

Their sound ranges from dreamy, space-trap like on “Reclaiming What’s Mine (Goddess)” to dubbed out blissful laments like “Chocolate Bedside” from the EP  ¾,  a record that shows the power and experimental nature of the range of what they consider their main instrument: their voice. After writing on various apps on their phone, Avhsoj then recorded the vocals for both ¾ and another EP .5 in a closet using shitty computer headphones. The results are cacophonous beauty– vocals swirl like bright nebula in a cosmic soup over hypnotic, often droney beats that pulse and vibrate.

Just as it seems Avhsoj is defining a sound that they’ve fought hard to cultivate, navigating the misogyny and elitism of academia and the music industry, they present the world with an even stranger melange: 2020’s Heirlooms, I Never Had. This three-song EP features sweeping passages of Clint Mansell / Ben Frost-esque sci-fi score moments, New Age R&B synth swells, and lyrics where our “pain, suffering, and damage” are all “garbed in the warmth of embrace.” While the range on these three songs expands the Avhsoj sound, the mystery deepens. We spoke with Avhsoj via email to peel back some of those gorgeous, dreamy layers.

THE KEY: So Avhsoj is “Joshua” backwards. Do you find that Avhsoj has become a persona you wear for music, or a larger aspect of your identity? Do you think it’s possible to separate the artist from their art, why or why not?

AVHSOJ: This is definitely one of my favorite questions. I feel as though Avhsoj is the persona I aspire to be. Avhsoj is where I can allow myself to be vulnerable with the pain I seem to never be able to get rid of. Avhsoj is exactly Joshua backwards. It’s where I am introspective and reacting to my emotions through song-writing. Using the name Avhsoj instead of Joshua puts my identity into this cryptic form of self-realization. Where I, Joshua, is there but also really not, Avhsoj. It’s like astral-planing in a sense.

As for separating the art from the artists, absolutely. Avhsoj is this figure that is so sure of themselves and garbs it in this form of demure/submissiveness. Whereas, Joshua is a present and persistent person who truly is not sure of their identity. All together, what makes both of these identities come together is their vulnerability to question themselves and their fear of complacency.

TK: One of my favorite lines of yours is “Deciphering this code in my mind, makes me question again.” It seems to be talking about the cyclical nature of being immersed in your own thought process. Can you talk about that line, and the song “Heirlooms, I’ve Never Had” in general?

A:  That line in specific is me commenting on the cyclical nature of me always reminding myself of what could have happened with a significant other. Or, what should have been done to keep that significant other or even to keep my sanity, haha. The song in general is about me questioning my toxic thought process on dealing with heartbreak. I have a tendency to sulk in this contemplative “what if?”

“Must we see all of our pain, suffering, and damage garbed in the warmth of embrace?” — this line is referring to there being explicit details as to why certain relationships of mine haven’t worked out and me continuing to garb them in the light, brief moments we once had.

“Indeed, it’s all in my head. Heirlooms, I’ve never had.” is right after that previous quote. It is an awakening for Avhsoj. Where those moments are simply memories that I tend to carry along for brief bliss moments of remembrance.

I end the piece with a Spanish spoken word to [allude to] the point of me never having a physical part of my past family / culture to hold onto. I am talking about a lover who is white, and integrating them within my Spanish lexicon to create my own heirloom in a sense of my present life to then pass on as a lesson to others.

TK: Queer expression is often charged with an immovable fierceness. Avhsoj seems to connect with a softer, more intimate side of queerness. Can you talk a bit about the vulnerability in your music? Is this intentional? What emotions and ideas are you giving space to in your songs?

A:  Wow, that first point is so damn valid. I mentioned before that I am a trained singer. So I do have the capability to sing louder and more present. But, that would take away from the overall message of my music. Which is: taking off the drag I as a person put on everyday, and finally revealing to myself what problems I as a nonbinary queer person am facing through aspects of love and life. The soft tone in my voice comments on us as queer fem people being presentable enough for a lover to be interested in us. That is why a lot of my music is ambient and more instrumental-based, because it forms this sonic reality of passivity within the queer culture to be recognized and to be loved. Figuring out my identity and getting this confirmation on how intimacy with others has tarnished, evolved, and shaped who Joshua is, is what Avhsoj is pleading for in their music.

TK: Have you interpreted your music live? What is your general set-up like and how has the audience response been? Do you find Philly to be a place where Brown queer folks can connect to an empowering music community, why or why not?

A:  I am so glad you asked me this question. I have never performed in Philadelphia for the past three years living here because I haven’t been able to find a space that will truly admire my sound first and then me as an artist. Being brown and nonbinary and queer it is very easy, especially in a very cis-dominated musical community, to tokenize me and only allow a brief relevancy of my art to be shown. Whereas I notice cis men who create similar sounds with one another, have an enduring music community within Philadelphia. I am in no way saying that there isn’t a potential open queer music scene. But what I am saying is that, our art forms are taken from us and used into the cis-gendered community without our recognition most of the time. And that itself, has discouraged me as an artist to perform live.

TK: While your music may be a recent discovery for me, I can still trace the evolution in it, from a kind of tripped out, beat oriented goth-tinged R&B, to what is now composed, orchestral and film score-like soundscapes. Was this evolution intentional? Can you describe the journey that brought you to more a composed sound?

A: The evolution is absolutely intentional. That is why I named the works numerically to potentially lead to a whole number which would be my debut album or official big work. .5 was when I knew for certain I wanted to publicly release music. But, at the time, I was highly concerned with the consumption of my music and if expressing deprived moments of my queerness would be palatable for the listener. Hence, me making .5 which is exactly what you described it as. This sort of siren-like ambience where I tempt the listener and once intrigued I bring up topics involving forbidden love and attention. It then ends with Neo-Gregorian Chant which is a preface to the next EP.

3/4then starts with the song “Invasion”, where I wanted to create a soundscape of this sort of royal figure having their castle invaded. This concept of royalty and self-assurance being invaded from allowing others to take heed in your work. 3/4 became more composed because I wanted the lyrics to be the pinnacle of the work. The soundscapes allowed me to fully involve myself with the lyrics and finally allow listeners to hear my authentic voice and timbre.

Heirlooms, I’ve Never Had was my quarantine work. I had heard Bjork’s “Heirlooms” and realized that I never have had heirlooms of my own. I created these cinematic works to transport us as listeners outside of our sequestered areas and into a space of fantasy.

TK: The photography on your Instagram is compelling too– vacant houses that feel lived in, photos that show both negative or empty space but also tell a story. Also abandoned objects like discarded food or busted open milk jugs. Why do these types of spaces interest you? What do you find compelling in the discarded?

A: Thank you! These spaces interest me because I relate to them. A space that was used for moments of bliss and engagement. To then be abandoned and completely forgotten. Only to be seen and never fully acknowledged. Being nonbinary, i’ve always felt this way.

A: Hehe. I am in the process of working on my debut album which has just been a never-ending process of me exploring different sounds. Absolutely interested in working with other artists who would want to share their sounds with me. And hopefully perform sometime soon!