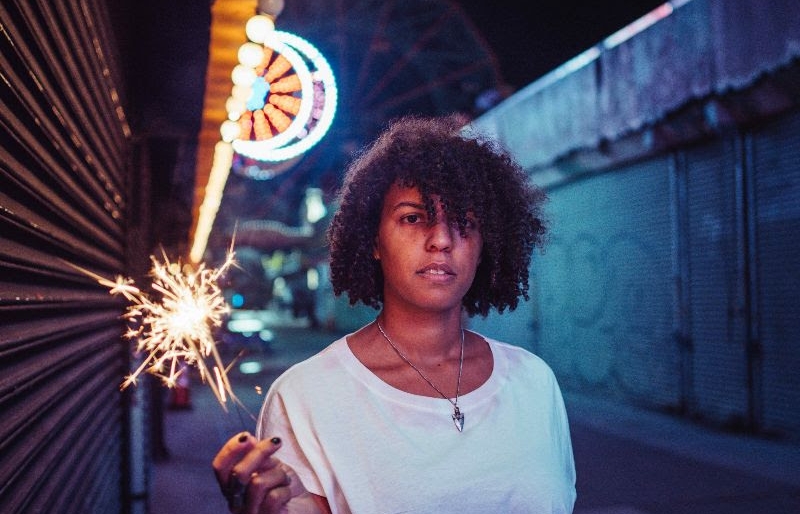 It can all feel so insignificant. Everything. Or maybe it’s that everythingis so significant that we feel washed out and numb. Either way, mundanities, minor annoyances, and momentary struggles can all feel trivial, with the rest of the world raging outside. But in a way, the world’s struggles only make the tiniest moments all the more important.

Elise Okusami seems to know this intrinsically — her new record as Oceanator, Things I Never Said, has an overarching through-line of apocalypse and global ruin that’s more an invitation than world-weary deflection. It’s a record that finds universality in the big and small, from the epic six-minute journey of “Hide Away” and the tight, riffy, exaltations of “Heartbeat” to “I Would Find You,” a synthy ode to friendship that could soundtrack a John Hughes movie about the end of the world.

Things I Never Said is a gloriously granular record; an intimate look at a crumbling world. I recently spoke over the phone with Okusami about Oceanator’s newest release, the creation of her new label Plastic Miracles, that persistent apocalyptic imagery and much more.

One of things that sticks out when listening to Things I Never Said is the apocalyptic imagery that pops up throughout the record. When did you recognize that as a recurring theme?

I write a lot about that. It is just a theme that is pretty consistent in my writing. I had like 15 songs that I was considering for this record and as I was going through stuff I was realizing a solid amount of them were very apocalyptic so it made sense, thematically, to group them together as an album. After I cut that down a little bit I realized they were actually the ones that fit together musically as well. It wasn’t intentional to make a concept record about the apocalypse or anything but it became clear as I was deciding what the collection would be for the full LP.

I’d like to talk about the recording process for a bit. How did you end up working with Eva Lawitts and Chris Krasnow from Wonderpark Studios?

I have known Eva for a long time, having played with them in another project and even some shows with Oceanator, so when they opened the studio I wanted to do something with them and it just ended up working out schedule-wise. It was really great working with them. They are awesome and have some really great sounds. Eva is just a killer bassist. The songs that we didn’t do there we did at my brother’s studio in Maryland, which is where I usually record.

So it must be a little different working with family than with someone new.

For sure. Almost everything I’ve recorded has been at my brother’s studio and he does all my mixing and even mastered the previous two EPs. With my brother, we’ve been playing music together since he was eight and I was six so we don’t really have to talk about stuff — he just kind of gets what I’m going for. That is definitely different when you are working with other folks, but I have been pretty lucky because Eva and Chris were on the same page as me. It wasn’t quite the same level of complete intuitiveness, but it was still very smooth and easy.

Your previous work was released on Tiny Engines, the now defunct indie-label, but Things I Never Said is set to be released on Plastic Miracles, a label you started just this year. Is this something you’d thought about for a while or more of a reaction to the Tiny Engines mess?

I’ve been wanting to do a label for a long time. I had the name and everything and the plan was to start it this year either way, but when I made that plan I wasn’t going to be releasing any of my music on the label. So it was definitely in the works, but I don’t know if I would’ve started it as early in the year as I did. It definitely would have taken a different trajectory had my record still been coming out on Tiny Engines, but it’s been a great project so far and something I’m looking forward to doing in the future.

I don’t plan for it to be some huge label that is bringing in money, I just want it to be self-sustaining so I can continue putting out other people’s music. I have plans for four more releases this year and already two scheduled for next year. I’m also doing these twice-a-year compilation tapes that are half donation, half going back into the label to fund future releases. When it’s safe again, I want to do a bunch of pop-ups with other labels and other local creatives too. I just want it to be a fun, community-based thing. I have big plans that are not my record and that was not the reason for starting it.

Even though it’s the second song on the record, “A Crack In The World” feels like an introduction. In particular, I love the line about how it is hard to have big dreams, but just as hard to let those dreams die. Tell me a little bit about the push and pull of those ideas?

For me, I was specifically thinking mostly about music stuff. I had this big idea growing up that I was going to be in a band, I was going to tour and that was going to be my thing and while that is happening, it is not my job. That was written during a crisis moment where I was thinking whether I need to figure out some other career. Is this doable? How much longer can I be touring? Stuff like that. And also just generally, when you are a kid you think of all the things you are going to do and how it will all be awesome and then you grow up and realize it’s hard to keep struggling. But, of course, it is just as hard to give it up because it’s something you’ve wanted for so long and still want.

I read you recorded “Heartbeat” somewhat like a live performance. Is that something you did only for that song?

No, actually we did that for all the songs at Wonderpark. “Goodbye, Goodnight,” “A Crack In The World,” “Hide Away,” “Heartbeat” and “Walk With You” were all recorded live in the studio. Eva played bass on all of those and Andrew Whitehurst, who’s been my touring drummer, played drums on all of them except “Heartbeat.” I wanted to give it that energetic feel and make it feel like a performance and not have it be quite as rigid as it would be if I did it all track-by-track.

Staying with “Heartbeat” for a second, I think the riffy, chaotic sound of the song, especially the latter half, is a perfect example of how you show and not tell. How do you balance the emotional impact of lyrics versus letting the music take over?

The music all comes first and the lyrics are always the last thing, so the music is already telling me the mood of the song and what it’s going to be about. A lot of times I’ll have sort of a video idea, along with a general story, for the song before I even have full-on lyrics. Basically, I’m seeing something, the music is making me see a thing and the lyrics are fleshing that thing out to make it more visible. Ultimately, whatever I feel like the music isn’t saying is what gets written into the lyrics. I like having instrumental sections that can tell as much of a story as the lyrics.

“Hide Away” is such an epic song — did it always start as this big centerpiece for the record or was it something that just kept growing?

I shrank it, actually. It was originally nine minutes. So yeah, it was really long and I cut it down a bit because I just felt like nine minutes was a bit too much. That song was very much supposed to take you on a journey and you see this whole movie. I think it goes to a lot of places. You start out in one place, then you go to the bridge, then a little filler and all of a sudden you are in the other bridge. I did mean for it to be a journey but it used to be 150% of that.

This is another one that uses apocalyptic imagery. How does framing something as big as the end of the world against more small, personal moments of intimacy help make sense of those moments?

I am not really sure, but it’s something I’ve been thinking about a lot recently. It’s been something I’ve been interested in for a long, long time. I like really over-the-top melodramatic things a lot. I think having the big end of the world themes give it just enough space from my actual life, without giving away too much of my inner thoughts. It’s a way to get the thoughts out without being super specific. I’ve been drawn to literature and art about the end of the world [for] a long time as well, and recently started reading N.K. Jemisin’s book, The Fifth Season from the Broken Earth trilogy and the first line starts with, “Let’s start with the end of the world.” I knew immediately that I’d found one of my favorite books. It’s been a theme in what I write and enjoy for a long time.

“January 21” seems to be about how we channel the kind of anger that this world can constantly make us feel. Is music an effective way to work through some of these feelings that aren’t always easy to talk about?

Definitely. For instance, the song “Inhuman” from my last EP is about a sexual assault, so it is hard to talk to about and was extremely hard to talk about then. Only recently has it become easier to talk about, but writing the song was super helpful. I thought playing the song on tour was going to be hard, but it actually turned out to be super helpful and would connect with folks and mean something to them as they processed trauma. So that was really an amazing thing. I’m pretty bad at talking about my feelings. Sometimes I can’t even think about feelings really, they’re not clear thoughts exactly. So writing music and lyrics is definitely a way that I process them. A lot of time, it’s after the song is finished that I’ll see what exactly I was talking about because it’s just sort of been floating around in my subconscious until I process through it musically.

I noticed you started a Patreon back in March. What kind of stuff are you doing with that?

I’ve been putting up some demos and B-sides, stuff I like but just haven’t found a place on any other releases, some cover songs, and I even started a podcast called “Stoked To Announce.” I’ve been slow with the podcast, but it’s got a couple episodes where I interview some people. The Patreon subscribers also get all the news first — they’ll hear the songs first, know about the album coming out first, all the label stuff. I want to grow it into some other stuff once this album’s cycle is over. Whatever kind of fun art, community stuff as a way to interact now that shows aren’t happening.