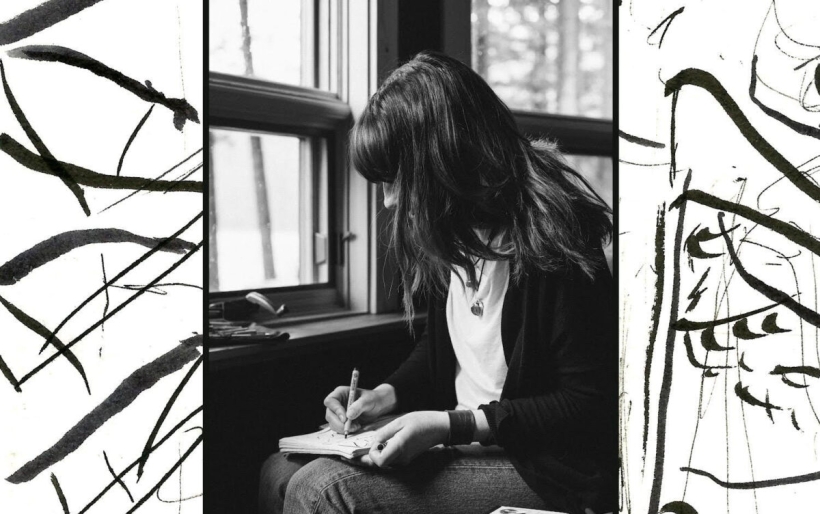 15 years ago, Frances Quinlan spent the summer between her first and second years at MICA making Freshman Year, the first full-length release by her band Hop Along.

Then known as Hop Along, Queen Ansleis, the project was essentially a solo Quinlan pursuit, with some studio collaborators like Chris Archibald of the band Illinois and the late Damien DeRose of the band Peasant, and was oriented in a direction inspired by Daniel Johnston and freak folk.

This week, for the album’s 15th anniversary, Freshman Year has been officially released to streaming services for the first time, including a Bandcamp-exclusive bonus EP called more songs from 2005.

The three bonus songs — “The Diver Song,” “Marigold and Mr. O,” and “King Crab” – had a previous life as a rare demo called Songs of the Sea: Semi Nautical Themes. Quinlan will use the Bandcamp sales to benefit the Philly homeless services and advocacy nonprofit D.O.P.E. (Doing Our Part Eclectically). Quinlan will also play an Instagram livestream set tomorrow, September 5th, at 6 p.m. EP to celebrate the anniversary.

In a press release about the year that begat Freshman Year, Quinlan says “I must have been pretty hard to be around that summer. … I would come up from the basement frantic, in tears. I was 19 and trying to make the album that would transform my life, make me famous.” The summer was almost over when she finished, and hustled from Bucks County to Long Island to have the album mastered by Phil Douglas of Iron Chic, while hand-making sleeves to sell in her parents’ backyard for the release show. “For this I had the brilliant idea of making the first 20 or 50 (I can’t remember how many) copies have their sleeves be actual ORIGINAL etchings,” she says. “That’s actually what the cover art is taken from, the first etching I ever made. I think I was able to make 5 of those. My mom has one, I’m not sure where the others are…Maybe it was less than 5.”

She spoke of the handmade nature of Freshman Year with The Key back in January for her High Key Portrait Series profile:

I put out Freshman Year myself, I called the label Blue Moose. I hand made all the sleeves, I cut them up and glued them myself. So if you have the original Freshman Year CD with the cover – I mean, I don’t know if people were bootlegging that stuff — but it’s all hand-glued and hand-made by yours truly, and it probably took forever to get to you too, and I apologize. I painted everybody’s envelope that I mailed the CDs to, so they were so late, but they didn’t care, they didn’t know they were getting a painting. Made with love!

In January, Quinlan released Likewise, the first solo record under her own name, and though her tour in support of it got cancelled due to COVID, she’s remained active throughout quarantine with her visual art, and just had one of her paintings adapted into a rug (!) for the WOVEN group show in Santa Ana, California. Listen to her conversation with World Cafe’s Raina Douris here, and listen to more songs and Freshman Year below.