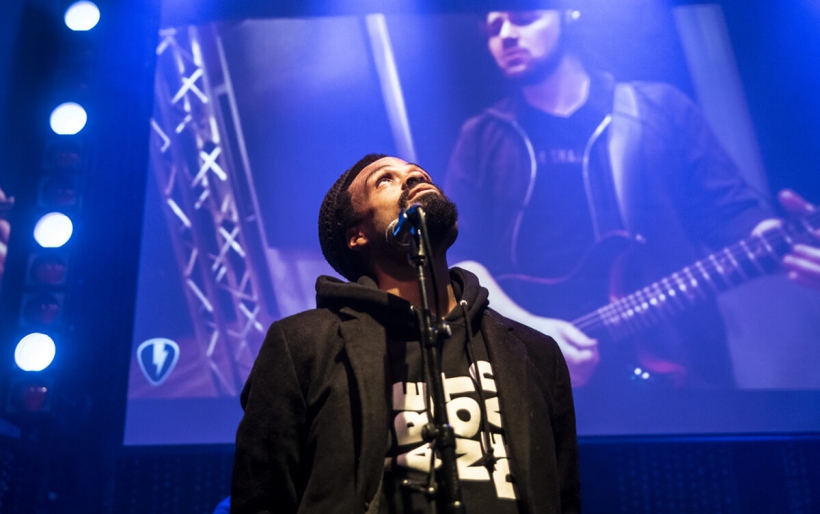 VOYAGE-19 was written and tracked over the course of 54 hours between August 7th to August 9th of this year. Bilal, along with producer Tariq Khan and 30 contributing artists in 30 different locations, remotely collaborated to piece together a cycle of three songs, with the whole process documented via livestream. Released last Friday, the completed project presents one song for each day of the sessions; each song also represents a step along the journey through a very strange year.

That feeling of a journey is palpably conveyed in the concluding track, “Voyage To A New World,” streaming via Bandcamp.

It opens with Badu reciting a poem (“Wake up. You see that ship ahead? Just walk, don’t run.”) and glides to an experimentally structured piece that opens on a space music synth tapestry, and switches moods with a bass drop to a series of different tones and textures, ultimately landing on a surreal groove reminiscent of Radiohead and Sun Ra, and guided by Melanie Charles’ flute, BigYuki and Glasper’s keyboards, and a choir of voices featuring Madison McFerrin, YahZarah, and Bilal himself.

The words paint a picture of a crowd of people, troubled and in motion — there are differences among their backgrounds, differences in their response to their collective experience, but they are moving in the same direction, and Bilal’s concluding verse views it through a Marvin Gaye-esque lens of cautious optimism.

“In the new world, we’ll make a better day. / no stress, no more wars going, no more hate politics. / I’ll be waiting for the day.”

Of the project as a whole, Bilal’s team at HighBreed Music writes on Bandcamp:

Bilal masterfully guided the experience as musical director, producer, and vocalist, showcasing the fascinating progression of an initial idea to a finished album. The artists came together in a virtual green room that recreated the atmosphere of a studio session. They reminisced, laughed, wrote, recorded, produced, and mixed a brand new song each day. Viewers enjoyed rare access to the traditionally private world of song creation and album production – for free. They were also able to observe as Angelbert Metoyer created artwork for the EP – while the music was being recorded.

Listen to “Voyage to a New World” below and purchase the entire project here. Fans can make additional donations via Payolee, with money being split between the project’s contributing artists.