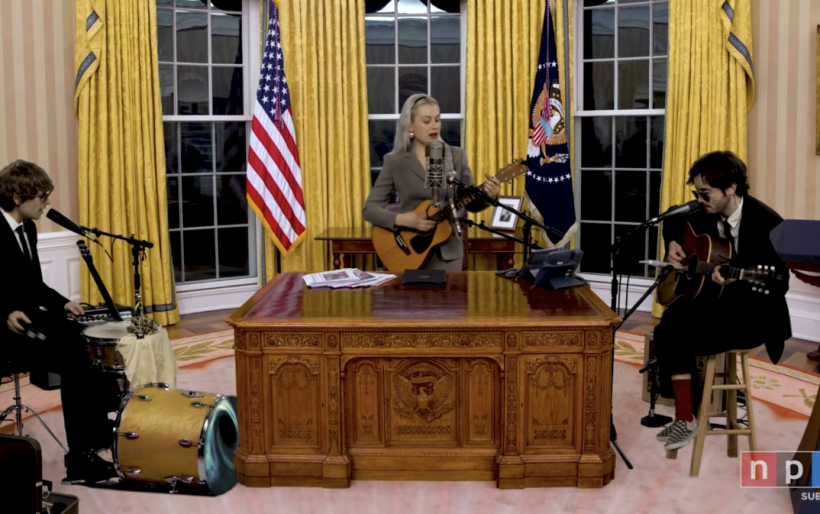 Phoebe Bridgers has made an appearance on NPR’s Tiny Desk, home edition, but instead of playing to home, she chose to play her set in the White House. Bridgers is joined by bandmates Marshall Vore and Harrison Whitford in the mock Oval Office where they perform three tracks from her latest album, Punisher.

The set opens up with the album’s lead single, “Kyoto” one of the more upbeat songs featured on Punisher, where Bridgers sings of exploring Japan and thinking about estranged family. The upbeat tempo sticks out from the rest of her discography, but the gloomy lyrics follow suit. On the next track, “Moon Song”, Bridgers plays a soft and somber ballad with references to John Lennon. She described it in her recent performance for Visible’s Red Rocks Unpaused as “a love song for someone who hates themselves.”

Bridgers’ late introduction, “I hope everybody is enjoying their apocalypse,” introduces the chaos that is about to ensue of the performance’s dystopic closing track, “I Know The End.” The track’s outro cues them to make the trade for their electric instruments, while the backdrop collapses into a green screen. Bridgers’ signature finale screams are made a crescendo by a joined choir of bandmates and fans.

Bridgers has been at the Tiny Desk several times and in different fashions. Her 2017 performance marked her Tiny Desk debut following the release of her freshman LP Stranger In The Alps. She soon returned with Lucy Dacus and Julien Baker to perform as their indie-rock trio, boygenius, and made another appearance six months later with Better Oblivion Community Centercollaborator and Bright Eyes member, Connor Oberst.

Watch Phoebe Bridgers’ Tiny Desk (home) Concert below. Bridgers also teamed up recently with Arlo Parks for a cover of Radiohead’s “Fake Plastic Trees,” which you can listen to here.