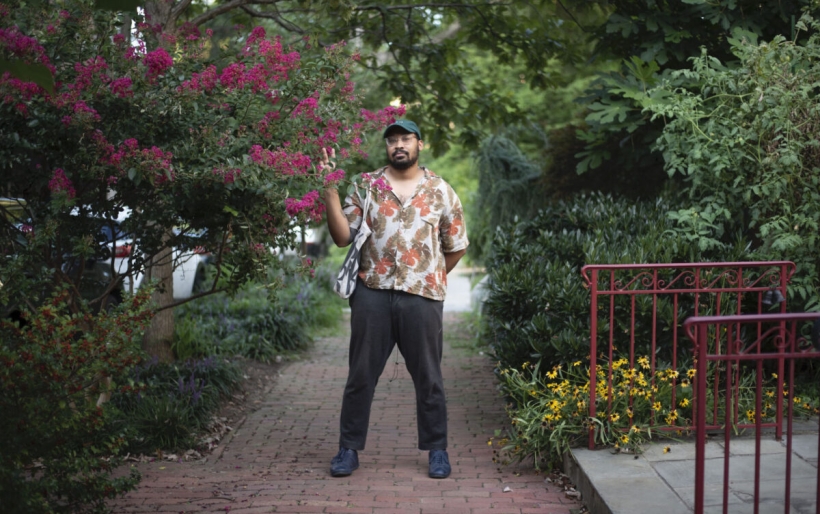 Bartees Strange released a new single and music video, “Kelly Rowland” the latest track off his forthcoming debut album Live Forever, out October 2, and an exciting sneak peek of the record.

Following the release of the album’s first two singles, “Mustang” and “Boomer,” Bartees Strange displays his talent for blurring the lines of genre, and not boxing himself in one sound. The new track features a catchy guitar loop, with Bartees’ voice adding a trippy element. The accompanying video is very fitting for the song, showing him in front of a dark backdrop, with visuals of white beams outlining his movements. Like his sound, Bartees confidently owns the space he is taking up in the video’s performance.

This genre-blending is influenced by being born in Ipswich, England, raised in Oklahoma, and based on the east coast of the United States. Live Forever is a culmination of his experience growing up, and a testament to finding himself through the different environments he was built from. Being raised between church choirs, country music, and having a strong background in formal voice training, Bartees Strange’s sound comes in his own DIY fashion, drawing on elements of indie-rock, rap, and house music. He also adds his touch as a producer, which can be heard on “Kelly Rowland” with samplings of “Mashita” by Mansur Brown and “Dilemma” by Nelly and Kelly Rowland.

On his last project, Say Goodbye to Pretty Boy, Strange reimagined a handful of songs by The National; he loves their music, but upon attending a DC show, was struck by the whiteness of their fan base, and being one of the only Black folks in attendance. The project is his way of exploring the question “why aren’t there any Black bands like The National?” and responding to the struggles that Black artists face making indie rock and punk.

Bartees’ persistence to exist in musical spaces without limitations is a display of his talent and unique sound, tied together by his past and inspirations.  According to the press release, “Kelly Rowland” is influenced by “#Blackexellence” and has him “opening up about exactly what it is that he wants out of this life––everything.”

Listen to “Kelly Rowland” here and watch the video below. Live Forever is available October 2.