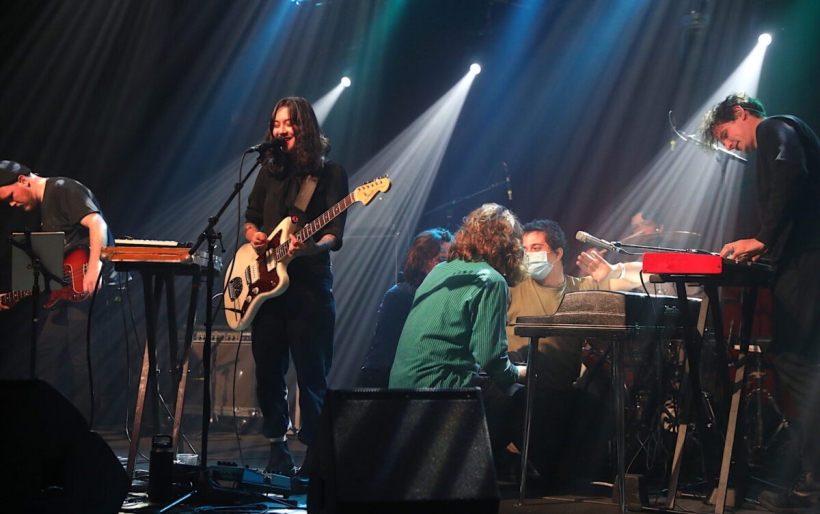 Japanese Breakfast and The Districts | photo by John Vettese for WXPN

Japanese Breakfast, The Districts, Zeek Burse, and Arnetta Johnson make a strong case for the “new normal” of live music at Philly Music Fest night one

If there was a common thread coming from the artists at night one of Philly Music Fest, it was how great it felt to be on stage again.

The Districts‘ Rob Grote marveled that it was the first proper show the band had played since March, and laughed about how strangely satisfying a small crowd of socially distanced fans — plus an enthusiastic Zoom grid of remote viewers — could be.

“This is so wonderful, thank you so much,” said Japanese Breakfast‘s Michelle Zauner during their headlining set. “It’s so good to feel like you have a purpose.”

The opening night of this year’s virtual edition of Philly Music Fest combined their performances, broadcast live from the Ardmore Music Hall stage last night, with prerecorded sets by Arnetta Johnson and Zeek Burse, taped live earlier in the week.

A Camden, New Jersey trumpeter and band leader who has toured in Beyonce’s band, Johnson got the night started with a 20-minute set of expansive, entrancing jams like the trap-flavored “Pull Up On Em” and the intricate, intense “Take Me To IsReal.” They will play a longer set tonight for night two of Philly Music Fest.

The Districts took the stage to “My Only Ghost” from their new album You Know I’m Not Going Anywhere, one that Grote noted was released on Friday the 13th of March. They haven’t played in front of an audience since, but they have not lost their touch, delivering a cathartic set that showcased their two most recent records — “Salt” and “Fat Kiddo” from Popular Manipulations were stunning, while You Know had the room shaking with a burning “Hey Jo” and the raucous groove of the Joy Division-flavored “Cheap Regrets.”

Grote and Pat Cassidy traded fierce guitar solos throughout the set, the rhythm section of Braden Lawrence on drums and Connor Jacobus on bass kept the energy driving, and keyboardist Breshon Martzell added warm, atmospheric flourishes to the performance. Between songs, Grote shouted out friends he spotted in the Zoom audience, like Philly engineer and producer Josh Pannepacker, who worked with the band on their new album.

A rock and soul crooner with style and charisma, Zeek Burse used his time at Philly Music Festival to showcase his breathtaking new single “The Room,” dip back to the Southern-flavored funk of “Dry” from his debut album XXII, and cover classics like Bob Marley’s “Is This Love.” He also used the platform to speak out, quoting Nina Simone by saying “An artist’s duty, as far as I’m concerned, is to reflect the times,” and launching into his song “Black Lives Matter” a fired-up anthem decrying racial injustice and police violence.

Festival founder and curator Greg Seltzer spoke before the headlining set, telling the crowd in the building as well as viewers at home that Philly Music Fest’s mission is entertainment, but more importantly, it’s education. He cited budget cuts removing music and arts from Philly schools, and said that the festival — although it was streaming for free — was taking donations for a variety music ed nonprofits, such as Rock to the Future and LiveConnections, as well as the micro-grant artist relief fund PMF launched post-COVID. Donations are still being accepted and can be made here.

Closing the night was a stunning set by Japanese Breakfast, and Zauner told the crowd that it was their first — and probably last — performance of 2020. Like The Districts, you’d never guess it, their performance was so tight. Zauner noted that The Districts are actually rehearsal space-mates with her band; “It was cool to hear them through the walls, practicing for this same show.” The usual JBrekkie lineup of Peter Bradley on guitar and keys, Deven Craige on bass, and Craig Hendrix on drums was augmented by violinist Molly Germer, who lent beautiful leads to moments like “In Heaven” and “Boyish.”

The band used the set to debut two new songs which find them exploring the more classic pop corners of Zauner’s songwriting hinted at in “Boyish.” She’d previously played “Kokomo, Indiana” on a solo livestream from her and Bradley’s Brooklyn apartment, and hearing the song built up with the band for the first time, it channeled the graceful bittersweet pop of Belle and Sebastian records and Wes Anderson soundtracks. She described it as a story from the perspective of a 17-year-old boy from the midwest whose partner travels to Austria for school. “That, to me, is the apex of feeling.”

Another slow-groove new song called “Tactics” was played on a Wurlitzer borrowed from Nick Krill of The Spinto Band and Teen Men, as was a smoky, countrified reinvention of “Ballad 0” from her quarantine electropop project Bumper, with Hendrix singing a counterpoint verse. Zauner described it as her take on getting both perspectives in Kenny Rogers’ “Ruby, Don’t Take Your Love To Town.” “Nobody seemed to care when I talked about it on the internet,” she joked. “The algorithm doesn’t like Kenny Rogers.”

Zauner had a lot to say in general during the set; before a heartrending performance of “Till Death,” she told the crowd Craige is getting married this weekend, congratulated him, and talked about how having a partner by your side during these pandemic times is a blessing. Later, she spoke out in support of Black Lives Matter and defunding the police, calling this week’s grand jury decision in Breonna Taylor’s murder “disgusting” and encouraging fans to vote in November. The night ended with “a couple spicy covers” — Tears For Fears’ “Head Over Heels” featured Grote, Lawrence, and Cassidy of The Districts rushing the stage in masks to sing the “na na-na na na” outro, while a revved-up, very fun rendition of “Taste Of Ink” by The Used closed out the show on a high note.

It’s tough to say if this will be the new normal as far as concerts go — Ardmore Music Hall does have a handful of socially distanced / livestream combo gigs beginning to pop up on their calendar — and while it’s certainly not ideal, it also felt incredible to be watching a concert, up (relatively) close for the first time since the winter. Chatting with XPN’s Julian Booker after the show, he summed it up tremendously well: though the lo-fi livingroom livestreams we’ve all been tuning into these past six months have been a lifesafer, there’s nothing that can compare with a band playing onstage together, through a sound system, getting lost in their music and taking us with them.

Philly Music Fest continues tonight at 7 p.m. with Arthur Thomas and the Funkitorium, Clap Your Hands Say Yeah, Mt. Joy, Arnetta Johnson and SUNNY, and Langhorne Slim. Watch the show live via NPR Live Sessions, or listen to it broadcast on WXPN.

Below, watch video of Night One, and check out photos from the show.