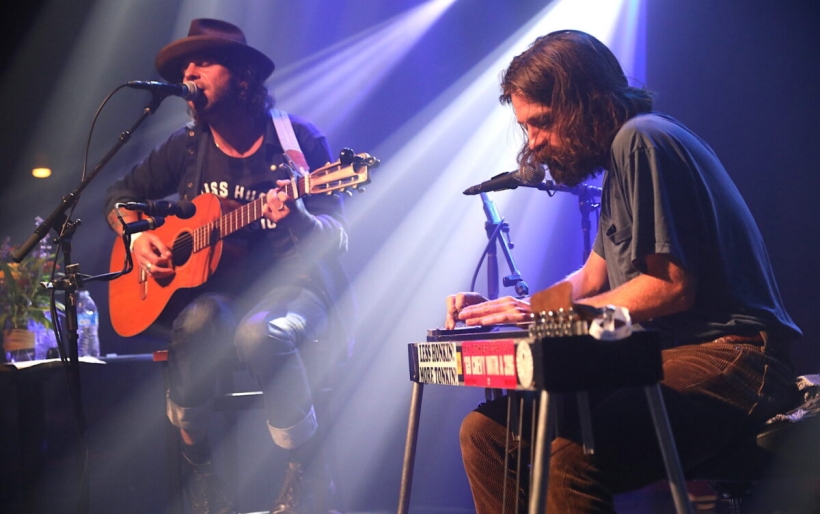 More bands in the mix, more time on stage, more music education nonprofits from the Philly community given space to talk about what they do. Between sets, the virtual audience — as well as the dozen or so people inside Ardmore Music Hall — got to hear from Musicopia Drum Line, Girls Rock Philly, Settlement Music School, and Play On Philly, organizations that will be recipients of the money PMF is raising during this year’s festival. (Founder Greg Seltzer told those watching that the first night alone raised $14,000.)

Getting the night started was high-energy six-piece outfit Arthur Thomas and the Funkitorium, who are PMF returnees after playing the festival last year. They were full of high-energy riffs, dance moves, and lore about journeying to the planet Funktar. The band has spent the past year getting its debut album ready, and previewed some of its songs during their set — after one particularly dreamy one, vocalist Re-Mus gave a dedication and shoutout to Bill Withers and told the crowd “we literally recorded that on the day transitioned.” The spacey / lively energy was bookended by the rousing “Brown Skin Betty” at the top of the set and the social justice-themed “Fried Chicken” on the other side, making for a wide-reaching trip into the funkosphere.

A new trio configuration of art-pop favorites Clap Your Hands Say Yeah kept the vibe of the night in cosmic orbit. The band, which finds longtime songwriter and frontperson Alec Ounsworth joined by Todd Erk on bass and Jonas Osterele on drums, balances its energies between dreamy synthesizer-dipped psychedelia and solid pop melodies. Ounsworth was reserved for the first couple songs, taking the first break to acknowledge “We’re a bit nervous…I’m nervous anyway. This is our first show in a long time and it’s weird to come out of the cave.” The warm reception in the building, as well as from fans on the Zoom grid, had Ounsworth and his bandmates loosening up and stretching out across a dynamic range — the solo piano emotion of “Ambulance Chaser” from 2017’s The Tourist sitting beautifully alongside the jangley “Misspent Youth” from 2011’s Hysterical.

Trumpeter Arnetta Johnson and SUNNY returned for a second night in the mix, reprising some highlights from night one (“Take Me To IsReal” was just as good the second time around) while also diving into the swaying drum machine vibe-out “I’m Just Sayin” and a Bill Withers tribute of their own to close their set. “I got a question for y’all in these virtual streets,” said Johnson. “Do we have any Bill Withers fans in the house?” She led each of her bandmates into the song, adding one part at a time — a kick drum, a bass line, a horn melody — until it was clear that they were doing a massive rendition of “Lovely Day.”

The final Withers send-up of the festival came from Mt. Joy, who covered “Ain’t No Sunshine” mashed into the hook from Gorillaz’ “Clint Eastwood.” The Los Angeles folk rock band talked up co-frontpersons Matt Quinn and Sam Cooper’s Pennsylvania roots on their intro to the song “Cardinal,” saying how it’s about “hanging out in the Jetro Lot outside Lincoln Financial Field with a bunch of weirdos who are my best friends to this day.” As Quinn told viewers, those Eagles tailgate hangs were something special: “We’ve traveled all over, but there’s something that brings me back to people from Philadelphia. I think it’s collectively a different type of person that comes from here.” The lyrics put a finer point on what Quinn might have meant by that, underscoring individuality: “All of my favorite people, they don’t march to the beat of your drum / They just keep on keeping on.”

The Nashville-based, Bucks County-born Langhorne Slim closed the show with a set composed largely of new material. “All of these songs are about Council Rock,” he joked. “If we make it through last song, we’ll do ‘Neshaminy Middle School Blues.'” In all seriousness, Slim’s new selections were rooted in trauma; this winter, Nashville was devastated by a tornado, Slim said, and then the world was turned upside down two weeks later by COVID. As such, the new music addressed themes of displacement, mental health, and hope for a better world, and Slim played them wearing a t-shirt reading “Missing Hugs and Live Music” and accompanied by Matt Davidson of the band Twain. When he wasn’t singing, Slim was interacting with fans on the Zoom grid, taking requests from some, joking irreverently with others, and wishing one engaged couple a happy wedding (their first dance song will be his duet with Jill Andrews, “Sea of Love”).

In his closing remarks, Seltzer talked again about the importance of music education, but also about the disparate elements of the music community coming together. He pointed to the mix of artists on the bill over two days, the venue hosting the gig, the radio broadcast on WXPN. “Maybe what we’re trying to do is bring all these parts together,” Seltzer said. “We have the bands, we have the venues, we have the radio station, maybe we’re just functioning as a coalescing force.”

Watch video of Philly Music Fest night two, and check out a gallery of photos down below. Donations for PMF’s beneficiaries still being taken at PhillyMusicFest.com.