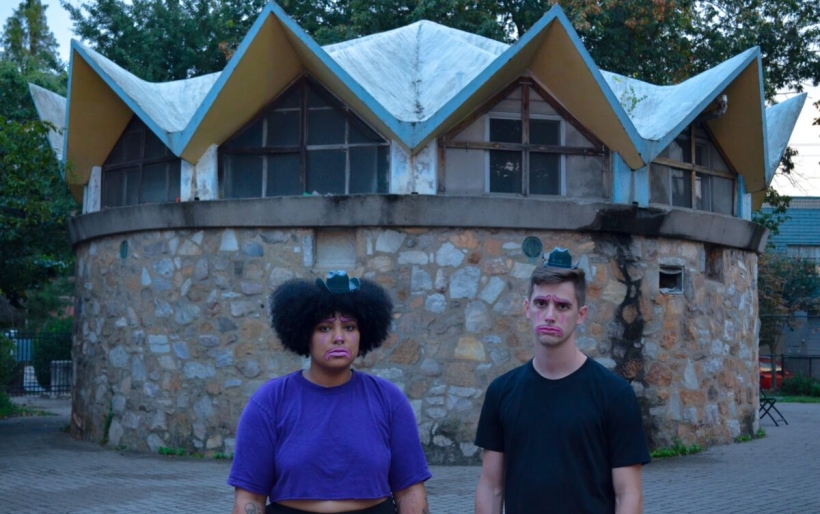 Gab Landrum and Matt McMenamin are long time witnesses of one another’s musical journey, dating back to elementary school where they played across from one another in their school’s band. Their extensive creative backgrounds stem from the same arts-oriented school, where picking up an instrument was encouraged.

Gab was on the upright bass, and like many kids who are made to do activities they may not want to do, Matt pretended to play the violin, something the two still joke about. Since then, they have come far in their careers, where each has pursued solo acts and ventured in other creative mediums. On their own, Matt produces and mixes for a variety of acts in Philly under the name Dirt Bird Music, and Gab pens and performs original tracks at open mics around the city. The duo eventually decided to work together again under the band name Lenny and Carl, where they definitely don’t pretend to play any of their instruments.

Launched in 2019, Lenny and Carl boasts a diverse repertoire of tracks, from their Snail Mail inspired debut single “Cute” to their 2019 rock-pop project Not Dead (Yet). With their eclectic range of sounds and visuals, it doesn’t come by surprise that they come from creative roots, and together with their different skills and evident chemistry, they make for an exciting and idiosyncratic act. Gab and Matt spoke over email about Lenny and Carl’s origins and sound, their creativity before and during the pandemic, and what’s to come.

The Key: How would you describe Lenny and Carl, and how did you get started with the project?

Gab Landrum: We are two very old friends who love music, comedy and pop culture. We’ve been friends for over 15 years, so we’ve been doing goofy music stuff together since we were kids. Lenny and Carl started when I was performing original songs at open mics around the city in 2018. Matt started going with me for emotional support. Then we got the idea to start performing covers together. Eventually, we put together a full band act of my first album Really Nice Break Up Songs which is under my full name. Matt played drums and I played uke and sang. I ended up liking the vibe of the full band, so I put my solo stuff on hold and we started focusing on Lenny and Carl.

TK: What are your creative backgrounds?

GL: We went to a school that was very pro-arts education early on. In middle school, we would make a recording studio in whoever’s parents’ house we were hanging out in, shuddering at the fact that we stacked up all their pillows and couch cushions along bathroom walls to soundproof them. We did whatever we could think of that would make each other laugh. The first CD my friends ever put out was a gift for my 16th birthday. It was mostly rap that no soul on this earth is ever allowed to hear again. We also played covers with our friends at coffee houses and talent shows in high school.

I went to West Chester for Middle School Education and graduated with a degree in professional studies. Matt went to Temple for Audio Production and recently graduated with his Masters in Television Management from Drexel. We are both currently freelance / gig workers. Matt mixes and produces music for a variety of independent artists. I am taking a hiatus from my full time gig tattooing due to the pandemic, but I have been designing and creating art by commission, and have been holding art raffles to raise funds for local mutual aid organizations and individuals impacted by the pandemic.

TK:You’ve mentioned that you’re still figuring out your sound. Just from listening to your discography, you’ve really established versatility in terms of genre / sound. Gab’s voice is really adaptive to the instrumentals, so on songs like “Cute” there really is that sense of Snail Mail / Soccer Mommy indie-rock sound that inspired the track, and songs like “For Real” Gab’s voice really fits the ukulele / guitar harmony. Do you feel pressured to find a sound or genre?

GL: We both listen to so much different music that we don’t want to get stuck in a particular genre or be held to expectations for sound. It’s too much pressure. We are both pretty anxious people. The indie-rock thing started as a joke when we wrote “Cute.” It was actually a parody inspired by me being in my Snail Mail / Soccer Mommy bag. We didn’t want to get stuck as a parody band, and wanted to focus more on an original sound that really was just a faster, heavier, pumped-up version of the solo stuff I was working on which was originally a very sad boy gang.

TK:Speaking of versatile sound, you’ve definitely covered a variety of artists. I think it’s really cool how you add your unique twist to your covers and definitely make them into your own! Are there any artists that you look to for inspiration when making your music?

GL: We definitely look to inspiration from other artists who don’t take themselves too seriously. Two great examples of that are Thundercat and Tenacious D. Both artists make genuinely great music but they have some funny lyrics, silly videos, and great personalities. As serious as some of our music gets, being goofy and having fun is our overall goal. That’s part of why we love hip-hop so much, there’s a lot of alt-comedy in hip-hop that goes unnoticed.

TK: This may be geared more towards Gab, but what inspiration drives your songwriting process? How do arrangements with vocals and instrumentals typically come together?

GL: The first album of originals was made using a similar process as my solo album. I usually am terribly sad when I write. I trap myself in a room with my ukulele, playing different chords and singing whatever comes to mind. Sometimes I think of melodies and instrumentals separately and record them in voice memos on my phone as they come to me. Later I’ll puzzle piece lyrics together from notes on my phone. However, sometimes a song will come together all at once. If I say or think of something and I think, damn I should write that down. I write it down. A good amount of it can be turned into a joke or a song. A joke song if I’m lucky.

Recently we’ve been making a lot of our music in the same way that rap is made. For instance in “So Long,” a song we released under our solo names, and in “Don’t Talk About Fight Club” Matt made the instrumentals and sent them to me. I listened to them and came up with melodies, harmonies, and lyrics. We pass it back and forth until it sounds good to both of us. It’s been working for us.

TK: I am really curious about the video for your new song “Don’t Talk About Fight Club.” Did anything in particular inspire the visual elements of the video?

GL: At first, we were going to let Julia Zipporah have free reign over the visual but we wanted to try and give her some direction. We both love comics and Adult Swim style cartoons. So, we asked her to make it look like our brains were oozing out of our noses eventually resulting in our untimely deaths. For a song about fighting, it’s pretty fun!

TK:You also mentioned “Don’t Talk About Fight Club” is your first release done remotely. How has it been making music under these new pandemic circumstances, along with our current political climate?

GL: We’re angry, we’re sad, we’re depressed. We miss each other a lot, but thankfully we have a lot more time to make music our priority since we’ve been formally unemployed. We have turned our isolation into an opportunity to create more but unfortunately, we also have a lot of time to overthink and doubt ourselves.

Luckily, I have been able to learn the basics of Logic so I can record vocal tracks and send them to Matt. I’ve only cried a few times in the process. It’s hard! But we’re really thankful that we have a creative outlet to express ourselves. Especially when the state of the world is so violent and unpredictable.

TK: What are your plans for the rest of the year?

GL Help each other survive and hopefully be able to fight through our depression long enough to finish our new EP. Just Kidding will be out by the end of the year but in the meantime you can follow us on Instagram and Twitter, listen to our music wherever you stream and if you’d like to support us more you can purchase our music directly from our Bandcamp.