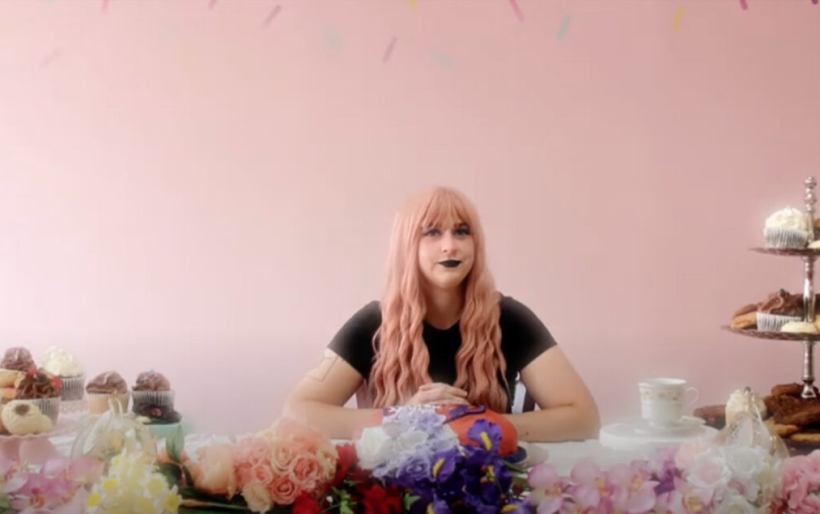 It has been quite a *checks notes* six months, three weeks, and four days since the Coronavirus pandemic changed life as we know it. With all that’s happened since the winter, various totems of the before times and the new times crop up in the new music video from Philly rockers Riverby.

Guitarist Tyler Asay rocks out on a bright yellow Les Paul, wearing a Local Smokes t-shirt, and sitting in front of a frozen-in-time “March 2020” whiteboard in an empty day care center. Drummer Dan Nazario warms up on cookware, clad in a black t-shirt with a photograph of the Municipal Services Building taken after the June removal of its controversial statue of Frank Rizzo (the former Philly mayor whose “tough on crime” tenure in the 70s targeted Black citizens and stoked racial tensions). Bassist Doug Keller is on a toilet, playing riffs and wearing a WXPN cap — and yes, XPN has been one of the places you’ve been able to hear Riverby on the radio since their debut Smart Mouth was released in July.

At the center of the video is frontperson Sophia Greenberg, who sits before a decadent spread at Manayunk’s Terrace Street Bakery, where they’ve worked during the pandemic. As the tensions of the song escalate, Greenberg tears into the pastries around them, and as sugar and blood become indistinguishable — a fine visual metaphor for the song’s snarling pop aesthetic — we bounce back and forth between a surreal basement show played for stuffed animals.

Suffice it to say, the imagery and detail in the Zoe Heller-directed video is striking, and very intentional. Greenberg calls the video “a step into absurdity” and goes on to explain their vision:

“The video starts out soft and glowing, a band taking turns in what looks to be an uncomfortable performance in front of people who aren’t really there — a metaphor for the livestreams and artificial shows bands must now partake in to achieve any source of relevance. It slowly builds into a swell of chaos — what starts off as an innocent tarot reading becomes almost sinister as the last card, Death, is pulled. It stands for change, rebirth. The narrator finds themselves elbow deep in a cake symbolizing their own accomplishment. They are destroying it to make way for something new. The video is a testament to abrupt change, jarring transitions, and is an ode to how to have your cake and eat it too.”

Watch the video below. Smart Mouth is out now via Boston indie label Take This To Heart records, and 100% of album profit will donated to bail funds throughout the country via ActBlue; download your copy here, and read Riverby’s interview with our Sean Fennell here.