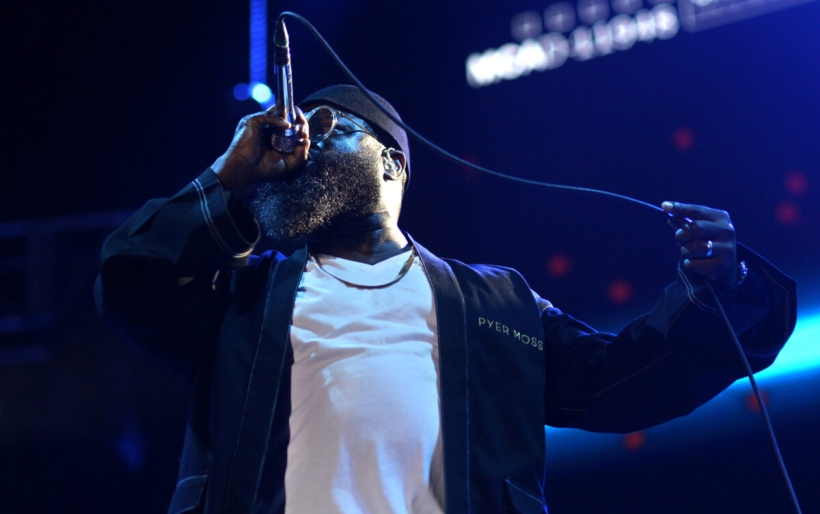 The Roots | photo by Ben Wong for WXPN | brotherlylost.com

When Black Thought launched the first installment of his Streams Of Thought series, the anticipation for a solo release from The Roots’ frontman was palpable. 20 years ago, Black Thought had flirted with the idea of releasing a solo record. In 2000, the MCA label released the single “Hardware”, a dark and dramatic cut produced by Japanese Hip Hop pioneer DJ Krush. “Hardware” was billed on the jacket as “the first joint from the debut solo album Masterpiece Theater.” Years passed and the album never saw the light of day. The Roots continued on building their status as one of rap’s few active legacy acts and Black Thought continued on, with his show-stealing guest slots cementing his reputation as an elite lyricist.

When Streams Of Thought Vol. 1 arrived in June of 2018, the excitement around Black Thought’s skill as an MC had reached a fever pitch. Six months prior, in December, Thought unleashed a furious 10-minute, 2000+ word freestyle on Funk Flex’s radio show. A dizzying waterfall of wordcraft, the performance went viral. The manner in which Thought combined slick literary references, elegant boasts, vivid imagery seemingly pulled from some noir-ish crime saga, and insightful nuggets of wisdom was a shock to listeners who weren’t already familiar with his work.  With production helmed by 9th Wonder and Khrysis, Streams Of Thought Vol. 1 was a taut and brutal exercise in lyrical homicide. The album was met with near-universal praise, but more importantly, Black Thought had finally stepped out from the ranks of his band and delivered a solo project worthy of one of the mightiest pens in rap.

Following the ambitious and ornate Vol. 2 (produced by Salaam Remi), Black Thought returns with Streams Of Thought Vol. 3, a collaboration with veteran producer Sean C (Jay Z, Ghostface, Diddy, etc.) As with the previous installments, Black Thought’s dizzyingly virtuosic approach to rhyming is the main attraction here. More so than ever before, he uses that skill to draw us in as he experiments with new sounds and digs deeper into personal introspection and politics. The album opens with “I’m Not Crazy (First Contact)”. Over a somber piano-motif, we hear the voice of Indigenous American author and activist John Trudell telling the story of the first contact between Columbus and the indigenous people of this hemisphere.

As Trudell speaks, Black Thought enters with his voice booming and pitched down deeply. Taking us 528 years into the future and delivering vivid bars and bringing us up to speed on the state of the world ravaged by the Capitalism and white supremacy that Columbus (and by extension, Europe) brought to every other continent on the planet.

“They say the world keep turning. California is burning. Who reignited the thirst for knowledge over the learning? Oh wise and powerful, black scholar holding a sermon. The Gods is proud of you with your sword raised in a turban.”

The album fully kicks into gear with “State Prisoner.” Sean C’s instrumental melds a wailing choir with gut-punching drums that serve as a backdrop for Black Thought’s fiery, revolutionary images to be intertwined with self-aggrandizing battle rhymes. The overall end product is more of an effect, an auditory pummeling by way of word and sound than any easily identifiable narrative. “Magnificent” is a bubbling, midtempo cut that finds Thought exploring his own personal failings and vulnerabilities. Riding a seemingly endless highway of internally-rhymed couplets, Black Thought constructs freely associating pieces of violent and ecstatic imagery.

“I hurt myself to see if I could feel. Then I began to pray to see if God was real. I said, ‘All-Seeing, reveal to me that which is concealed.’ Something told me that I probably shouldn’t be behind the wheel of that Bonneville. I was still feeling kinda ill, not a dollar bill. Time to kill. Tryna sign a deal. Ten years before State Prop was Roc la Famille, I was popping pills, unaware that steel sharpens steel.”

A few cuts that arrive toward the middle of the album find Black Thought exploring traditional song structure while stretching the album’s sonic palette. “Nature Of The Beast” is a dreamy, New Wave pop song made in collaboration with Wasilla, Alaska modern rock act Portugal, the Man. that highlights Black Thought’s singing voice. Meanwhile “Quiet” feels like Sign of the Times-era Prince with a heavy breakbeat.

With vicious guest verses from Killer Mike, Pusha T, Schoolboy Q (on the fantastically manic “Steak um”) the album is primarily a vehicle for the art of MCing in and of itself, and The music is mostly designed to serve that aim. It goes without saying that Black Thought has spent decades working at his craft, as he has developed a level of sheer technical prowess and expressive power that is essentially without peer. While these songs do attack the problems of the world with righteous indignation, while addressing the challenges of the soul with careful self-inspection. But more than anything, Streams Of Thought Vol. 3 is a showcase for Black Thought as a wordsmith of awe-inspiring force and complexity.