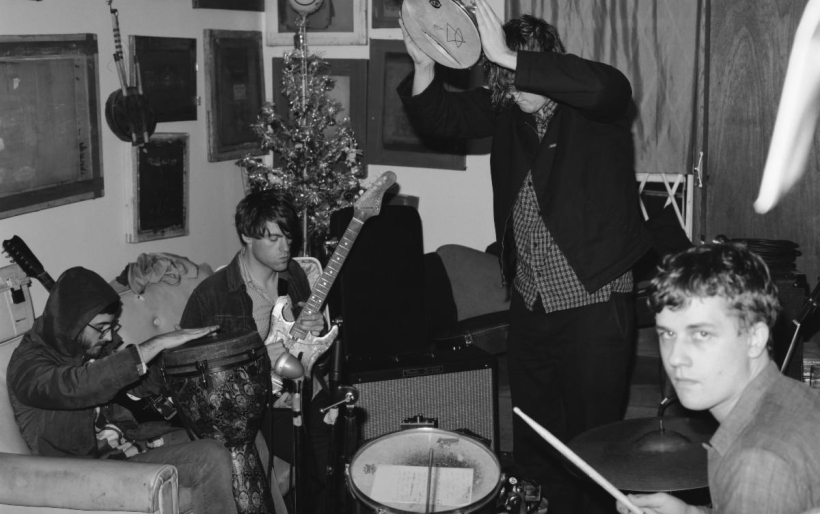 Woods | photo by Nicholas Haggard | courtesy of the artist

Brooklyn-based folk rock band Woods recently released their second record of 2020, titled Reflections Vol. 1 (Bumble Bee Crown King), on October 2nd via Woodsist. Their first record of 2020, Strange to Explain, was released in May to critical acclaim. Reflections Vol. 1 is made up from archival material, originally recorded from 2009-2013, and touched up earlier this year, in August. “Our hope is that it plays like a ‘lost record’ from an extremely strange and fruitful period in Woods history,” the band said, referring to the series of albums they released after receiving the coveted “Best New Music” designation from Pitchfork for 2009’s Songs of Shame.

Each of the eight tracks on Reflections Vol. 1 also comes with a detailed description of where, when, and why the track was recorded. The album opener/title track, “Bumble Bee Crown King,” is based off a sign the band passed by on an Arizona highway following a tour performance. After pulling off the highway, Woods “set up drums and a battery powered amp and began to bang away.” The jam session resulted in the eight minute track. “Driving in the desert for so long can have a crazy affect on you. It’s both inspiring and anxiety producing,” they continue.

The other songs were recorded in various locations around the US, some after concerts, some with collaborators, and some as a result of just messing around in the studio. Regardless of the circumstances, Reflections Vol. 1 (Bumble Bee Crown King) is a great collection of remastered b-sides. Listen to Woods’ Reflections Vol. 1 (Bumble Bee Crown King)here.