Document Everything: Yankee Bluff on shaping sound and making time stop with Everybody Hits! - WXPN | Vinyl At Heart 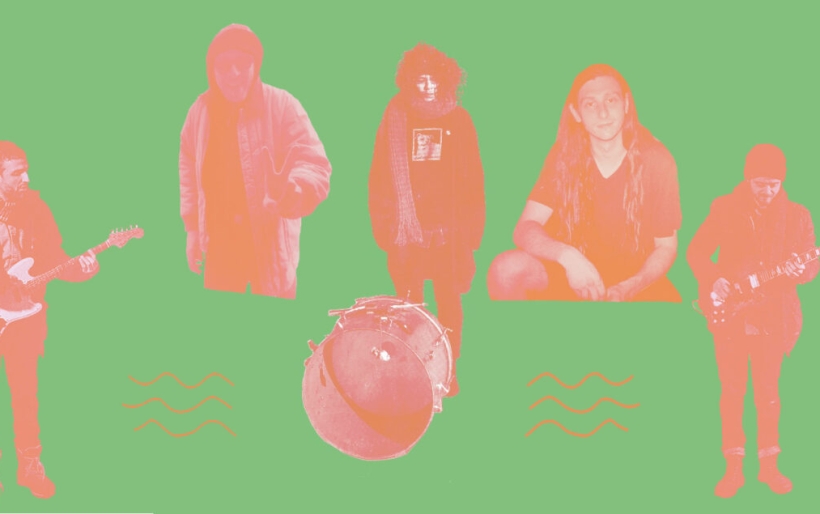 Document Everything: Yankee Bluff on shaping sound and making time stop with Everybody Hits!

Endings don’t always have to be maudlin swan songs of nostalgia. Sometimes they can simply be what they always were; laid back, raucous, and abundantly fun. The new record from Yankee Bluff, Everybody Hits! (out now via Lame-O Records), says bye to a lot of things, their time in Philadelphia, Kensington’s Everybody Hits! DIY venue, and an era of collaboration and hangouts. But it is, more than anything, about living in the moment you’re in.

Nate Dionne and Peter Helmis utilize their combined 26 years of Philly DIY experience to assemble a murderer’s row of a line-up; Michael Cantor of The Goodbye Party, Melissa Brain and Gabby Eisenhower of Marge, Doe’s Nicola Leel, Big Nothing’s Pat Graham, Nick Tazza from Algernon Cadwaller, and The Spirit Of The Beehive’s Pat Conaboy just to name a few. The result is a 19-song lo-fi indie-rock breeze of a record, with the sticky-floor choruses, ear-busting breakdowns, and cheap-beer spray of its perpetually welcoming namesake.

I recently talked with Nate and Peter about, among other things, recording at Everybody Hits!, their differing songwriting styles, and creation via necessity. This interview has been edited and condensed for clarity.

The Key: Obviously right now we are living in a precarious time for all music venues, but it was still especially tough to lose Everybody Hits! when we did. What is your personal connection to the venue?

Peter Helmis: Well, a bunch of us lived at Big Mama’s Warehouse, which was around the corner. We moved in there around 2008 and, at the time, Everybody Hits! was a dented appliance store, which is not that exciting but it was still a cool building to walk around in and think how much it sucked that such a cool building was just a dented appliance store. Then after a few years of living in that neighborhood, Dave Gavigan rented it out and turned it into a batting cage, which was the last thing we ever expected to be there.

It didn’t take too long for someone in our house to ask if we could do a show in the building, cause that’s pretty much how things go. Anytime there’s a space, someone will be like, let’s do a show here. Dave barely had to think about, he just said yeah, that’d be awesome. So from then on we had a connection with Dave. He wanted to start doing more and more shows and it became as much of a venue as a batting cage.

TK: How did this connection eventually lead to this record, aptly titled Everybody Hits!?

PH: A couple years into that, Nate and I, in our constant struggle to find practice space — because for some reason that’s the hardest thing to do in Philadelphia — approached Dave about building a practice space in his basement. So we gave him some extra rent money and we had a place to go play 24 hours a day. It was like that for 2 or 3 years. We were just down there all the time in the basement making noise. Then when this record came around, we decided to do it upstairs in the main room where all the shows happened, you know, where all the energy is, where that sound is. We just did it after hours when they were closed and in the winter months when there was more time. It was awesome, we just had Everybody  Hits! as our own personal recording studio.

TK: You describe the project as, “lo-fi indie”: was this more out of necessity or was there something about the less polished sound you found more endearing?

PH: I think both. We’re both into unique sound recording and stuff like that. One kind of led to the other. Often it was the quickest path to getting down an idea or a feeling and you don’t want to spend too much time setting up mics or anything to record it. The way I look at it, it’ll sound cool and we can use it no matter how it sounds. It’s almost like not caring at all, but a little bit more informed than that. We are more honed-in so we can not care and just kind of record whatever and use whatever comes out of it.

Nate Dionne: For me it just feels more relatable. I haven’t been involved in too many records that don’t sound that way. Especially going through my early twenties and stuff, listening to music recorded with that aesthetic was more relatable and almost told more of a story. Things aren’t necessarily perfect or even good. Some recordings will sound terrible and, I don’t know, I think sometimes I love that about them.

TK: To me, it very much reminds me of those old Guided By Voices records, where perfection was not necessarily the goal and, in turn, added something unique and individual about those records that make them great.

PH: It’s the story behind it. In my decades of listening to music, I have learned to really appreciate a unique sound that makes me appreciate where the artists were and how they made the sound. Then when you actually learn about recordings you find out most of those scenarios where there are especially interesting sounds were created by necessity, like they had to do it in this person’s cabin or it was the last take of the day and they just threw up one room mic or something like that. Once you realize all these accidents are creating the most interesting parts of the thing you are listening to you just kind of get less careful. You shed that sacredness of recording, needing to have everything in the perfect spot and checking everything a bunch of times before tracking. You just learn to use that spontaneity to create more interesting things. You find a way to do the things you appreciate by caring less almost and going more by feel.

PH: Also, at this point, I wanna shout out Dan Angel, who was our recording guru throughout this process. I’ve always appreciated the way Dan records bands in Philadelphia and the more and more I talk to him I recognize it is his spirit about the whole process, just getting you to not overthink everything. He was definitely the guiding light for going all in and doing things the way we were doing them. You don’t want to be chasing this perfect thing up on a pedestal because it’s never going to look as good once you get there.

TK: How did you guys go about splitting songwriting duties on the record?

ND: We both just wrote as many as we could along the way that we liked. We would get together Tuesday and Thursday nights and practice and record and just introduce any songs we had. We had this big master list up on Soundcloud of all that stuff. Pete and I just demoed on our own and then would upload the demos to Soundcloud. Some we used for the basis of the actual recordings and built everything off of those. For the first song on the record, “Valley Song”, all the guitars on that were just scratch guitars I just D.I.-ed into some crappy TASCAM four track, but listening back we realized we could use it.

PH: That’s just another example of how we were more confident just trusting our gut and realizing that it sounded good enough to use in the final version.

TK: The splitting up of songwriting creates this really cool back and forth on the record, how do you feel your styles compliment each other?

PH: I remember the first time I listened to the record finished, front to back, was the first time I noticed that I had all the poppy songs and Nate had all the melancholic songs. I didn’t even pick up on that but that alone is kind of genius, especially when we’re putting them back and forth, you get the big picture.

ND: It’s a good two sides of the coin. A friend of mine pointed that out to me when I showed him the record. “Better For You” came on and I just sound so pathetically sad on that, but in a cool way you know, and that first line came on and he was just like, “oh good, this guys back”. It really is like two voices, which makes for a very organic listen.

TK: I understand you’ve both moved out of Philly since recording this record, did this imbue the album with a kind of swan-song quality at all?

PH: Well, to be honest, it’s not something we really knew at the time. I don’t think Nate even knew he’d be moving when we started this record. Once we started getting down to it we realized Everybody Hits! was closing and we were both moving out of Philly. This record really is a time capsule of our last couple years in Philly and the end of the era for Everybody Hits! and the scene of people that were there every show because it was down the block. That’s why you just have to document everything all the time because even when you can’t see why it’s important, eventually it will be.

TK: How do you think a venue like Everybody Hits! closing effects the DIY community that comes to surround it?

PH: You know, they come and go. You can’t really get too bent out of shape about it. It had a sick run. I can’t think of a DIY venue in Philadelphia that has had a run like that since I first moved here.  When it first popped up it was mind-blowing for a lot of people and just seemed like the best place ever, but they can’t last forever. Hopefully it inspires people to do something like that again. That was a hard place for Dave to run all the time. I know he was tired at the end of it. Even though he was doing really well, it was always a struggle to keep it open. He was actually trying to buy a place when he knew that building was ending and he wasn’t able to because he didn’t have what it takes to actually own property in Philly and that was with investors and everything.

ND: When I found out Everybody Hits! was closing down and the building had been sold, I wasn’t surprised and I also wasn’t very worried. I just know someone else will fill that void because it always seems to happen. I remember before Everybody Hits! when Golden Tea House stopped doing shows, people had a similar reaction. But there will always be something.

PH: When I think about my time in Philly there were a handful of sick venues that existed and they all had their heyday but none of them are around anymore. I trust that is just a natural thing and when the right energy comes around nothing is going to stop that energy from taking whatever it has and turning it into something amazing.

Yankee Bluff’s Everybody Hits! is out now on vinyl and digital via Lame-O Records; order it here.