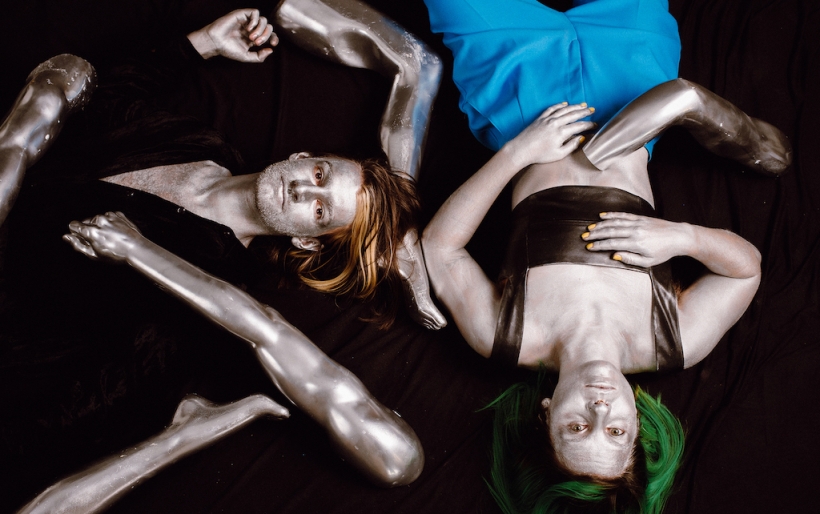 Philly three-piece Ellen Siberian Tiger recently released their latest full-length, Cinderblock Cindy, a powerhouse of self-expression that navigates vulnerable topics in the most intensely authentic way. The nine-track experimental rock LP serves as an impactful expressive tool that unfolds in a multitude of sonic moods.

Cinderblock Cindy is an exploration of frontperson Ellen Tiberio-Shultz’s gender, as well as the larger social impact of gender attributes and power dynamics in society. The record rejects gender stereotypes in a powerful manner: through simultaneously crushing yet beautiful vocals, powerful spoken statements of resistance, amplified synths and heavy walls of distorted sound that emphasize the frustration in Tiberio-Schultz’s emotive vocals.

On their website newsletter, Tiberio-Schultz spoke about the record’s meaning:

Existing in the patriarchy without benefiting from it feels to me like I’m under scrutiny, like people are looking at me and measuring me against what they think I should be and in the process rendering me a passive thing to be judged. So I tried to write about who I am without those expectations. I made this album to reject that passivity, and to take an active roll in shaping my own narrative as a queer, non binary person. Making these songs gave me a sense of clarity and strength in my gender and my queerness and I’m hopeful that it could do the same for other people.

Societal trends regarding gender are broken down starting from the opening track, “If A Tree Falls In The Forest.” The track builds on the philosophical question of whether or not there is a sound when a tree falls and no one sees it, but Ellen Siberian Tiger uses it as an analogy for the lack of centering queer voices in society and the additional effort it often takes for those voices to be heard. The track’s black and white video starkly emphasizes these messages, with Tiberio-Schultz’s singing directly into the camera, their mouth eventually being covered and losing their voice despite being wholeheartedly present. The track closes with the message to believe and listen to these voices that aren’t heard, “A tree fell in the forest and nobody saw it / I promise to believe.” “If A Tree Falls In The Forest” is a compelling opener that is only further expanded upon in the following tracks.

The record’s second track, “Drown,” embodies just about all of the components existing throughout Cinderblock Cindy that solidify its messages and their compelling effects. The track begins with a clear vocal delivery, enhanced by occasionally joined background harmonies and spurts of guitar and drums as Tiberio-Schultz begins to dissect traditional conceptions of gendered emotions: “Baby wants the ocean / he’s gonna drown / baby doesn’t need help / he’s a man now.” At the track’s halfway mark, Tiberio-Schultz’s distant vocals repeating “he’s gonna” lead the guitar and drum melody into a clear foreground with a catchy lead guitar. At the same time, their vocals become slightly clearer but echo with slight distortion in a spoken vocal delivery, discussing how they can’t embody masculine traits of emotion without being perceived differently on the basis of gender: “I’m expressive in all the wrong ways and sad for all the reasons / Isn’t that right? /  Isn’t that what you think?”

Tiberio-Shultz experiments with their vocal delivery range throughout the project. On tracks like “For Better Or For Worse” and “Grinding My Teeth” they showcase the clarity, and sheer rawness in their vocals. They draw on the familiar experimental rock outfit St. Vincent and the sonic style of Mitski in their mutual eloquent control of the shakiness in their intensely emotive voice that is full of purpose and knowledgeable delivery. Ellen Siberian Tiger’s gripping sound makes their lyrical messages clear.

Cinderblock Cindy’s title track is the record’s longest and arguably one of the more gloomily intense. It opens with the steady, thumping bass line of Collin Dennen surrounding Tiberio-Shultz’s vocals and a lead guitar that eventually makes way into a heavily distorted riff accompanied by the ferocious drums of Richard Straub. It closes with a crescendo of guitar and drums that amplify the shouts of Tiberio-Shultz, chanting “she is full.”

On their latest record, Ellen Siberian Tiger pointedly channels their self-description as a “feminist indie rock band with orchestral and punk influences.” Each track presents a different resistance to patriarchal structures, done so in a manner with the kick and intensity of punk music as well as using the variety of expressions in orchestral compositions. Cinderblock Cindy feels like Ellen Siberian Tiger’s own way of dismantling the gender binary through their experiences in society and relationships, but also serves as a place for listeners to lean into and apply their own experience.

Listen to Cinderblock Cindy below, and grab a download via Bandcamp here.