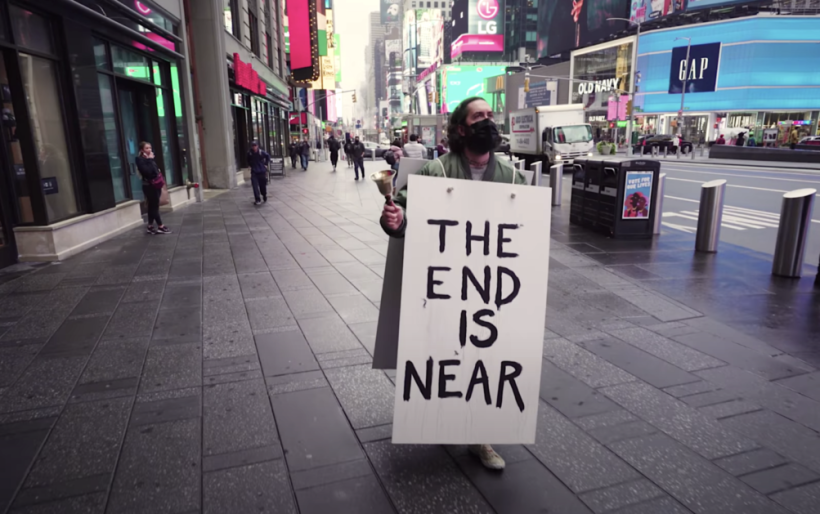 Nothing | still from video

Doomy shoegaze-inspired band Nothing try their hand as apocalyptic bell ringers in their music video for “April Ha Ha,” a powerful song from their latest outing The Great Dismal.

The video opens with singer-guitarist and songwriter Domenic Palermo walking around Times Square, fervently ringing a bell and wearing a sandwich board sign reading “The End Is Near.” There are levels of commentary in this visual: the oddly empty metropolitan intersection (empty for Manhattan, anyway) juxtaposed with the Palermo’s mask, the foggy air, and the rapturous message suggest a worse-case-scenario for our year of global pandemic. It also works as a critique on capitalism and consumerism, as Palermo rings his doomsday bell surrounded by Times Square’s gluttonous, mall-esque expanse of advertisements, chain stores, and corporate branding, while he passes by homeless folks crouched under an awning.

We see Palermo’s bandmates bring wearing the same sandwich sign in different locales — drummer Kyle Kimball under the el in Kensington, bassist Aaron Heard on South Broad Street with city hall in the background, and guitarist Doyle Martin on a suburban path, alongside a nuclear plant’s cooling tower. (Also in the burbs is fellow Philadelphian Alex G, who makes a cameo to sing the stirring bridge — “Isn’t it strange watching people try and outrun rain?” — in a soccer field while wearing a different sign, “This will never end.”)

Watch below, listen to The Great Dismal here (it’s outstanding), and order a physical copy over at Relapse Records.