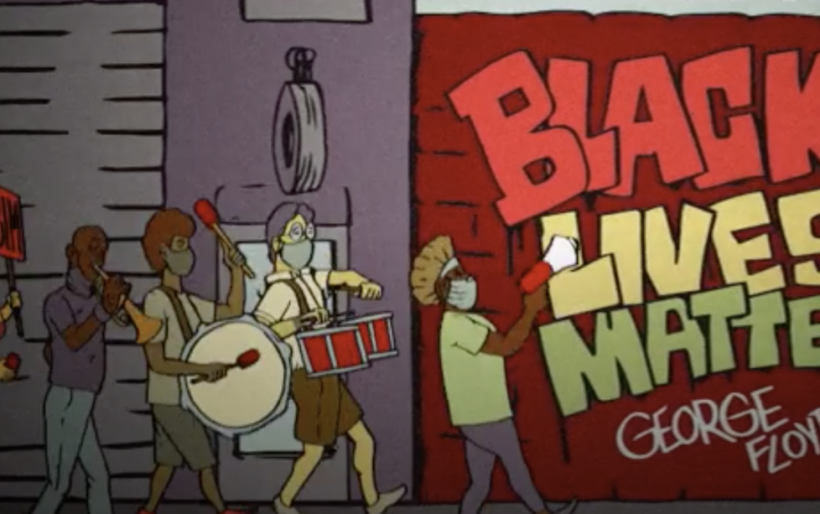 Don’t worry, this is not another article telling you to go vote. Instead this is a whole column dedicated to things you can do, things you can watch, and things you can listen to instead of constantly doom scrolling and waiting for the election results to come in. Cool? Cool.

We’ve all been in such a state of anxiety lately and it’s not like today is going to make things any better. Still, it’s probably worth it to at the very least try and de-stress just a little. The most serenity I’ve felt recently was when I was working on the second Grave Images article, the series where I take pictures of music-related graves in the Philly area and then write about the deceased, and hanging out by myself outside with nobody else around while doing some exploring. I’m not saying that everyone should find a graveyard to walk around — though again, you’re not going to run into too many people and it is pretty chill — but I’m sure you can think of something similar.

There’s a lot of new music that dropped in the past week, a bunch of shows, podcasts, and articles I want to highlight, and just a ton of distractions that might make you spend a bit less time on social media.

Let’s kick this off with a brand new track from Joe Jack Talcum, guitarist of The Dead Milkmen – side note: did you hear “Punk Rock Girl” during the Eagles game a couple weeks ago?! – and just one of my favorite songwriters. Joe has a new album coming out on Friday on This & That Tapes called Word Salad. While nothing is online yet, the label was kind enough to give us this preview:

Before I start down the path of music reviews, I just want to mention the one live stream I’ll be sure to watch later. No, not an election results roundup – you can have that open in another tab – but rather DJ Phil Yeah on Great Circles Radio doing “Two hours of ambient/jazz/dub/free association and all-around ‘Good Music.’” How can you go wrong with that, especially on election night?!

Alright, here are some things you can listen to RIGHT NOW instead of hitting refresh on the news:

Edit: Check it out, I was hoodwinked! This is PLOT’s first album but it was never up on their Bandcamp before. Because they uploaded it earlier this month and had posted about new stuff I got confused. Still, I stick by what I said: it’s excellent! So is their most recent album, 2019’s Caught Dead on Suicide Bong Tapes. They will have a new album sometime this month and have promised me a preview so I will be sure to bring you that next column.

I’ve been a fan of PLOT for a couple years at this point and fully expected to like this album but to be honest I am really, really loving it. All the elements of the post-punk band’s previous albums are there – noisy guitars, keyboards that sound downright no-wavey, real catchy drums – but there’s something about this one that is just so energetic and fun. While their last album, 2019’s Caught Dead, was a bit more metal, this new one is much more on the industrial side of things and flat out makes me want to dance.

Dromedaries is a jazz band made up of Julius Masri (Night Raids) on drums, Keir Neuringer (Irreversible Entanglements) on saxophone, and upright bassist Shayna Dulberger, who has played with everyone from William Parker, Bill Cole, Ras Moshe, and more. Their new one, made up of four improvisations each about 12 minutes long, is a really fantastic, energetic, and interesting piece of music.

Crushing d-beat punk is very much a mood right now and I have been listening to the debut from this West Philly band over and over again since it came out a few days ago. It’s angry, it’s LOUD, and it really makes me look forward to a post-pandemic world when I can finally see it live.

I’m not totally sure if this is a one person project or not – the Bandcamp is pretty vague – but the only Sweaty I can confirm is Jeff Ziga from Manual 7, AAJ, and Amateur Party. This is everything you want from a punk album: it’s fun, it’s rowdy, it’s catchy as all get out, and it’s kinda dumb in the best way possible. Also it’s short and to the point with the whole thing clocking in at about six minutes. Perfect!

On the 5th, the Philadelphia Philharmonic are doing a performance of Dvořák’s “Serenade” live via their website. Maybe you’re into classical music or maybe you couldn’t tell Dvořák from Debussy if your life depended on it but one way or the other you should get a ticket and watch this because a) Dvořák is great and b) you should get outside your comfort zone and try out new things. While going to the orchestra can definitely feel intimidating if you’ve never been, being able to watch these concerts via the internet is a great introduction.

The annual Philadelphia Zine Fest is going digital this year. What does that mean? Well, instead of pushing your way through a crowded Rotunda you can instead tune in on Saturday the 7th for an array of events including readings, workshops, and more. For details go to phillyzinefest.org. Not the same, sure, but this is an important community in our city and I’m stoked that they were able to put together this virtual fest.

That afternoon up in Fishtown the International Bar is hosting an outdoor record fair. I don’t know about you but I’ve been buying so much more music over the past few months. If I can’t spend money on going to shows, I might as well buy records. International Bar has been hosting these events every Saturday and I still haven’t gone to one so I am putting this on my calendar and I’ll see you there.

The next day one of my favorite local bands, the folk duo Bethlehem and Sad Patrick, are doing a livestream as part of the Music at Friends series. If you’re not familiar with the band, check out this video:

Also that night is a special Bowie-centric online karaoke fundraiser for Doobie’s, the long-running bar on 22nd that’s owned and run by David Bowie superfan Patti Brett. A Sigma Kid back in the day, Brett was crucial in the founding of Philly Loves Bowie week a few years ago. Like many small businesses in the city, her bar has been struggling heavily the past few months so this is a community effort to help out.

On the 11th the Free Library of Philadelphia is hosting authors Warren Hoffman and Elizabeth Wollman for an online talk about “Whiteness and the Broadway Musical” and how racism has impacted the stage. I’ve always thought that one of the best ways to look at huge issues like race and class is through a more narrow filter – in this case Broadway musicals – and I’m very excited for this.

The following weekend there seems to be a dearth of events except for another record fair on the 14th which makes it the perfect time to catch up on some prerecorded shows. And by that I mean the Sun Ra Arkestra Halloween gig that just went up online a couple weeks ago and we wrote about in this very publication. There’s also a really cool Ghosh livestream from this Halloween that is also now archived, a Joe Jack Talcum set also from Halloween, and last week’s Fire Museum Presents show with Erik Ruin’s animations and the music of Tara Middleton, DM Hotep, Nick Millevoi, and more.

Speaking of Millevoi, the guitarist was recently a guest on Mike Watt’s podcast – yes, that Mike Watt, the one from the Minutemen, fIREHOSE, and Dos – which is kind of amazing. I haven’t listened to it yet but it is on my list.

Another thing on that list is this interview with Joshua Brown from Ink & Dagger, Crud is a Cult, and Flagman. Brown has been working on a history of Crud, which was an absolutely legendary Philly hardcore band in the early 90s, and this podcast goes deep into that scene.

While you’re in 1992, check out this playlist Andrew Martini – Dissucks, Kill The Man Who Questions, Limp Wrist – put together for NTS Radio. It is a veritable who’s who of that era and includes tracks from Blatz, Filth, Nausea, Zed, The Skabs, and so many, many more. If you’re angry at the world and want to scream along to the hits, this is the show for you.

Since we’re on the topic of screaming, queer grindcore heartthrobs HIRS are looking for some people to do vocals on a bunch of unreleased tracks. See their help wanted ad below:

* BTW these are all old demos for songs that never made it to@some of our records over the last 6 years or so – Not brand new ones just yet ^_^ * Wanna join The HIRS Collective? We have 9 unreleased demos that need lyrics and vocals for our new record. The link for files and guidelines are in our bio. Submission deadline is November 12th, 2020.

I want to end this column with the absolutely wonderful new video from West Philly Orchestra. Illustrated by Keni Thomas, and animated by Rachel Goldfinger, this is a fantastic song with equally awesome visuals.

Alright! I will see all of you next time. Who knows what the world will look like in mid-November but I have faith! As always, feel free to send me any tips on Twitter at @talkofthetown.