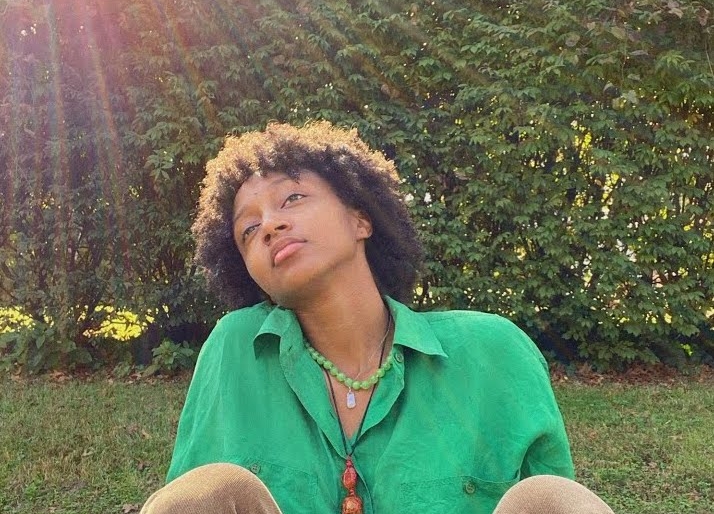 It’s not always easy to do what’s right for yourself, even if there is a glaringly obvious route to take. There come times when doubt and uncertainty prevent any forward movement, posing an intangible challenge that is often a greater barrier than anything in the physical world.

“I kick my doubts out the day I finally realize / My heart cannot expand if my mind is where the fear lies,” Philly singer-songwriter Emyne raps of one such circumstance on her song “Everything’s Alright LJ.” Her latest project, the hip-hop and R&B infused Golden, acknowledges these elements of reluctance, but they don’t stand big and tall. They exist so that the project can be written as a love letter to herself in an authentic way, without dismissing anything from Emyne’s path to finding strength and resilience within.

Golden is cohesive, not just in its structure that follows a chronological narrative, but in its message’s interconnectedness. The opening track, “Pluto,” starts Emyne in this position of uncertainty, singing over an airy synth to someone who makes her feel trapped. She shifts from rapping to singing with ease, expressing the clarity of following her heart, but still feels misled by this person that she wants to be free from. “Just trying to find myself” is the lyrical sentiment that makes “Pluto” the proclamation of finding self-sufficiency and empowerment.

“‘Let’s talk about 2014…’ (poem)” showcases Emyne’s brilliance with language in spoken-word form. The track feels like an inward transitional period, starting and ending in the same physical place of a mountain but entirely different internal settings: “In 2014 I felt my legs for the first time / There wasn’t a rocky road I couldn’t travel on/Or hot cement I couldn’t cool / My feet were tough and my legs were curious / My body was free.” At its close, she speaks to an inner liberation, “In 2020 I felt my wings for the first time.”

For Emyne, not only is artistic expression a source of personal healing, but it’s also a way of helping others. It’s evident that Golden seeks to give rise to self-love and reliance in all who listen. “God took her time with my gift / And I will honor myself / By taking care of my temple so I can show you the light / That’s always beaming inside me a star for eternal night,” she sings on the catchy “Release.” Emyne continues sharing the treasures of her newfound confidence in her sense of self on the album’s single, “Just Be,” where her rapping exudes an uplifting warmth surrounded by backing harmony and keys, “I know it hurt sometimes / Heart in the dirt sometimes / But that’s where it grows sunshine / Trust it will bloom give it time / But in the meanwhile just breathe / And when you smile show some teeth / And when you dance take up space.”

From her beautiful vocals, to her captivating lyricism and smooth melodies, Emyne is a light. Her introspective struggles quickly turn into an allegiance, realizing that in order win, one must overcome doubt and be on their own team. She doesn’t depart from genuine self-expression, adding bits of character through short, lighthearted words like shouting out her producer at the close of “Just Be.”

Golden also spares any toxic positivity in the light and hopefulness cast on listeners by acknowledging hardships along the way. Listening feels like an act of self-care as well as an observation of one’s journey of finding peace with the reality of life being a long-term relationship with ourselves. Golden’s final lines indicate Emyne reigning victorious in following her heart, “I know I’ve got this. And as long as breath and music flow through my bodies I will win.”